The Daily Barometer • May 21, 2018 • https://dailybaro.orangemedianetwork.com/6519/opinion/shea-be-mindful-discussing-mental-illness/ 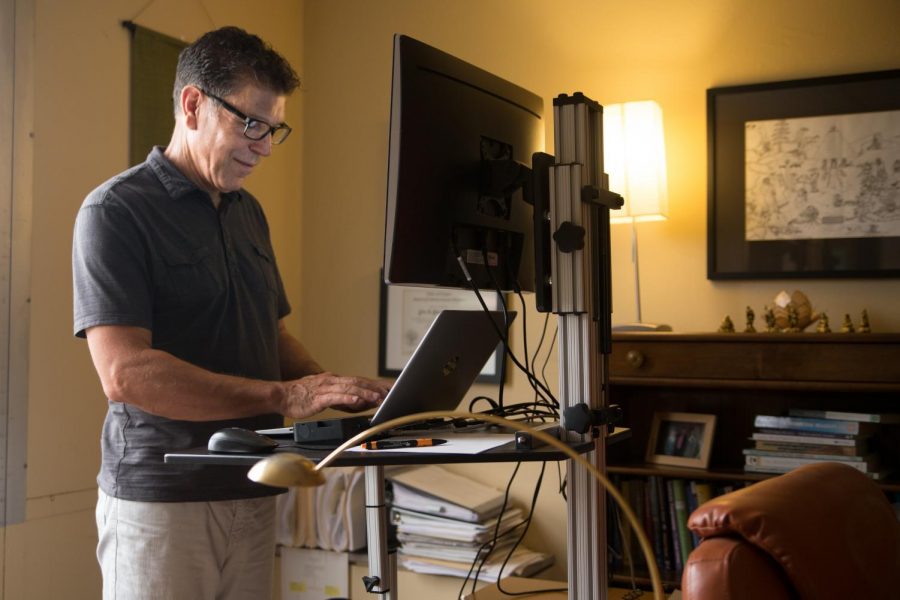 OSU suicide prevention coordinator Jim Gouveia working at his standing desk. Gouveia believes that finding balance and being true to oneself are beneficial to one’s mental health.

Connecting with individuals who grapple with mental illness can be difficult. The fear of not saying enough, compounded by the fear of saying too much, can be stressful. Ultimately, what people need is someone to listen, and tell them it is okay to feel how they are feeling.

However some phrases, many of which are commonly recommended as the best thing to say, can actually decrease the feeling of security which is needed for someone to speak out honestly about mental illness.

One such phrase is, “If you need to talk, let me know.” A strong support network with open, honest communication is one of the most, if not the most, important factors in mitigating the effects of mental illness. Unfortunately, movies, books and TV shows portray the individual valiantly struggling with mental illness on their own as a muted, romanticized figure, making people more likely to keep their anguish to themselves.

The word “need” in “If you need to talk” means that the person coping with mental illness must believe that they have reached a limit and can no longer cope on their own. It is difficult enough for an individual to acknowledge even the possibility that a mental illness might be more than they can cope with alone. Oftentimes, while someone may desire to reach out, they may feel that their problems are not pressing or legitimate to “need” to speak out.

According to the Oregon State University Suicide Counseling and Psychological Services website, suicide is the second highest cause of death for college students. Moreover, in the span of one year, almost 40% of college students will report feeling so depressed that they have difficulty functioning.

David Kerr, associate professor in the OSU School of Psychological Science, says that direct requests to spend time with and talk to someone can be good way to be supportive.

“Also, withdrawal from friends and responsibilities is very common for people with a mental illness, and it can make their situation worse,” Kerr said via email. “So another way you can be supportive is to gently nudge them to do something with you. People are less responsive to open-ended vague offers, like ‘Let me know if you ever want to hang out or study or something.’ So instead try something specific, like ‘Let’s go to Grocery Depot and eat something random,’ or ‘Come with me to Many Hands–I have to buy something for my mom.’”

Jim Gouveia, a staff counselor at OSU’s CAPS, says that empathy and acceptance are key to creating an environment where people feel good about speaking out about their mental illnesses.

“Use empathy, not sympathy,” Gouveia said via email. “Level the playing ground, be a witness not an expert.”

Mental illness is not necessarily a weakness. People who struggle with it have a deep strength and a special perspective. Nor is mental illness a hobby for people to be “so interested in,” which is another phrase which can make people less likely to share their pain. Thinking of people with mental illnesses as victims or fascinating creatures is highly detrimental to breaking down the stigma holding so many captive and silent.

Gouveia also suggests avoiding labeling words, used in sentences such as “You must be depressed.”

Kerr points out that it is crucial to recognize the multidimensionality of people, and understand that mental illness is just one facet to so many people around us.

“A person’s diagnosis is a description of something they’re struggling with, but it doesn’t define them,” Kerr said via email. “She is a student, friend, RA and distance runner, and she also has depression.”

Nobody said that achieving a culture where detailed discussions about the effects of mental illness would be easy. It will require constant refinement of the way we think about people with mental illnesses, and introspection as well. This is only a start.