The Daily Barometer • May 16, 2018 • https://dailybaro.orangemedianetwork.com/6544/daily-barometer-sports/no-2-osu-baseball-dominates-san-diego/ 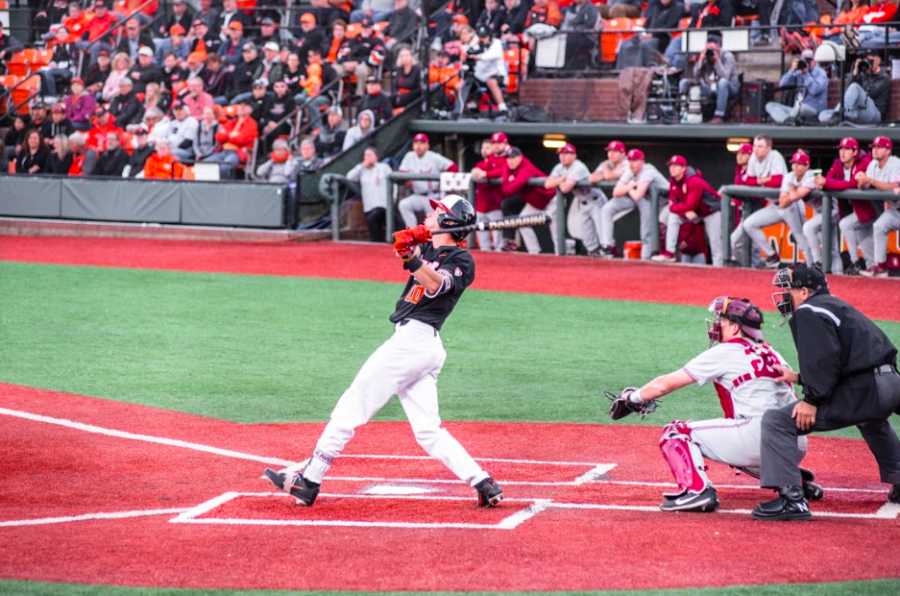 Senior infielder Michael Getler hits the ball in the first game of a three-game series against Stanford on May 11. OSU won the series with two of the three games.

As the Oregon State Beavers come out of a thrilling weekend and a series win over the Stanford Cardinal, they faced the San Diego Toreros on Monday and Tuesday and won both games, displaying a dominating performance.

On Monday, the game was put to a close by mercy rule in the seventh inning with a score of 23-6, and again on Tuesday with a final score of 19-6.

After the Tuesday’s game, the Beavers boast the No. 3 batting average in the nation with a .325 and an on-base percentage of .420, ranking No. 4 in the nation.

As for individual stats, junior infielder Cadyn Grenier is currently second in the most consecutive game hits in OSU history with his 42nd hit in the 25 game streak. Just above him is Jeff Brauning with 31 games in 1989.

“It’s just a stat, you know. I go up every at-bat and get a hit, so you expect to get a hit every game,” Grenier said of his streak. “Since baseball is so difficult, it’s kind of cool to get on a roll like this where you have at least one every single game, but it hasn’t been easy.”

Freshman pitcher Christian Chamberlain made his third starting appearance on Tuesday and did not let San Diego get a run in the first 3 ½ innings he played. With those stats, Chamberlain put up a 3.69 ERA.

Tuesday’s game started off with a real bang. In just the first inning, the beavers scored a total of five runs, one after another. As the runs kept coming in, the Torero’s let the Beavers keep racking up the points.

In the second inning, the Beavers topped the previous innings run count by three, leaving them with a total of eight runs, and pushing the score up to a whopping 13-0.

One play that stood out from the rest was sophomore catcher/infielder Adley Rutschman’s homer, which resulted in a triple RBI marking his 60th of the season. The only player to get more RBI’s throughout the season is junior outfielder Trevor Larnach, who sits at 62.

It marks a special time in Beaver baseball in that this has been the first time that OSU baseball has two players above a 60 RBI in school history, and they’re not even done with the regular season.

“It’s a compliment to him (Larnach) and we don’t really focus on that, we just kind of stick with our process,” Rutschman said. “Our focus right now is just making it to Omaha.”

After Tuesday, Rutschman leads the Pac-12 with a .413 batting average.

After two innings with no runs from either team, the Beavers scored three more runs in the fifth and moved the score up to 16-0. But in the sixth inning, the Toreros put their first four runs on the board, bringing it to 16-4.

After three runs by the Beavers in the sixth, and two runs by San Diego in the seventh, the game was ended by mercy rule with a final score of 19-6.

Over the course of the five games that the Beavers have played for over five days straight, Beavers head coach, Pat Casey, is not too fond of the performance in the bullpen.

“We really need to get our bullpen to pitch. Our bullpen has been inconsistent and we just gotta get a lot better out of the pen,” Casey said. “I’m looking for that third starter to really establish himself.”

Speaking of bullpen, there was one question on everybody’s mind. Was senior outfielder Jack Anderson warming up to pitch?

This oddity left people across many platforms of social media clueless as to what was going on. On Twitter, #letjackpitch made its rounds, encouraging to let the senior pitch because the lead was so high throughout the game.

The OSU Beavers travel south to take on the University of Southern California Trojans in a three-game series starting Friday, May 18 at 7 p.m. You can watch live on the Pac-12 Network or listen live on the Beavers Sports Network.