The Daily Barometer • May 29, 2018 • https://dailybaro.orangemedianetwork.com/6547/daily-barometer-sports/athletics-announces-top-scholars-in-each-sport/ 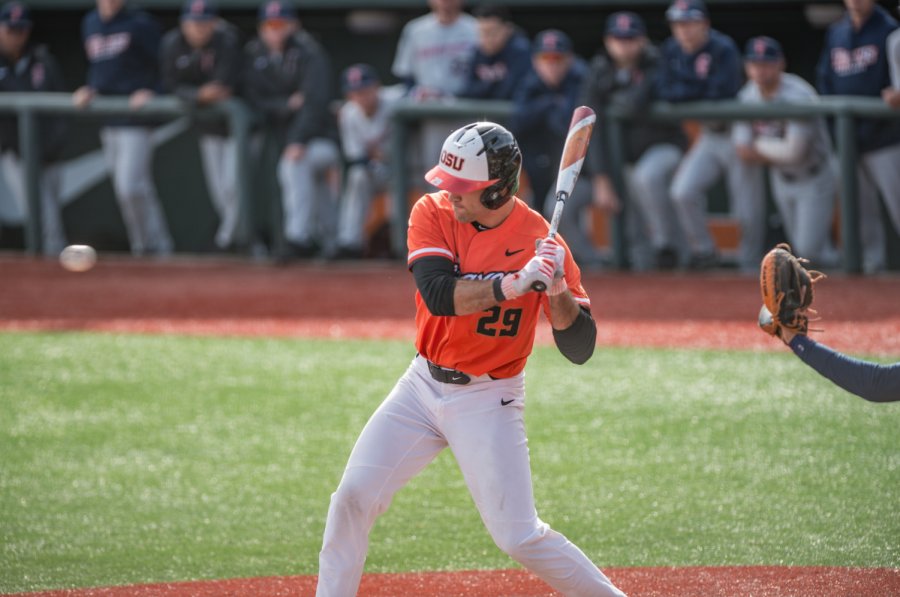 Senior outfielder Jack Anderson steps up to bat in Goss Stadium. Anderson held a .308 batting average for the 2018 season.

What are some of the study methods you use to stay on top of your grades?

Anderson: “I like studying alone a little bit, but being able to find people that were other athletes that were kind of on the same schedule as me helped find some group studying. I think group studying is great, you’re kind of able to toss around ideas. On the road, when we were traveling, I wasn’t able to go to the pool everyday after the game because I had to go focus on studying. For me, it’s just always kind of been my head in the books, really conceptualizing the ideas and just putting the time in. I couldn’t just walk into the test feeling uncomfortable, I had to put the time in everyday. Before or after practice I would either be at the Beth Ray Center or be back at home studying.”

Is there a difference academically between your first year and this year?

Anderson: “I wasn’t on the team my first year, so my first year was kind of just working out. I’d be hitting for baseball, then I’d also be doing school, so that first year was kind of nice to just set up my academic career. Once I made the team my sophomore year as a redshirt freshman, that was one of the more rougher years for me with school. Junior year, I started playing a little bit more, so I think that was one of the busiest years for me. I was playing just about everyday, but also having to focus on 15 to 16 credits a term. Sophomore and Junior year were definitely some of the tougher few years for me.”

How are you able to juggle sports and school so effectively?

Anderson: “What helped me was that I played three sports in high school, so I had to figure out how to kind of balance school and sports. It wasn’t as intense as it has been here, but I think those four years in high school just balancing all three of those really gave me the groundwork a for figure out how to really do it at a collegiate level. It’s now coming to an end, and I feel like I’ve done a good job and I feel happy with how I’ve done both athletically and academically.”

Pivec: “Bio-health sciences, and then you can pick whatever special you want, and I’d like to do pre-med.”

How many math classes are required for that major and special option?

Pivec: “Thankfully, I had some credits from high school, so I got the calculus and calculus two credits from there, so I didn’t have to take that here. But I took stats class, I know genetics had like some math component. I don’t think I have to take too many specifically math, but physics, I’m in that right now and I’m almost done with my last term, so I’m excited.”

What are some of the study methods you use to stay on top of your grades?

Pivec: “It all started back in high school, I got into the habit of after practices or in between something, always try to work on something consistently. If you have a 30 minute pocket of time, you try to use that time to study. Usually, I’ll study during lunch and then I’ll study a lot after practice.”

Is there a difference academically between your first year and this year?

Pivec: “Definitely yeah, I think after I got all of the baccalaureate core out of the way, and started getting more into more major-specific classes, so I’m taking a lot more science and math. I like math and science, but it definitely adds up the credit hours and is a lot more time dedicated to those major-specific classes.” How are you able to juggle sports and school so effectively? Pivec: I think it’s just trying to dedicate the time, I know we have a lot of great resources here at Beth Ray. We have tutors for missing class due to travel, I know it’s hard to make up some of the information. It’s great to be able to have those resources, and then just trying to make connections with somebody else in the class, like make a friend, and they’re able to give you notes of you were gone for that day, so thankfully a lot of help in school and in classes.”