The Daily Barometer • May 21, 2018 • https://dailybaro.orangemedianetwork.com/6555/daily-barometer-news/search-for-sanctuary-here-to-stay-fights-for-undocumented-student-support/ 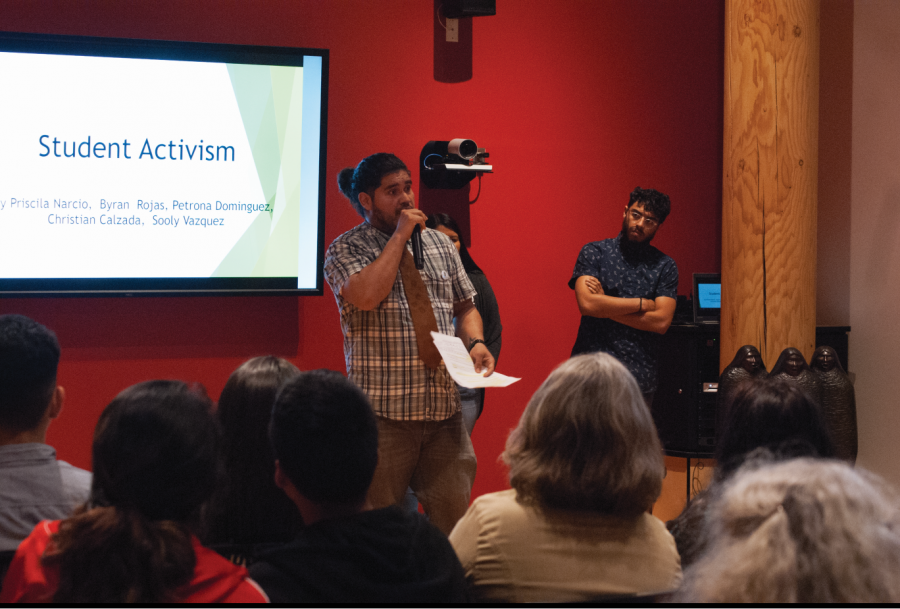 Bryan Rojas talks about his experiences in education and activism throughout his college career in the Native American Longhouse, May 15 2018.

Judge John D. Bates of the Federal District Court for the District of Columbia ruled April 24 that the protections of the Deferred Action for Childhood Arrivals program, otherwise known as DACA, would stay in place for an additional 90 days, pending a better explanation for canceling the program, according to the New York Times.

As Oregon State University is a sanctuary campus, the court ruling and any further legislation may have an impact on that status, but that remains to be seen.

Janet Nishihara, the director of the Educational Opportunities Program, often works with undocumented students and helps them find resources. She has also been working to determine the impact of the court ruling on OSU students.

“If the recent court ruling has an impact on OSU students, it’s in that in less than 90 days, there may be more students eligible to apply for DACA in addition to those who need to renew,” Nishihara said in an email. “It’s all sort of in limbo right now. They’re still renewing applications for students, and I think they’re still taking new applications for students. But there’s still also lots of raids on families, trying to find people.”

In her work with the undocumented students in EOP, Nishihara has advised and collaborated with the newly formed Here To Stay club, which advocates for the support of undocumented immigrants and DACA recipients, on both a local and national scale.

Priscila Narcio, the president of Here To Stay and DACA recipient, began the club after the success of her similar organization at Chemeketa Community College.

“When I finished at Chemeketa, I planned on creating (a club) once I enrolled at OSU because there was a need for students to have support at a university, and there was nothing like this already created,” Narcio said in an email. “I myself am a DACA recipient, and I know that having a support group for students like myself is helpful because accessing higher education while being undocumented is nearly impossible. Our group is focused on advocating for the undocumented community and fighting for access to higher education.”

Anna Park, the vice president of Here to Stay, spearheaded policy work projects within the university, such as working to change the wording of the sanctuary campus laws.

Customs and Border Patrol tabled at EOP’s non-profit opportunities career fair last term, startling staff and students alike. “Border patrol can be a terrifying organization for people who are undocumented or from mixed-status families because of the connotation,” Park said. “It kept people from going to the event who may have been interested in non-profit work, or who wanted to speak with the companies that were there.” Narcio was concerned and upset by what she saw as a failure of OSU to fulfill its duties as a sanctuary campus.

“OSU claims to be a sanctuary campus; however, the policy is very vague as to who can and cannot be on campus,” Narcio said in an email. “ The message that is sent when CBP is on campus is that undocumented students, DACA recipients and students from mixed-status families and their families are not welcome.”

After speaking with the Career Development Center about not allowing border patrol back, Narcio and Park found that they were planning on tabling again at the spring career fair. In response, they decided to stage a protest.

“We don’t think it’s inclusive or celebrating the diversity that we’re supposed to have on campus, which is in the values of our university,” Park said.

Narcio said Here To Stay threatened with a student-led demonstration to protest CBP being at OSU.

“After the CDC heard about our protest, they contacted CBP to let them know about the student demonstration,” Narcio said in an email. “CBP pulled out of the career fair, which was what we wanted. However, it was not the CDC that told them that they could not come, but was instead the CBP’s choice to remove themselves from the situation.”

In later interactions with the university, Narcio and Park were told CBP could not be prevented from coming to campus due to the vague wording of the sanctuary campus statements.

Nishihara said the university can’t discriminate a federal agency from participating in the career fair if they meet the criteria for involvement, which CBP does.

“We do have a plan being developed for which employers will be invited to participate in the non-profit fair in the future,” Nishihara said.

To prevent CBP from coming back, the Here To Stay Club has been working on a policy proposal for the sanctuary campus statements.

“After meeting with the CDC, they expressed that they could not change the policy allowing CBP to come to campus due to the unspecificity of the sanctuary campus policy,” Narcio said in an email. “We hope to work with Ed Ray and other administrators to refine this policy and define what it truly means to students for OSU to be a sanctuary campus. We hope to prevent CBP from returning and to ensure that our campus is safe and inclusive for all students.”

Juan Navarro, a graduate student in OSU’s College Student Services Administration Program, is learning about the programs the university has to help its undocumented population.

“The university has had an undocumented student task force that has been made of faculty members and staff from various departments and job titles who come together and create a plan for how to better the experience of undocumented students,” Navarro said. “One of the things they do is they work alongside us students; if we need help writing a proposal, they’ll point us in the right direction for what needs to be in it and who it needs to be presented to, so we can create the best end product.”

Nishihara, who is part of the task force, said she does her best to connect the students with resources once on campus.

“If a student is undocumented but is not DACA, they can’t work, so that’s a big concern. How do we help students find support, how do we coordinate with other offices that are providing support for students, how do we make people more aware of the issues that some of these students face?” Nishihara said. “Everyone has been really understanding so far, everyone’s been really supportive across campus. Unless they’re federally funded, they’re able to support the students, so that’s been really good.”

Navarro is working to determine factors that keep undocumented students in school and on track for graduation.

“My focus is on identifying what successes keep undocumented students here at institutions so we can complete our degrees and become contributing members of society,” Navarro said.