The Daily Barometer • May 25, 2018 • https://dailybaro.orangemedianetwork.com/6606/daily-barometer-news/andrew-oswalt-fails-to-gain-seat-on-student-fee-committee/ 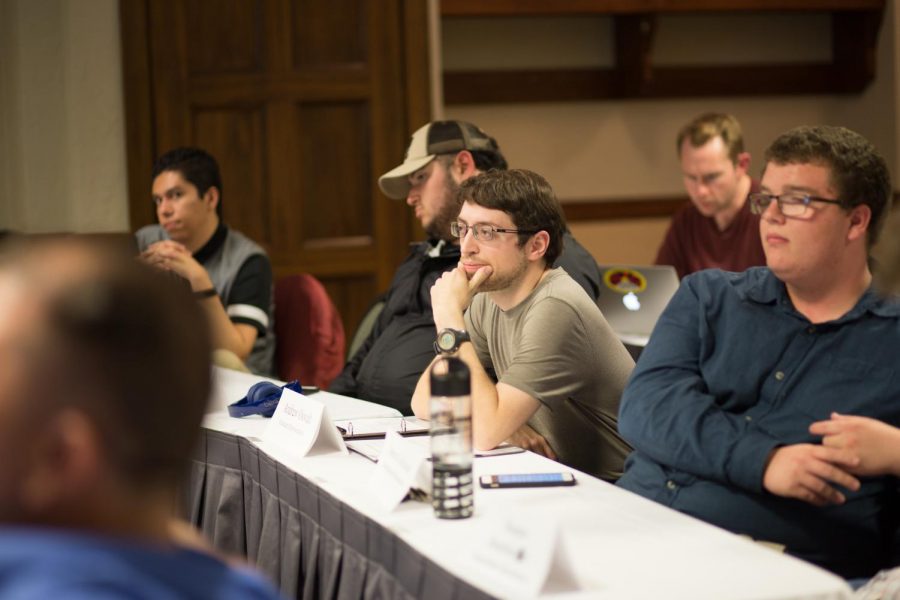 Andrew Oswalt (center), a self-described member of the "alt-right", participating in a House of Representatives meeting in January 2018.

White nationalist Andrew Oswalt will not serve on next year’s Oregon State University Student Fee Committee, which recommends fee levels for 10 units and over $30 million of student fees.

With 3,412 eligible students opening the ballot in the Associated Students of Oregon State University special election, Oswalt received the least support at 236 votes. The four candidates elected to serve on the SFC are Radhika Shah, Jordan Fee, Alex York and Andrew Damitio.

ASOSU Chief Elections Officer Josh Kaufman credited the unprecedentedly high turnout for a special election to Oswalt’s candidacy, as well as sending multiple allstudent emails. These messages, with links to the ballot, ensured all students had the means to vote if they wanted to.

“It is really important that people in these communities know that folks are with them, and not with Mr. Oswalt,” Kaufman said. “If you look at the numbers, the students of this university are overwhelmingly with marginalized communities and against Mr. Oswalt and the views he represents.”

The four elected at-large members will join 10 liaisons representing each of the units funded by student fees. These include Diversity and Cultural Engagement, student tickets to Beaver athletic events and the Human Services Resource Center, among others. Liaisons were nominated this spring by each unit and approved by sitting ASOSU President Simon Brundage, Kaufman said. All SFC members are subject to confirmation by the student government’s Senate, which will meet Tuesday at 7 p.m. in Memorial Union room 109.

In previous years, special elections have been used to fill SFC seats in the middle of the term. This year the election was held before the term began to make it a democratic process, Kaufman said.

“Any vacancies that occur next year will be up for incoming President Justin Bennett to appoint, but we did not feel it would be ideal to leave those up to presidential appointment going into the term,” Kaufman said.

The other measure on the ballot, a proposed rewrite of the student government’s constitution, passed with 2,319 voting in favor, 254 voting against and 839 abstaining (481 actively voted to abstain and 358 passively abstained by not responding to the question). The rewrite includes language specifying that ASOSU represents all OSU students not already represented by another student government, such as the Associated Students of Cascades Campus in Bend.

“The real impact and purpose of doing this is to reflect the administrative reality in this university, which is that we have branch campuses, which was not the case 10 years ago when the constitution was written,” Kaufman said.

Under the new constitution, the ASOSU House of Representatives will return to its original size of 25 members from 35, which Kaufman hopes will make future races more competitive and lead to fewer vacancies during the term.

“That will be an important thing for students next year, because their vote in these elections will be meaningful as opposed to symbolic,” Kaufman said.

Orange Media Network, of which The Baro is a part, receives some of its funding from student fees.