The Daily Barometer • May 14, 2018 • https://dailybaro.orangemedianetwork.com/6622/daily-barometer-news/osu-air-force-rotc-to-host-four-star-general/ 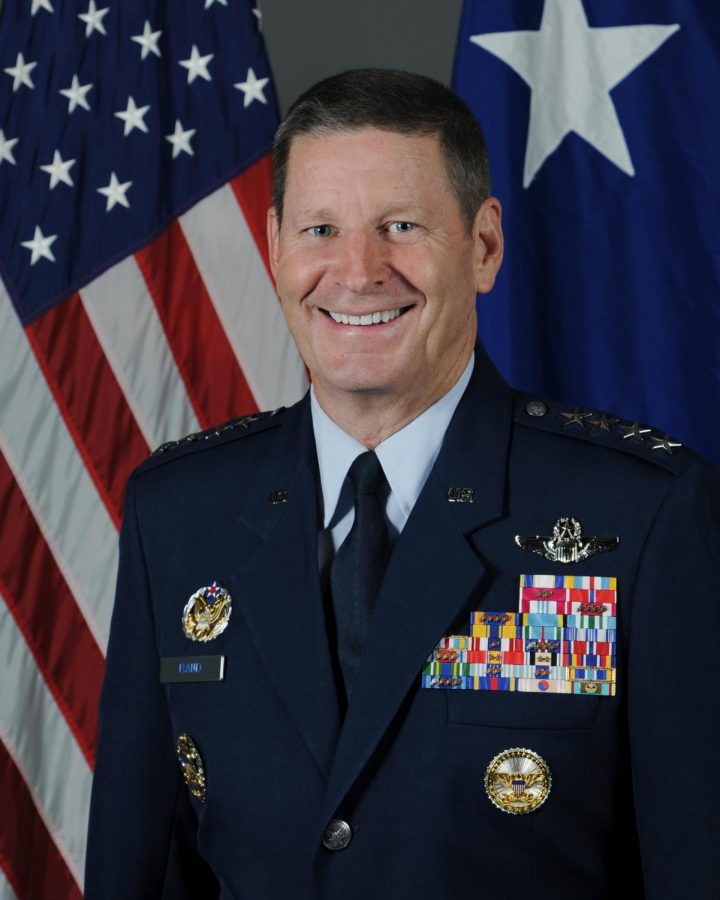 Four-star General Robin Rand will speak at the Air Force ROTC Dining Out event May 19, beginning at 10:15 a.m.

Dining Out is an all-day annual event consisting of a morning award ceremony and an evening dinner according to Robert Ferguson, the Vice Wing Commander and Dining out officer for Air Force ROTC.

“Dining Out is the pinnacle of [Air Force] ROTC,” Ferguson said. “It’s basically an end of the year celebration.”

There will be an award ceremony held in the morning where awards and scholarship money are handed out to people who have done an exemplary job throughout the year, Ferguson said. In the evening there will be a dinner that is more tailored to family and friends that will display what AFROTC does as well as a guest speaker and a send off video made by the seniors in AFROTC.

“In years past the guest speaker has been a colonel,” Ferguson said. “But this year we got a four-star general.”

According to Sam Walker, the Wing Commander within AFROTC,  Ferguson’s ability to get Rand to be the guest speaker at the dinner came as quite a surprise.

“That’s a great question,” Walker said about how AFROTC was able to get a four-star general as their guest speaker. “Nobody knows.”

According to Ferguson, a formal process is in place when contacting a person that has as high of an importance as General Rand. As such, Ferguson needed to go through Colonel Brainard, the leader of OSU’s AFROTC Cadre, the group of Air Force officers tasked with leading and training the AFROTC Cadets, in order to ask Rand the guest speaker.

“I told him (Colonel Brainard) that my grandmother was his (Rand’s) fifth grade teacher at Shasta Elementary,” Ferguson said. “I don’t know if that helped persuade him, but he was also going to be in the area around this time, so I think that was ultimately why he said yes.”

Rand holds not one, but two very important titles within the United States Air Force.

“He is the Air Force Global Strike Commander,” Walker said. “And that basically means that he’s in charge of all of the Air Force’s nuclear weapons.”

According to Ferguson, Rand’s previous experience makes him an especially good person to have as a guest speaker on top of his position.

“I think he will do a good job with whatever he says,” Ferguson said. “Before he was in charge of Global Strike Command he was the commander of Air Education and Training Command. That means he was in charge of all of the Air Force’s training, so ROTC, the academy, OTS, even once you’re on active duty and you’re learning whatever you job is at the time.”

As for OSU’s Air Force ROTC detachment specifically, it is always looking to train and perform as the best detachment, constantly putting out the top cadets in the nation, according to Walker.

“Every year our drill team goes down to SCITM (South California Invitational Drill Meet) and in the past two years we’ve won trophies down there,” Walker said. “We also just had two cadets graduate as distinguished graduates, which is the top 10 percent of cadets in the entire nation, and having two in the same detachment is very rare. It’s really prestigious just to be selected as one, and they both were selected and were commissioned last term.”’

This year’s Dining Out event will be happening on May 19. The hour long morning award ceremony being held in LINC 128 starting at 10:15 a.m. and is open to the public. The about four hour dinner in the evening will be hosted in the Toyota Club of Reser Stadium at 6 p.m., with tickets to the dinner having already been sold.