The Daily Barometer • May 29, 2018 • https://dailybaro.orangemedianetwork.com/6628/daily-barometer-news/memorial-day-honors-fallen/ 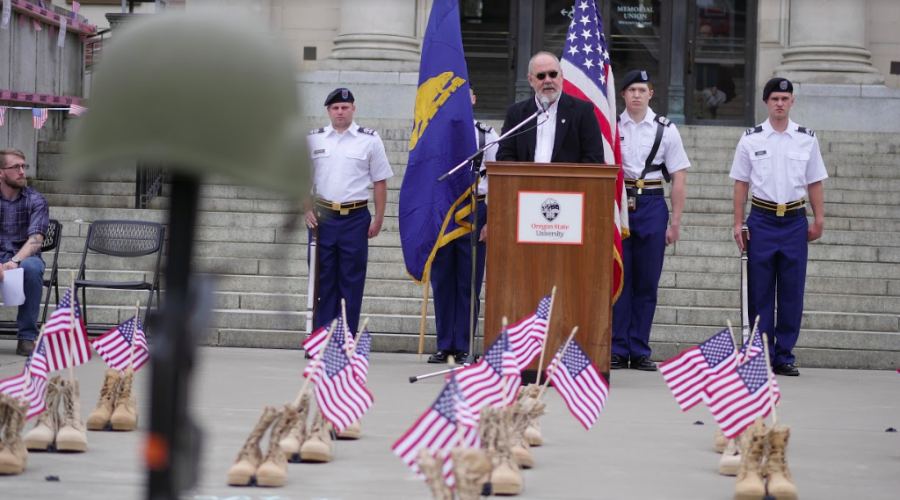 Members of the OSU Reserve Officer Training Corps and others honor fallen service members in front on the Memorial Union Monday.

It’s not just a three day weekend. Memorial Day, observed on the last Monday in May every year, recognizes those who have lost their lives serving in the U.S. Armed Forces. At Oregon State University, where military education has been included since the program was nicknamed the “West Point of the West”during World War II, student veterans view the holiday in a different light than their civilian counterparts.

Military and Veteran Resources Advisor, Willie Elfering, said Memorial Day different from other military holidays. “Memorial Day was established to pay honor to those who paid the ultimate price for our freedom— dying in combat,” Elfering said.

Elfering himself has been involved with the Armed Forces since 1986, eventually becoming the command sergeant major of the regional training academy in Oregon. Elfering comes from a family with a large military background, including his father, brother and nephews.

“I knew Memorial Day wasn’t just another neat three-day weekend we got off, but I didn’t have any real connection to it,” Elfering said. “Through a couple combat theatre deployments and having faces and names and laughs and voices that are connected to those names now, it means a lot more.”

Many service members say it’s rare for someone to be the first in their family to serve, Elfering noted. This is true with Jacob Mogler, an OSU senior studying Digital Communication Arts. Mogler was 22 with one and a half years of college under his belt when he began service, following in the footsteps of both his father and brother.

“There’s a legacy there,” Mogler said. “I joined the Marine Corps and I was in for 3 1/2 years and then immediately went back to school when I got out. There was something bigger than just getting college paid for that got me to sign up.”

Fellow Marine Corps veteran and OSU student studying nuclear engineering, Krystle Wolfe, said the particular culture of respect, unique to military families, can be difficult for others to understand.

“We’re finding more and more that there’s a disconnect between the civilians, the veterans and the dependent section,” Wolfe said. “We have started marrying into the service because there is the disconnect. We want someone with the same views.”

Finding this connection herself, Wolfe’s husband serves as a drill instructor in San Diego. Wolfe, who is also a mother of five, chose OSU not only for its program, but for its proximity to her husband.

“The military service gave me discipline so I can study more,” Wolfe said. “I have one year left, I already have an associate (degree) in science and I’m almost done with my bachelor’s (degree).”

On campus, Wolfe connects with other veterans through their shared experiences and attitudes.

To accomodate students and other members of the OSU community who have served, the Military and Veteran resource center operates in Snell Hall. Additionally, the Memorial Union has a small lounge with a capacity of 47. Beyond what is currently available, Wolfe hopes to see a veteran’s center built on campus.

“We have our own way of holding ourselves, our own languages, our views, opinions, beliefs. It gives us an actual location that is ours,” Wolfe said.

For those disconnected from the military community, Elfering asked that they remember the sacrifices of those who served in the military.

“Take a minute to just think about the freedoms that they do enjoy: whether it be freedom of speech, freedom of press, freedom to bear arms,” Elfering said. “There are folks that have gone before us that have paid with their lives.”