The Daily Barometer • May 29, 2018 • https://dailybaro.orangemedianetwork.com/6645/opinion/opinion-trump-changes-the-nation-bigly-on-twitter/ 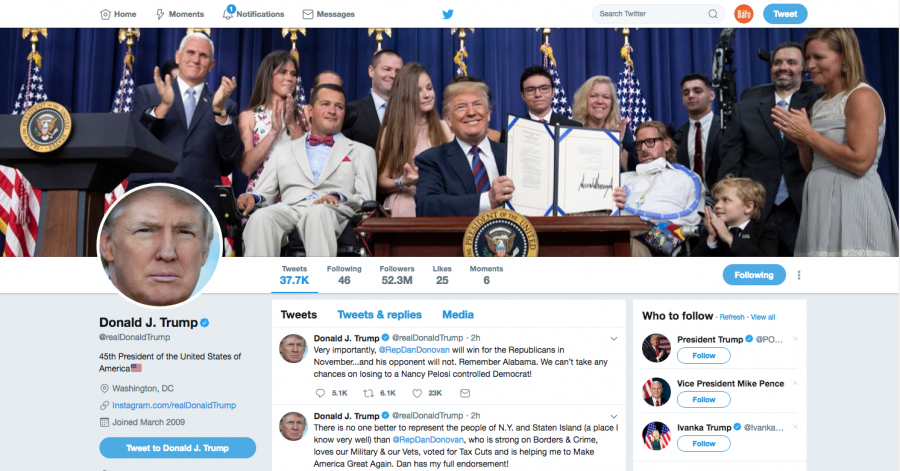 A screenshoot of President Trump's twitter feed, where his words reach millions and can have an impact on international affairs.

President Donald J. Trump’s tweets are infamously limited in vocabulary, but cover a wide range of subjects and have the ability to influence the real-time behavior of the nation.

The President’s unique lexicon has revitalized “bigly,” a word that has been used infrequently since the 1800s, according to the Oxford English Dictionary. His habit of speaking in short, punchy sentences, often punctuated by the declaration of a person, place or thing as “great” or “wrong,” is especially noticeable in his tweets.

According to Trump Twitter Track Web, a web app created by Oregon State University computer science seniors Brandon Dring and Katherine Jeffrey, in the last year Trump tweeted “great” 659 times, “people” 307 times, “news” 265 times and “America” 225 times. Other words of note include “fake” with 231 occurrences, “Trump” with 228 and “Russia” with 111.

“Trump has lived his life as a billionaire, pretty much doing and saying anything he wants. He might be the leader of the free world, the most powerful man on earth, and have 52 million Twitter followers. But, it doesn’t stop Trump from announcing his unfiltered thoughts to the world,” Dring said via email when asked why he studied Trump’s tweets.

“Trump posts a lot of Tweets, so there was plenty of data to work with and it’s so culturally relevant right now,” Jeffrey said via email.

Trump’s limited vocabulary has caused his intelligence and mental fitness for his position to be publicly called into question. In response, Trump tweeted that he was a “very stable genius” and “like, pretty smart.”

The President, tweeting at almost all times of the day and night, often changes the face of the nation with his words. Notably, he has often affected the legal success of his own policies with his commentary, and his anti-Muslim tweets were found to be correlated with offline hate crimes against Muslims.

Both the Trump administration’s travel ban on immigrants from Iran, Libya, Somalia, Syria and Yemen, as well as the ban on openly transgender members of the military, have been contested in U.S. courts. Both legal battles have also cited Trump’s tweets as evidence.

While appeals against the travel ban are still being reviewed by the Supreme Court, the ban was previously overturned on grounds that Trump’s tweets indicated that it was aimed at Muslim countries. Opponents continue to cite Trump’s anti-Muslim tweets and statements as evidence that the ban discriminates against predominantly Muslim countries in ongoing legal arguments, according to the New York Times and Fox News.

When the Trump administration’s ban on transgender military members was overturned on October 31, 2017 by U.S. District Court Judge Colleen Kollar-Kotelly, she used images of the tweets in her ruling. The Trump administration contended that the ban would increase unit cohesion, morale, preparedness and cut costs, according to the Military Times and the Washington Post.

A recent study found that after Trump tweets anti-Muslim sentiments, hate crimes against Muslims spike in countries with high concentrations of Twitter users. In December 2015, after Trump suggested an anti-Muslim ban and accused the U.K. of “trying hard to disguise their massive Muslim problem” over Twitter, the FBI reported that the number of hate crimes against Muslims in the following week increased from 5 to 25.

Trump wields enormous power with only 280 characters, and exercises it frequently. It is remarkable what one man, who tweets most often at 7 a.m. Sunday and 5 a.m. Wednesday, can do when he presses TWEET.