The Daily Barometer • May 21, 2018 • https://dailybaro.orangemedianetwork.com/6651/daily-barometer-news/asosu-holds-special-election-to-fill-open-student-fee-committee-positions/ 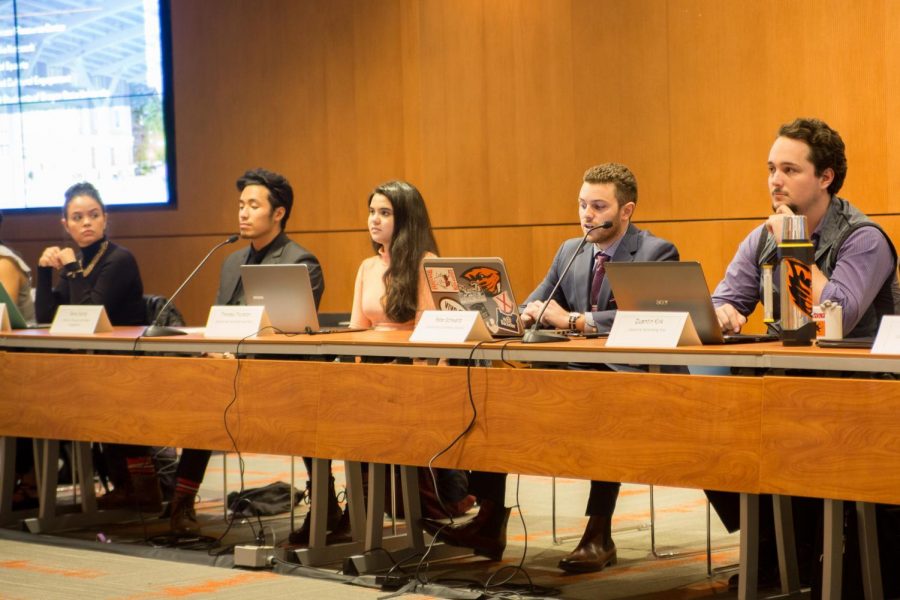 White nationalist Andrew Oswalt running for one of the seats.

The ballot for this year’s Associated Students of Oregon State University election became available Thursday, with seven candidates running to fill four open seats on the Student Fee Committee, which oversees over $30 million of student fees.

The SFC is an independent committee inside the ASOSU executive branch, which reviews the budgets of each of the 10 units that receive student fees and makes a fee level recommendation for the ASOSU Congress to vote on, said incoming committee Chair Theresa Thurston.

The programs, from Diversity and Cultural Engagement and student tickets for Beaver athletic events, to the Family Resource Center and the Human Services Resource Center, appoint liaisons to sit on the committee and advocate for their budgets. The winners of the special election will fill four at-large seats, which are meant to represent the interests of the student body as a whole.

Andrew Oswalt, a former ASOSU graduate representative known for expressing white nationalist views, is running for one of these seats. He used his candidate biography to include links to information regarding intelligence differences between races and anti-Semitic material. Oswalt appears on the ballot under his preferred name ‘rex imperator exsulatus,’ a Latin phrase meaning “king emperor in exile.”

The student government, which held a vote to remove Oswalt from his position in Congress last term, has no power to disqualify a student from running for office in the future. Furthermore, the Elections Committee has limited authority to police how candidates choose to present themselves on the ballot, said ASOSU Vice President and Chief Elections Officer Josh Kaufman.

“Because we have no predetermined rules for what could be included in the candidate biography, we felt that we cannot and should not change the rules retroactively to exclude one candidate,” Kaufman said. “We also want to be clear that every candidate has the same opportunity to write their personal platform statement, but those do not reflect ASOSU, the Elections Committee or OSU as a whole.”

Kaufman said the committee was concerned that treating Oswalt any differently than another candidate would set a dangerous precedent for excluding students from seeking election based on their beliefs. “

I will personally say that I find Mr. Oswalt’s views reprehensible and every other member of the Elections Committee does as well, but we are not in the business of censoring what candidates say,” Kaufman said. “As someone who personally holds an identity that Mr. Oswalt mentioned in his candidate statement and biography, I understand the harm that this can cause, but ultimately it is a decision that the Elections Committee had to make and did not take lightly.”

Austin Carsh, another candidate for one of the four seats and the current executive director for government relations within ASOSU, was not aware that Oswalt was running when he declared his candidacy, but said this knowledge added a sense of urgency to his campaign.

“In my time on the UBC, reviewing the proposed CAPS increase and looking at Student Health Services fee, I think I have good experience balancing the widely-felt impact of taking students’ money with the deeply felt impact of who these units are helping,” Carsh said.

For Thurston, who served as a member of the SFC this year, successful members are able to take in complex information about each of the units and hear others’ perspectives.

“A service that may seem trivial to one person is an incredibly important experience to another—being able to balance extremities into options that best serve the student body is very important,” Thurston said in an email. “Most importantly, committee members must be willing to commit time to thoroughly examine the information provided in order to best serve students. This expectation is what I will work to ensure as chair.”

The incoming chair believes voting for the candidates they align with is an important way for students to have an input on their fees, Thurston said.

“The lack of candidates that we had in the last election seems to indicate that OSU students don’t have on their radar that this is where students can influence fees,” Thurston said via email. “If you think that it’s valuable to have student influence on student fees, please vote.”