The Daily Barometer • May 9, 2018 • https://dailybaro.orangemedianetwork.com/6683/daily-barometer-news/controversial-preachers-evangelize-on-the-osu-campus/ 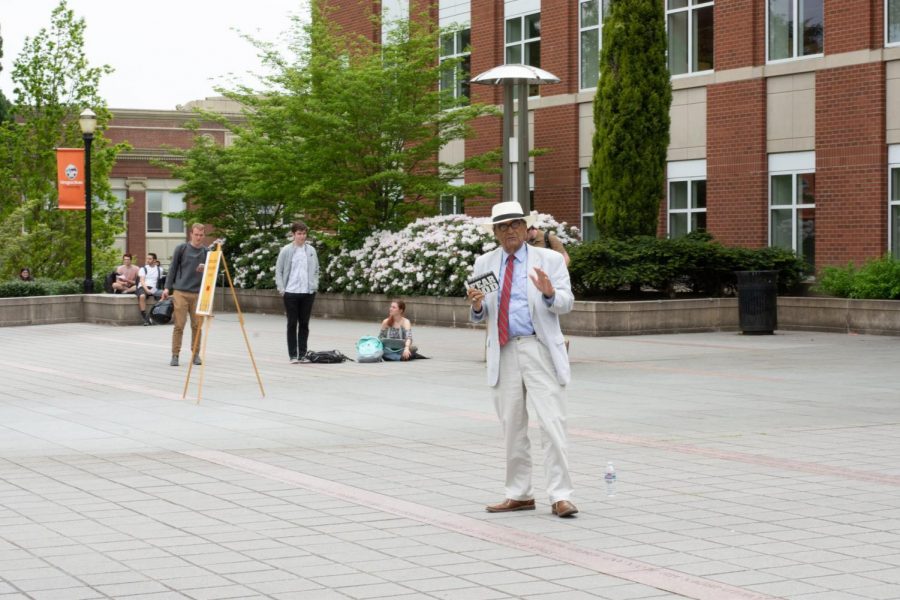 Brother Jed Smock, one of the controversial preaches, evangelizes to the crowd. Divisive rhetoric is protected under the First Amendment and by OSU policy.

Brother Jed Smock and Mikhail Savenko, known for preaching on college campuses nationwide, offered their interpretation of Christianity to crowds of over 50 both Monday and Tuesday in front of The Valley Library. The men stirred debates with students who challenged their controversial and disputed claims, including the falsity of evolution and the belief that dinosaurs went extinct due to homosexuality.

OSU is bound by the free speech protections enshrined in both the Oregon Constitution and the First Amendment to the U.S. Constitution, according to Dan Larson, the interim vice provost for student life. In general, students’ and community members’ rights to express their opinions, even on controversial issues or in ways considered offensive by others, cannot be denied by the university.

This kind of public religious speech, complete with firebrand language referencing hell and damnation, has occurred on the OSU campus going back years and even decades, said OSU Vice President for University Relations and Marketing Steve Clark.

“OSU is a public university and supports our state and nation’s freedom of expression laws and constitutional rights, and the public’s right to observe these rules,” Clark said.

The university administration has published a document which defines its policies regarding free speech entitled “Time, Place and Manner Rules for Free Speech Activities.”

While the Valley Library is listed as a ‘public area’ by description, another clause in the document states the following: “No speech activities shall impede pedestrian and vehicular traffic nor unreasonably disrupt regular or authorized activities in classrooms, offices, laboratories and other University facilities or grounds.”

“Library staff also inform library users — who may not feel comfortable — as how to arrive at the library without engaging with or walking near preachers,” Clark said via email.

As numerous students engaged with the preachers by asking questions and making counter-arguments, some student organizations aimed to relieve the tension. One such group was the Advocates for Freethought and Skepticism, which made ‘preacher bingo’ cards available to students, turning the divisive statements into a lighthearted game.

Shreyans Khunteta, a fourth-year studying computer science, serves as the club’s president, and views the bingo game as a method of defusing potentially negative situations. These cards act as a method to turn the preachers’ actions back onto them, and empower students to lighten the situation, Khunteta said.

“People are marking off bingo cards and having a good time laughing at the preachers rather than the situation escalating out of hand or hurting the mental health of many students, who regularly have to deal with homophobic or sexist rhetoric in their day-to-day lives,” Khunteta said via email.

The game originated within the club in 2014 and has continued to thrive under the watch of three different club presidents, Khunteta explained. They have also received overwhelmingly positive feedback from students.

“So many people tell us how fun the street preacher bingo is and how it’s one of a treasured memory from Oregon State, and I’ve been proud to have been a part of keeping it going,” Khunteta said via email.

Monitoring the proceedings was Officer Michael Mitchell from the OSU Department of Public Safety, who explained he is there to protect both the students and the preachers from any sort of violence, though he has not personally witnessed any violence when evangelists have come to campus.

“If it is something you do not believe, do not give him that power,” Mitchell said.

Tristen Koronye, a second-year pre-veterinary student, heard one of the preachers was making arguments he felt were ‘outlandish’ and wanted to make sure he had a complete understanding of the speaker’s views. While raised a Christian, Koronye now considers himself an atheist, and asked the preachers about the possibility of free will under their ideology.

“I do not agree with what he is saying and I do not think it has a basis in reality,” Koronye said. “He is not representative of Christianity for the most part.”

For first-year kinesiology student Gabriella Gonzales, a self-described Christian, it was important for her to know the preachers’ reasoning and see if they had any credibility.

“He uses multiple fallacies and uses examples that were not applicable to my questions,” Gonzales said.

To Gonzales, being a Christian means loving all people and trying to make the world a better place. In her view, the two preachers do not model these characteristics.

“He is misguided in how he is going about his message,” Gonzales said. “I believe him not being able to accept criticism is bad for the Christian faith.”

Clark and the OSU administration are aware that some members of the OSU community do not favor the preachers’ activities on campus.

“Most members of the OSU community feel benefitted by the university prioritizing and transparently promoting our freedom of expression principles and time, place and manner rules,” Clark said in an email.

Avalon Kelly contributed to this story.