The Daily Barometer • May 7, 2018 • https://dailybaro.orangemedianetwork.com/6686/arts-and-entertainment/explained-the-symbolism-behind-glovers-this-is-america-video/

Explained: The symbolism behind Glover’s ‘This is America’ video 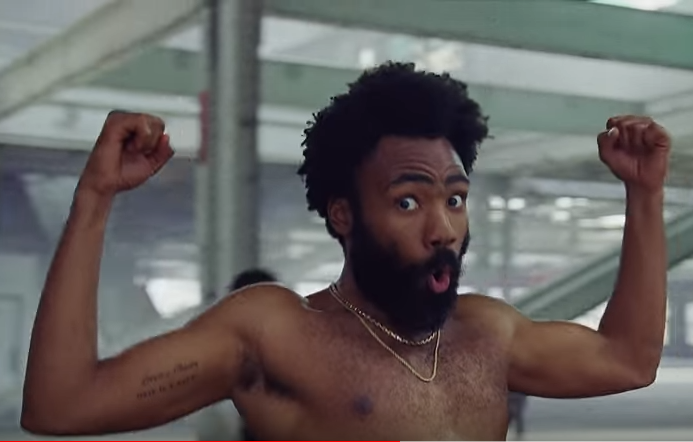 Filled with cultural dances, historical and contemporary references of racial strife and the uncensored depictions of gun violence, Donald Glover’s new music video for his song “This is America” leaves a lot to unpack.

Setting the scene in a warehouse, a guitar placed on a chair gets picked up and played while Glover, also known by his rapper alias Childish Gambino, looms in the background hidden behind a pillar. With expressive facial expressions, and his body movements reminiscent of minstrel acts that mocked people of African descent, Glover slowly drew a firearm to kill a man — execution style — with a bag over his face. That man was Calvin the Second, a music artist.

Cats out of the bag! Catch me in @childishgambino’s music video for his song “This Is America” (it’s a bit graphic, so don’t necessarily let your kids see it though 😬) Got the call from one of my agents while up at Coachella that they wanted me for the shoot on Sunday, drove down and got to be a part of history. 🙏🏾🙏🏾🙏🏾🙏🏾🙏🏾 #ThisIsAmerica #Childish Gambino #DonaldGlover #Atlanta #Music #Musicvideo #guns #gun

Users on Twitter pointed out that Glover’s movements and expressions right before shooting Calvin the Second closely resembled a Jim Crow era minstrel cartoon. It was then punctuated by saying the first lyric and title of the song, “This is America.”

He is playing the role of the Jim Crow Minstrel, referencing rap artists of today. Look at how he stands when he shoots the guitarist, the crazy eyes, untrustworthy smile, down to the yellow shoes on his feet. GENIUS.#ThisIsAmerica #ChildishGambino pic.twitter.com/hAOrZ8lbWN

One Twitter user pointed out that the pants Glover wears in the video is similar to the pants worn by Confederate soldiers.

From there, Gambino echoes his movements and facial expressions as the raw vocals carrying the track turns to a trap-style arrangement. Background dancers appear and break into more modern and viral dance moves. But in the background, chaos ensues.

People scavenge through old cars while smashing them with blunt weapons. It’s possible people can miss this detail in the first viewing as Glover’s dancing commands attention as he is in the foreground, almost acting as if shooting a man had no impact on him. Perhaps this was the entire intention.

The next big scene has a 10-person black choir that goes back to the raw vocals heard in the beginning. It sets an uncomfortably cheery tone when viewers barely got past a sudden shooting. Then Glover makes his entrance blending together a sideways moonwalk and the minstrel movements seen earlier, until Glover is given what appears to be a variety of an AK-74u assault rifle, and shoots the black choir. Twitter users connected the imagery to the 2015 Charleston shooting of a Black church by white supremacist Dylan Roof which left nine people dead and one person injured.

One small detail in the video is how much care is taken to handle the weapons after Glover uses them. Both times Glover hands his weapon to a man running in using a towel to wrap them up, while the victims receive no treatment or attention. And again, chaos ensues as a mob with weapons in hand storm across the background. But the camera remains on Glover, seemingly unchanged.

Glover’s background dancers return to show off more modern dance moves as the trap arrangement returns, almost as if to try and distract from the police lights, smoke, riots and a man jumping to his death behind them. The dancers may be too focused on executing the latest smooth moves.

Then a pale horse with a rider dressed in all black storms past. Users on Twitter drew parallels between the imagery in the video with a biblical reference, where it is a symbol of apocalypse and death. Others say it may be the white horse referenced in the bible, a symbol of conquest, while another user said it represented the book “Behold a Pale Horse” written by Bill Cooper, former U.S. Naval Intelligence, that described conspiracies within the government to coerce the civilian population.

White horse was conquest in the Bible. Not to be confused with the Pale Horse. The rider of the white horse was named Pestilence. In the context of #ThisIsAmerica, it makes sense.

As Glover continues to dance, he suddenly freezes in a position as if he were shooting a gun, then moves on to dance on top of old cars dated back to the 1980’s and 1990’s. This could be a reference to Michael Jackson’s banned scene from his music video for “Black or White.”

As the screen shrinks and moves off the screen, it transitions to darkness where we see a silhouette of a man running away, and alone, in a corridor — and it’s revealed to be Glover. This time his happy facial expressions and dance moves are replaced with a look of fear. The first shot in an entire video surrounded by negative imagery, Glover experiences a negative emotion. Those on twitter say that it evokes sentiments seen in the film “Get Out” and the sunken place, a mental prison for black people where the true soul of the body is detached from its actions.

Despite if the references are true, the video emphasizes how the black community in the United States have been hurt in American society. Graphic incidents such as the Charleston shooting by Dylan Roof, the death of Eric Garner and Philando Castile on camera and the musical outlets of black culture are all juxtaposed together, and then hidden by Glover’s character. He distracts from the symbolism and greater meaning with his happy-go-lucky expressions that are within the lines dictated by a predominantly white society. Or maybe that’s what he is going for.

Nonetheless, Glover’s video is a masterful and timeless depiction of the tragedy seen in the news time and time again.