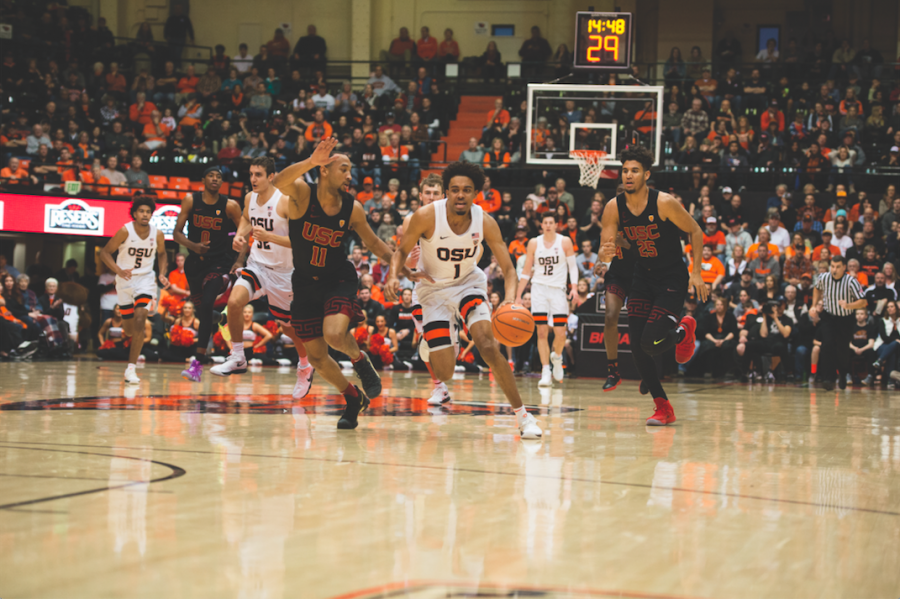 No. 13 Oregon State University’s women’s basketball made it to the Elite Eight in the women’s NCAA Tournament for the second time in school history, finishing the season with a 26-8 record.

After upsetting No. 2 seed Baylor 72-67, OSU’s season came to an end with a 76-43 loss against University of Louisville in Lexington, Ky.

Pivec averaged 7.1 rebounds per game and led OSU in assists averaging 5 per game. She was awarded with the College Sports Information Directors of America Academic All-District First Team honors and

In the Pac-12 Tournament quarterfinals, OSU fell to the University of Southern California Trojans 61-48, ending its season with an overall record of 16-16 on March 8.

The Beavers beat the University of Washington Huskies in overtime 69-66 in the first round of the tournament.

In head coach Wayne Tinkle’s fourth year in Corvallis, OSU struggled outside of Corvallis with a 1-9 record away, compared to their 13-4 record at home.

Redshirt sophomore forward Tres Tinkle was named First Team All-Pac 12 being the only Pac-12 player to scored double digits in every game this season. Since 1979, OSU players have received this recognition a total of 38 times.

Tinkle was also named the Pac-12 Men’s Basketball Player of the Week this season for the second time, the first being in 2016. He led the team averaging 17.6 ppg and 7.2 rebounds per game.

Eubanks was also a lead scorer for the Beavers averaging 13.2 ppg and 6.8 rpg. He announced March 30 he is declaring for the 2018 NBA Draft.

No. 14 OSU will travel to Raleigh, North Carolina for the NCAA Regional Championships for the 44th straight year with a 196.780 qualifying score.

The OSU gymnastics team ended its season 6-3 and received first place in session 1 of the Pac-12 Championships with a 196.575 and placed fifth overall.

For the sixth straight meet, OSU surpassed 49 points for each event at the Pac-12 Championships.

Sophomore Destinee Davis led OSU in vault with a 9.85 and in the balance beam with a 9.875 at the Pac-12 Championships with a 9.85. Senior Dani Dessaints scored a 9.90 in the uneven bars. Davis and sophomore Isis Lowery both scored a 9.850 on floor.

Freshman Kaitlyn Yanish was named Regular Season All-American by the National Association of Collegiate Gymnastics Coaches/Women. She has received six individual titles on the floor exercise and ended the regular season ranked 16th in the nation. Yanish received six scores of 9.90 or higher throughout the 2018 season.

American Athletic, Inc. named Dessaints as one of the 10 AAI Award Finalist, which honors an outstanding senior gymnast. The winner will be announced at the NCAA Women’s Championships banquet in April.

The Raleigh Regional will be held Saturday, April 7 at 1 p.m. and hosted by North Carolina State. The regional championships will be airing on Watch ESPN.

Ending the season 6-6 overall, the OSU wrestling team finished second in the Pac-12 Championships with 70.0 points and seventh overall at the 2018 Division I NCAA Division I Wrestling Championships.

Dhesi earned third on the podium at the Division I Championships, making him the highest placing OSU wrestler since 1998. The two-time All-American fell to Duke University redshirt senior Jacob Kasper to place in the tournament for the second time in his collegiate career with a fifth place finish in 2016.

Dhesi was also awarded with the Pac-12 Wrestling Championships most Outstanding Wrestler for the second time in his collegiate career.

Bresser earned his first ever podium finish with 7th place, ending the season with a 25-6 record.

Freshman Hunter Willits placed second at the Pac-12 Wrestling Championships, where he earned himself a spot in the NCAA Championships.

Redshirt junior Corey Giego earned a Pac-12 Title for the second year in a row after and qualified for the Division I Championships for his third time.

Wrapping up the season, OSU swimming took home ninth at the Pac-12 Women’s Swimming and Diving Championships in late February.

Anderson was less than a quarter second from her personal best in the 200 back, which is a 1:58.07. She finished 22nd overall.

Academically, five individuals were named to the Pac-12 All-Academic Team. Senior Noemie Midrez was the only named as a first team honoree with teammates Anderson, junior Megan Lam, sophomore Merrit Allen and senior Emma Osowski being named to the honorable mention selections.

In fall term, the team averaged a 3.30 GPA, which gave them national recognition from the College Swimming and Diving Association of America as one of the top academic programs.