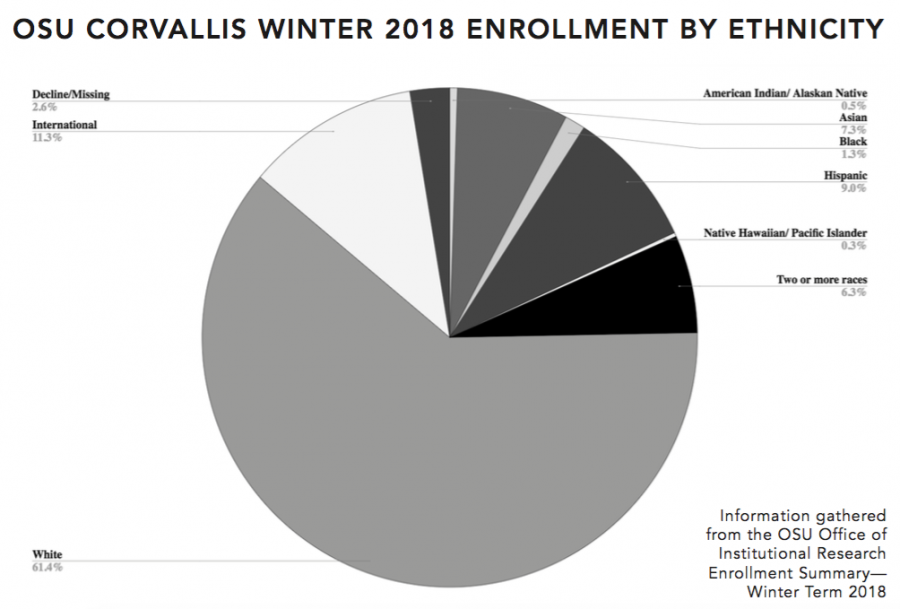 Individuals encouraged to learn about communities outside their own.

24.7 percent of Oregon State University’s Corvallis campus population are U.S. minorities, according to the OSU enrollment census of winter term 2018. In an average class size of 200 students, approximately less than 50 would be students of a U.S. minority.

“To not see someone that looks like you, that identifies as you, is a challenge,” Harris said. “Even in your classes, you might be one of two, or the only one. So that is a challenge that you have to face, like even talking and getting advice from somebody.”

Harris experienced being a student of color on a predominantly white campus and dealt with the challenge of feeling out of place on a campus that was not built with him in mind.

“When you’re on a predominantly white campus, if you’re the majority population, there is no place that you feel like you can’t go,” Harris said. “When you’re the opposite, you just can’t go into some spaces. We do it, because we have business to attend to, but in the back of your mind you think, ‘I don’t think anyone is really in favor of me being here right now, but I can’t let that stop me.’”

One of the main issues talked about by students of color today are the preconceived ideas about race, Harris said.

“Some people are just ignorant, to say things about a group of people that you, one, haven’t tried to learn about, and two, have only been told about by someone who has had an experience that they’re trying to put onto your life,” Harris said.

“When people are not fully aware of your race or culture, they make assumptions or associate you with a certain stereotype,” Tran said in an email. “They don’t really know how to separate the person from what they think they know about the person’s identity.”

According to the Cultural Resource Centers’ website, the BCC, alongside the other cultural centers, was created as a space for students of color to meet and interact with other students of similar cultural backgrounds. They also operate as learning environments for students to experience and learn about communities and individuals with different identities than their own.

“I’ve attended some APASU meetings and events hosted by some of the different Asian student organizations,” Tran said in an email.

“Other than Asian student events, I try to keep up with other cultural events as well to broaden my horizons and open myself up to new experiences.”

Sandy Neubaum, the director of student engagement in the College of Business, holds alecturewithfirst-yearbusinessstudentseach year about ethics and racial relations as they pertain to business.

“I do this lecture every year, and it’s hard. You have to work really really hard, so it’s really really safe for everyone to speak, or to listen, or to turn to their neighbor and ask what’s going on,” Neubaum said. “And then of course I have to have a conversation about why we don’t ask one black person to speak for their entire race.”

Throughout her years at OSU, Neubaum has always considered conversations about race between students of color and white students to be a necessity, rather than an option.

Isai Garcia, a senior studying marketing and management, has experience with conversations around race at the university.

“I have attended workshops that touch on race and other social justice issues,” Garcia said in an email. “There are several workshops and trainings offered through a variety of campus partners that allow us to feel safe and more connected to the university.”

Neubaum believes that more professors and faculty at OSU need to have conversations about race and how it impacts the world around them.

“This is on us. To have the conversations, to work as hard as we possibly can, to create the atmosphere that our students need to thrive— every last one of them,” Neubaum said. “And IdonotgettohandthisofftomyBlackor Hispanic or Asian colleagues because I am a white woman—this is on all of us.”

According to Neubaum, it’s not fair to expect one side of the conversation to carry the burden of understanding. All people need to work to understand each other on both sides to create change, Neubaum said.

“We should recognize this impacts all of us; we’re only as good as all of us together. I would no more think that my peers of color should have to carry this burden and that I don’t have to.”