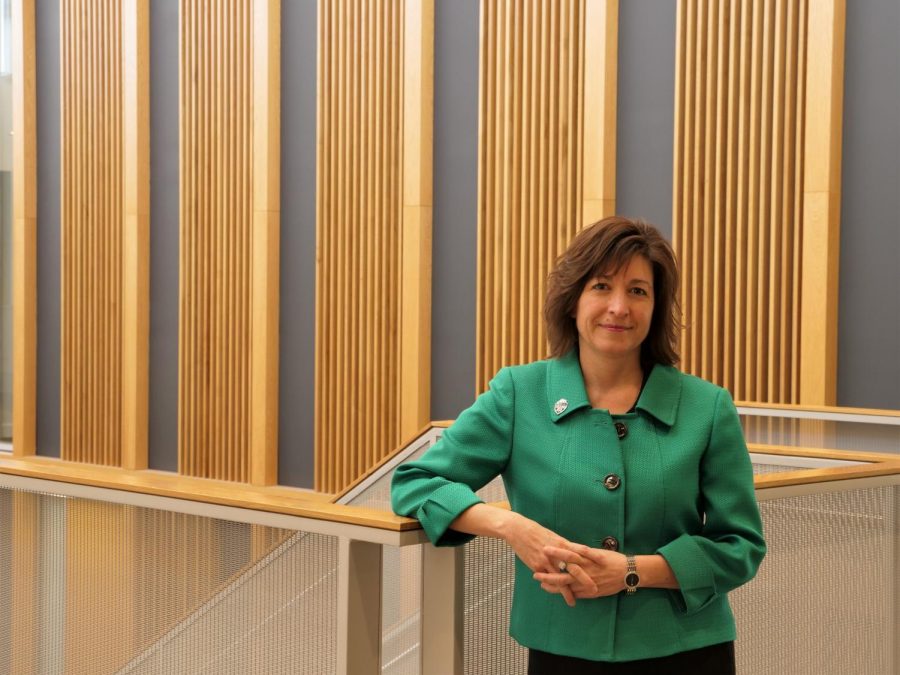 College of Business dean Mitzi Montoya has been in her position since August of 2015.

For the past 11 years, professional school has been a constant for Oregon State University business students. Their progression from second to third year was marked with the accomplishment of acceptance to this upper-division program.

Beginning this term, however, business students will no longer be required to complete this process because the college faculty and staff have elected to remove their professional school entirely, effective spring term of 2018.

“This was a unanimous vote,” Dr. Mitzi Montoya, dean of the College of Business, said. “The proposal originated from the faculty and had full support of the undergraduate program curriculum committee as well as the faculty.  I think the faculty were supportive because there was no change in our standards.  Eliminating preschool did not lower our standards in any way.”

The process of disposing of the professional school model began about a year and a half ago, and ultimately culminated earlier this academic year when the proposal passed the staff vote. At these meetings, the college’s advisers acted as the representatives of the student voice, said Prem Mathew, associate dean of Undergraduate Student Development in the College of Business.

“They’re involved in our undergraduate program curriculum committee as well,” Mathew said. “I think a lot of what we hear from students comes right through the advisers, but there weren’t any students who were particularly in the discussions.”

Montoya said professional school may have been seen as a barrier for incoming students in the College of Business.

“The perception of another hurdle could have been seen as negative for some students,” Montoya said. “It created the perception of, ‘I might not get into my major,’ even if a student was progressing just fine.  We had some student choosing not to come study business at OSU because they were worried they wouldn’t make it past that secondary hurdle.”

One business student, Lily Beck, a second-year marketing and management major, described the prospect of applying for professional school as a narrow hoop students needed to jump through. The process seemed inconvenient and she had mixed feelings about it, Beck said.

“I didn’t mind the fact that I had to meet the standards, but due to one mistake that I made in planning out my classes I would’ve missed the requirements by one class,” Beck said via email. “I was worried I wouldn’t get into pro school without completing this one class. My GPA was high enough, I had enough credits and I was very involved, but I was just worried that because I didn’t fulfill this one requirement that I wasn’t going to be able to be accepted to professional school and I was going to be behind significantly. It was stressful to me to have to troubleshoot how it was going to make up this singular class to not set myself behind a whole term.”

Beck said she was surprised by the College of Business’ decision to eliminate the professional school but she felt it was the right decision.

“I think that it will add convenience to students lives as one last thing they need to worry about,” Beck said via email. “And I’m curious to see how it’ll affect future and current students.”

On the other hand, Daisy Tran, a second-year accounting major, described her experience of preparing to apply to professional school as rigorous but important to her development and beneficial to her experience in the college.

“Pro-school was like a next level that all us business students had to reach to commit to the careers we want to work in after graduation,” Tran said via email. “Knowing how important pro-school was, it pushed me to work more and harder to be successful enough to apply. Also, to be sure that the career that I want to pursue is the right fit for me.”

To Tran, the College of Business’ decision to eliminate the professional school was both surprising and confusing. Despite this, she said she plans on continuing to work just as hard towards her degree and future career.

The students in the business college are currently in the midst of the transition from the preschool model. This process does not occur overnight, and though the change has been approved, many factors are still in the conversion process, Montoya said.

“We have to help students understand what it means; those already here and those that are planning to come next Fall,” Montoya said. “We have to change all of our communications about our programs as well as the advising systems. We have to change what’s actually in Canvas, and make sure all prerequisites are accounted for. So a lot has to change when you do this. It’s a process to undo, but still worth the effort.”

Elsewhere at OSU, other colleges are beginning to look into starting this transition process as well.

Recently, the College of Engineering administration has began to discuss the removal of their professional school.

Dr. Scott Ashford, dean of the College of Engineering, entered OSU as a civil engineer during the first year of the engineering professional school in 1981.

“We’re making some curricular changes at the same time,” Ashford said. “So my goal would be that we will have done a lot of leg work this year and then we start really seeing what it looks like and getting the approvals next year.”

A significant portion of the reason these changes are beginning to occur within the university, Ashford said, is thanks to the new budget model OSU has implemented this year.

“As a land-grant university, part of our mission is, right, educating our students from the state,” Ashford said. “What that allows us to do then is to really properly fund our upper-division courses and it allows us to really change how we operate really for student success.”

Specifically, Ashford said that with the new financial model the tuition paid by students flows more directly into the programs they take part in. Instead of the larger university administration increasing or decreasing the funding a department gets as they see fit, the number of students in the department now plays a more direct role.

According to Montoya, this change is aligned with OSU’s access mission which revolves around its position as a land-grant university and its duty to provide qualified students with access to a high-quality and affordable education.

“If you take that philosophy and you roll it forward, it says that if you’re qualified and you’re meeting standards then you should be allowed to continue with your degree which says that you don’t need a secondary hurdle like Pro School,” Montoya said.

For the first time in 11 years, students in the College of Business will no longer need to complete an application process between their second and third year. All students, whether current or incoming, have been transitioned into their major of choice regardless of class standing, and College of Engineering students may find themselves in the same position within the next few years.

“It’s a long process,” Ashford said. “And it’s something that we need to get a lot of input on because it’s a big change and we want to make sure we do it right. But I think the time is right to do it.”