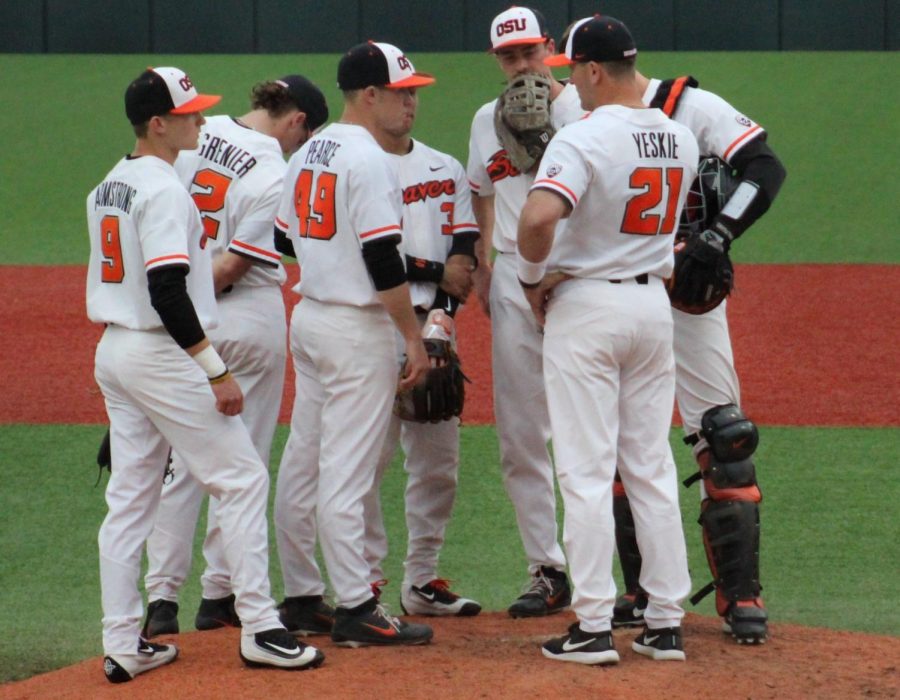 OSU huddles on the mound during the game on Friday, April 20 against UO

The Oregon State University Beavers swept the University of Oregon Ducks in the three-game series this weekend at home Saturday marking the Beavers’ seventh straight victory over the Ducks.

Goss Stadium at Coleman field was filled to the brim each game, with over 11,000 fans coming to watch the Beavers play over the course of the series.

Junior infielder, Nick Madrigal, made his return to Goss after a nearly two-month recovery from a broken left wrist.

Madrigal, the 2017 Pac-12 player of the year, stepped back on the field in game one against the Ducks and went 2-4, racking up one run batted in.

“As soon as I stepped on the field, and then hearing the fans giving me a little ovation, it really means a lot for them to do something like that,” Madrigal said.

Beavers head coach Pat Casey was excited to see Madrigal come back after his time off.

“We knew he’d give us a lift. He’s a special baseball player,” Casey said. “Most guys like me would have to have a few at bats before I felt like I was comfortable. He jumped in there and jumped right back after it.”

Sophomore infielder Tyler Malone was red-hot during the series, notching in a homerun for the Beavers each game. This marks his fifth straight game with a homerun.

“I really started just going back to what used to work for me before I got here,” Malone said after the series finale. “I’ve just really dedicated myself to that and stuck with that and it’s been paying off.”

After Malone’s homerun in the finale, the rest of the team celebrated by leaving him with an empty dugout and running into the alleyway behind it.

“I just round third, tapped my helmet, and then looked and was like ‘Oh my gosh’. That was funny,” Malone said in regards to the stunt.

But it wasn’t just Malone that put on a great performance for Goss Stadium.

Senior pitcher Luke Heimlich was unstoppable in game number one of the series. He went 9-1, and showed no mercy during Thursday’s game, racking up 12 strikeouts in 7 ⅓ innings.

The strike throwing senior threw off the Ducks, and gave the beavers a defensive advantage.

“Everytime I take the field against a team it’s a new team. I’m a different pitcher than I was last year. Each game this year is new. I have to take a different approach into it and not really compare it to last year,” Heimlich said.

Junior pitcher Bryce Fehmel also put on a full display of athletic ability in game two going 5-1, and retiring 12 straight batters at one point in the game.