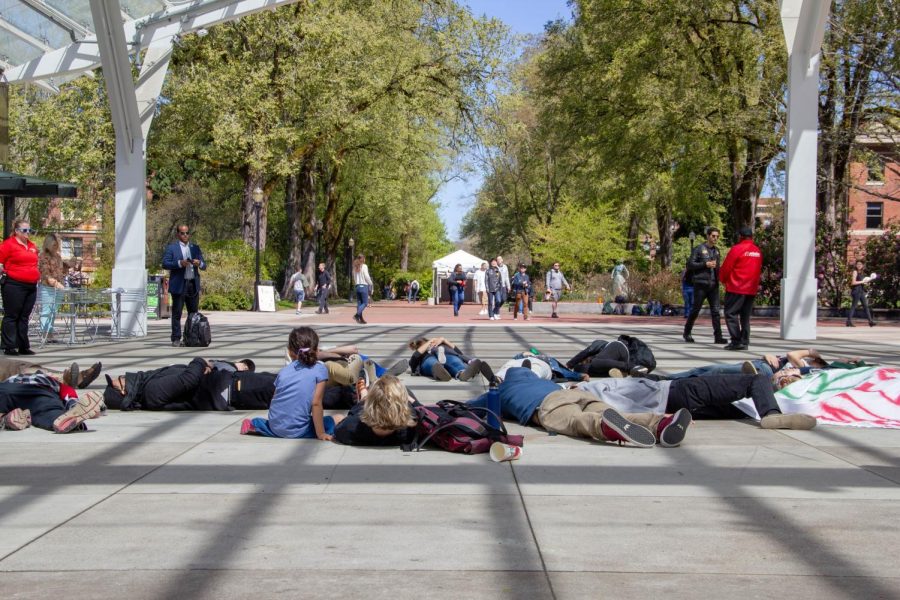 Students United for Palestinian Equal Rights - OSU staged a die-in protest during the Israel Block Party in the SEC plaza this afternoon. The group had a banner that said, "Free Palestine."

Celebrating Israel’s 70th anniversary as a modern state, the Oregon Hillel Foundation’s Israel Block Party was met by student protesters who staged a “die-in,” where activists laid motionless on the ground as a form of protest. The activists had banners that called to, “Free Palestine.”

The Israeli-Palestinian conflict, occurring most notably along the Gaza Strip, often sees violent clashes revolving around whether Israel or Palestine possesses the right to the land.

Andy Gitelson, executive director of the Oregon Hillel Foundation, believes in the importance of free speech and informing oneself on both sides of the story.

“The number of people we had today that asked really challenging questions about current events in Gaza, was a really great segway,” Gitelson said. “And we encourage them to read sources on all sides of the issue. We didn’t say Israel’s totally right, in Gaza, because that would be incorrect. And that wouldn’t be right. And we weren’t there to do that. But what it did enable us to do was to have a deeper discussion and talk about why it was that we were there, why it is that we are important, and to celebrate that.”

According to Gitelson, hosting the Israel Block party was about opening dialogues surrounding what it means to be Jewish, what Israel means to his group and the Israeli-Palestinian conflict. The Oregon Hillel Foundation decided to go ahead with the Israel Block Party in spite of recent events in order to keep putting themselves in a position for discussions and learning. Gitelson says he recognizes that the Israeli-Palestinian conflict stems from an event with a dual narrative. The creation of Israel, a jubilant and fulfilling moment for the Jewish people, is called Al-Nakba by the Palestinian people, translating to “the catastrophe.” Al-Nakba is the exodus of over 700,000 Palestinians.

“People make it out to be harder than it is. There’s this land, Palestine. And they built a new state on that land, Israel. And ever since that date, 70 years ago today, Israel has colonized Palestine, expanding settlements that the United Nations has deemed illegal,” Hussaini said via email.

United Nations General Assembly Resolution 66/225 states the Palestinian people have a right to the natural resources of the Occupied Palestinian Territory, the area which is currently in occupation.

Hussaini also said that he would like to have more important dialogues, but SUPER has had conflicts with Hillel in the past.

“I can’t speak for how they feel about our protests, but my group has attempted to work with Hillel,” Hussaini said via email. “And Hillel’s director told us chapters of Hillel cannot work with any organizations that actively support and defend the rights of Palestinians.”

According to the Hillel International website, “Hillel welcomes, partners with, and aids the efforts of organizations, groups, and speakers from diverse perspectives in support of Israel as a Jewish and democratic state. Hillel will not partner with, house, or host organizations, groups, or speakers that as a matter of policy or practice: Deny the right of Israel to exist as a Jewish and democratic state with secure and recognized borders…”

The Block Party spanned the afternoon, featuring freshly spray-painted custom t-shirts by Artists 4 Israel, information on Birthright Israel, a program for young Jewish people to visit Israel and more. The protest was held, flyers were passed out and difficult dialogues were had.