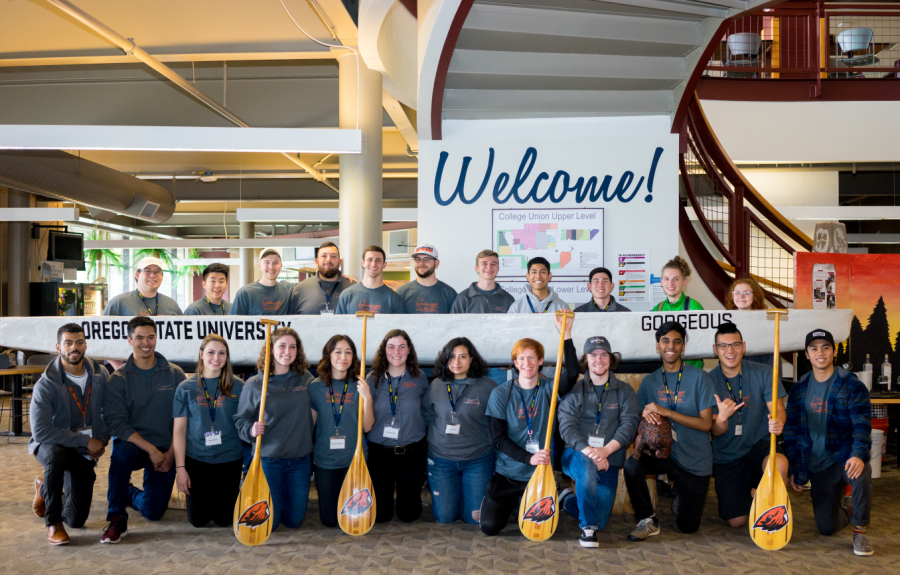 What floats your boat? Hypothetically, light materials like wood, metal or plastic might do the trick. However, a team of students at Oregon State University build boats that are a little bit out of the ordinary.

Students part of the OSU Concrete Canoe Team build canoes using concrete and compete against other schools around the country every year.

The American Society of Civil Engineers, or ASCE, is the host of the concrete canoe competitions. They’re subdivided into 18 regions of the U.S., OSU taking part in the Pacific Northwest regional conference. The winner of that regional conference moves on to compete at the national level.

“Students have been doing this since the 1970s. They were getting together informally to race their canoes and the first national competition was in 1988,” Beth Wiley, the manager of student younger member programs at the ASCE, said.

The competitions have seen larger numbers of schools being added to the roster over the years, making it one of ASCE’s most popular events.

“It’s a very popular competition, the gold standard as far as ASCE is concerned. It’s our flagship competition,” Wiley said.

“Before they can race, they have to put their canoe in a tank of water, have it completely submerged, and then they let it go and it has to float back up to the surface,” Wiley said.

The OSU Concrete Canoe Team has excelled in the regional conference the past few years, placing highly every year.

“The past four years that I’ve been doing it, we’ve gotten second place in our region each year,” Cadell Chand, one of the captains of the team, said.

The events that OSU and other schools compete in are taken into account by the judges and accumulated to create an overall, final score. In the national competition, students from the winning school receive a $5,000 scholarship and a trophy. But to students at OSU, there’s more to building concrete canoes than just winning.

“It’s a chance for students to network. We’re a big family and it’s a lot of fun,” Chand said. “It’s about trying out all the different areas of civil engineering.”

Building a well-functioning concrete canoe requires students that are not just studying civil engineering, but students from other majors that can contribute their skills to the process.

“We actually have quite a few mechanical engineers and as we get further into fluid dynamic analysis and structural analysis, we’re needing more CS (Computer Science) majors. So really, anyone can join the team,” Chand said.

Just like any boat, OSU’s concrete canoes must be built with materials that give the canoe integrity.

“The straight basis is concrete. We just have a less dense mixture than water. We also add foam to the bulkheads so that helps with the floatation as well as the decrease in density,” Julian Angulo, the construction lead on

According to Angulo, each team that’s participating in the competition must make a new canoe each year they compete. The rules, however, change.

“The basis (of the rules) stays the same for the most part. They change a few things on a yearly basis, but the major changes will come once every four years, I believe,” Angulo said.

The team spends a great portion of their school year working on the canoes in their workshop, prepping the canoe for

“From the beginning to the end, it probably takes us a term to do our practice canoe,” Angulo said. “From there, placing the final canoe now that the structures compete, probably a month or two.”

While time may be a factor for building canoes, OSU students make it a rewarding experience  by displaying their latest canoes in Owen Hall for others to see.

Students can get involved with the team by visiting the OSU Concrete Canoe Team’s website, or attending one of the general meetings (times posted on the website).