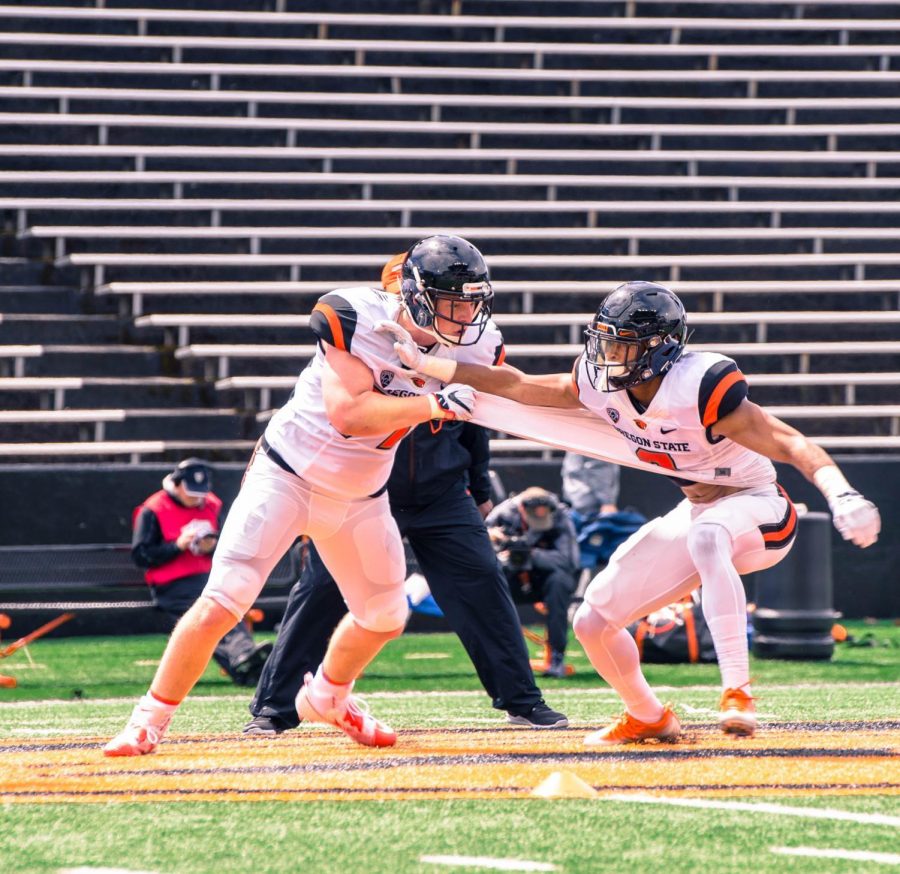 Oregon State University football hosted its annual spring game this Saturday as a chance for fans and the world to see the players work on drills and scrimmage.

A few new faces stepped on the field, one of them being sophomore quarterback Conor Blount. Blount showed skill on the field throwing three of the five touchdowns for his team.

New head coach Jonathan Smith will soon be forced to decide who will be the starting quarterback next season for the Beavers.

Smith was a four-year letterman quarterback from 1998-2001, and took the Beavers to the 1999 Oahu Bowl and the 2001 Fiesta Bowl. He stands to be one of the most successful student athletes that OSU has ever seen.

Smith moved to OSU after a successful season at the University of Washington as the offensive coordinator and quarterbacks coach. In his four years spent with Washington, Smith took the Huskies to the 2016 Pac-12 Championship, ending the season with a No. 4 Associated Press poll ranking.

In his debut on Saturday, Smith seemed happy about the Spring game performance and optimistic about the team’s upcoming season.

“We’re going to give these guys a week or two to regroup. Spring ball was a month and we went pretty hard,” Smith said. “And then we have to have the best summer of our lives. We gotta get in great shape, hit the weight room, get stronger and faster.”

The three quarterbacks that battled it out on Saturday were Blount, senior Jake Luton and transfer Jack Colletto. Blount seeming to have the best grasp on the style that Smith has been rolling with.

One of the passes Blount threw was to sophomore wide receiver Timmy Hernandez. It was a 5-yard slant route that led to a touchdown.

“Me and Conor were talking about it earlier, before the game started,” Hernandez said. “We really didn’t have a lot of chances this spring to throw a deep ball just because of the way the plays worked out.”

Blount threw impressive passes to Hernandez throughout the game.

“Timmy is probably the smartest football player on out offense,” Blount said. “He’s really football savvy, a great route runner, and a guy who you can always rely on with his hands.

Despite the 1-11 record last season, there’s a sense of optimism in the air on Saturday as Smith leads the team into a fresh new season.