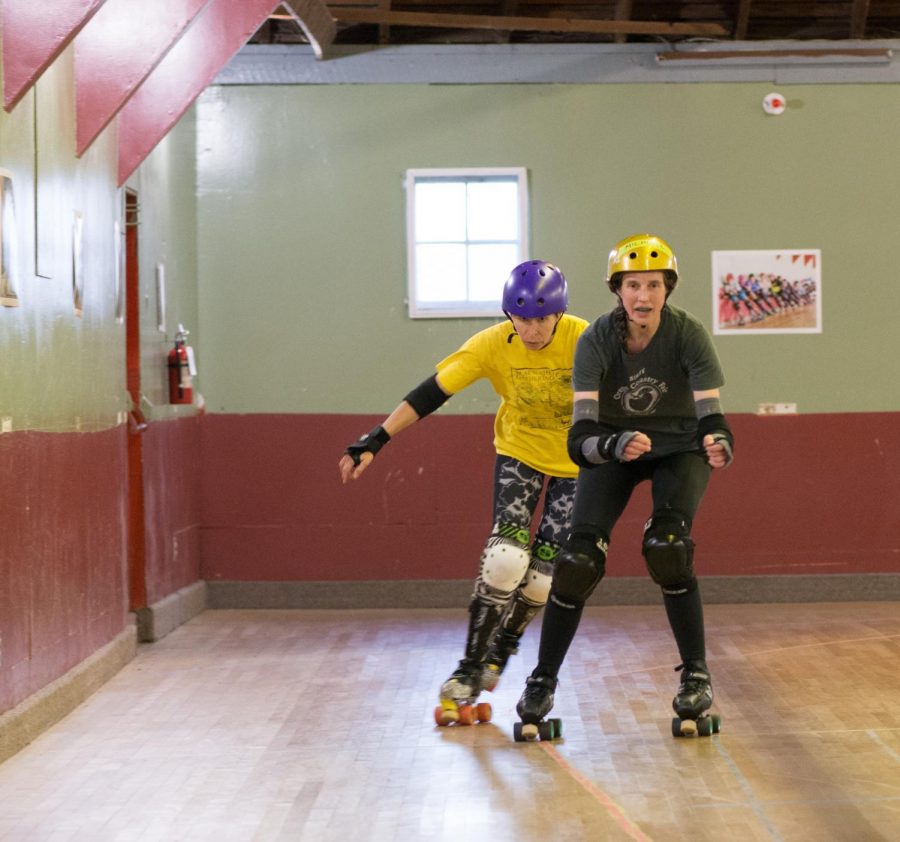 Skating can prove to be difficult in and of itself. The sport of roller derby, however, adds teamwork and coordination to the rink, creating a challenging and rewarding experience.

Sick Town Derby Dames, the local league in the area, is located just six miles north of Corvallis. Inclusivity and acceptance are important on the rink, according to Abbie Leland “Glitzburgh,” the head of sponsorship and social media for the league. Sick Town offers an opportunity for women who want to learn more about the sport.

Roller derby involves two teams on the track with a set of four blockers and one jammer, who wears a cover on their helmet featuring a star. In total, there are 10 players on the track at any given time. The goal is to get one team’s jammer through the pack, the largest group of blockers, while defending against the opposing team’s jammer.

“Once a jammer has come up to the pack and passed you, wherever they have passed you on your hips, then that is a legal pass. Then they make one more rotation around before they start scoring points. The first pass is called the initial pass, the second one is the scoring pass,” said Leanna Van Slambrook, Sick Town Derby Dames member known as “Van Slam.”

A misconception of roller derby is that the matches, called “bouts,” have a fight component to them, according to Sarah Burch, also known as Candy Flip Her, president of Sick Town Derby Dames.

“People expect to see what has been on TV and represented in movies; there is a misconception that there is a fight component like hockey,” Burch said via email. “Roller derby incorporates a few more rules, with safety a number one priority of the sport. Full safety gear is required, and tripping, elbowing, pushing and hitting in the back or the head will land you in the penalty box. Sportswomanship is valued among the sport and particularly our team.”

Sick Town Derby Dames was formed in 2008. More specifically, the group is a Women’s Flat Track Derby Association-affiliated league. Their matches are played on flat surfaces that ranged

from hardwood floor to pavement, according to Leland.Roller derby came onto the scene in the early 1900s and gained wide popularity again in the early 2000s.

“We are a team composed of a wide variety of personalities and skating abilities,” Burch said via email. “We support and motivate each other and recognize the diversity in skill and experience level. The atmosphere at practice is encouraging and inviting.”

Helping on the outreach team and updating social media, Leland has had the opportunity to meet and talk with all the league members, both old and new. Skaters’ ages range from 18 to women in their sixties and set an example that the sport offers something for everyone.

For the first five years, Sick Town had trouble finding an affordable and permanent practice space until 2013 when the team purchased the historic roller rink, formerly known as Lake Park Roller Rink, said Burch. Being that the building is almost 100 years old, it was declared unsafe. From June 2014 through August 2016, Sick Town volunteers met to repair the roller rink.

“We’re all volunteer based. We fix the repairs on the roof and the floor. We put on bouts to raise money. Everything is volunteer based. Nothing happens unless we actually do it. So we put all this energy and time into something we love so we can skate,” Van Slambrook said. Currently, the league is raising money to fundraise for a new roof.

Sick Town is a 501(c)3 nonprofit organization. This means the league is dependent on community fundraisers, donations, sponsorships and help from volunteers to operate successfully. Through outreach, Sick Town has had many great opportunities to connect with business owners in the Corvallis area and the local community.

Volunteers replaced sagging trusses, repaired the roof and overall increased the safety of the old building to comply with building permits. After two years, the building passed structural, electrical and Fire Marshall and Benton County building inspections, according to Burch. The Sick Town Derby Dames practices and training camps were resumed in April 2016.

“We have been working hard as a league to grow and recover from this construction hiatus, and proudly returned to Linn County Fairgrounds October 2017 for our first local bout in over three years,” Burch said over email.

There is still more work to be done as Sick Town pushes to embrace the rink as a permanent home where they can hold year-round practices for both adult and junior leagues, as well as community-oriented events. According to Burch, a few more repairs and replacements need to be done.

For those interested, the best way to get involved is to come see the boot camps held at the rink and even participate to learn the skills required for the sport.

Boot camp is where skaters learn the basics of roller skating, safety gear, how to skate the track, and the “roller derby stance.” This lasts nearly two months for new skaters, according to Leland. Members can then participate in a Minimum Skills Assessment, commonly known as MINSKIS, to assess their skills. The next level of skill sets is known as “Fresh Meat.” However, some will continue to keep skating for leisure or can move up to the advanced levels. It is at the advanced level where skaters can start competing in scrimmages and bouts, Leland added.

“There are a certain number of scrimmages one must attend to then be bout-eligible,” Leland said via email. “We also have attendance requirements for skaters in Sick Town to make sure skaters keep their skills and endurance up and that they’re safe to skate with fellow teammates.”

The next bout featuring the Sick Town Derby Dames is May 19 at 6 p.m., located at Linn County Fairgrounds in the Santiam Building. The event is family-friendly and will feature music, food and an energetic atmosphere.

“It’s a really good way to challenge yourself and challenge what you’re capable of,” Van Slambrook said. “I’ve played a lot of sports and (roller derby) is absolutely the hardest sport that I’ve ever played. Not only is it hard because you’re learning how to skate and you’re doing other things but just the physical requirements to play the game are pretty rigorous. That being said, I love that part of it.”