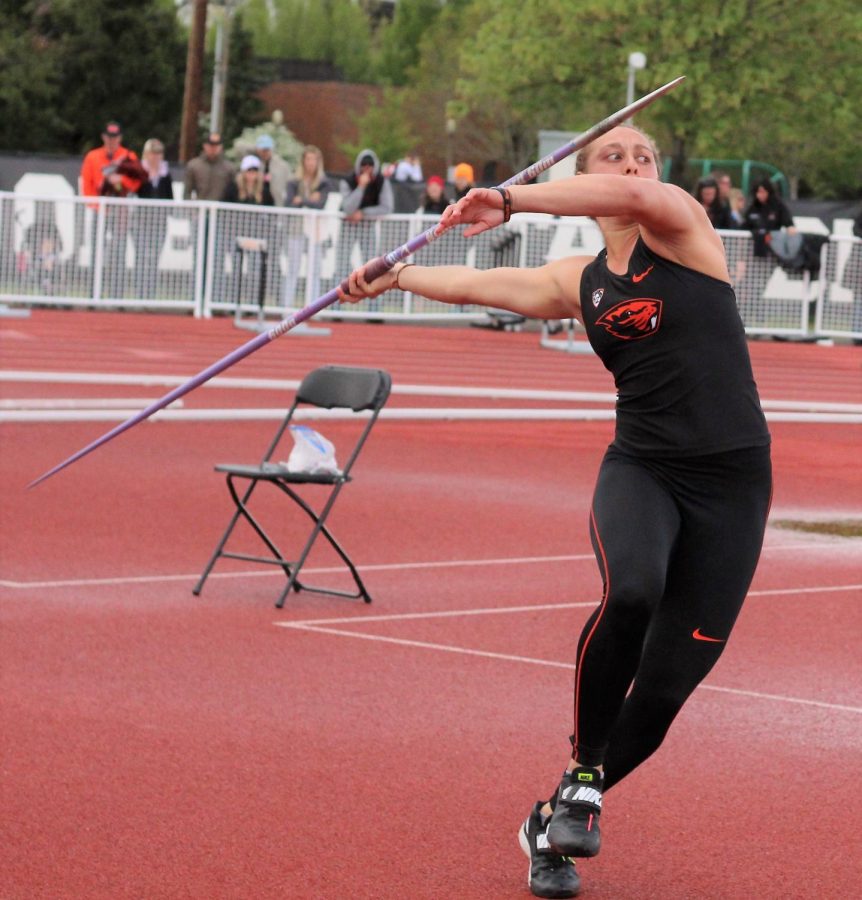 The two-day meet included athletes from schools all around the West Coast, including Idaho, Gonzaga University, Eastern Washington University, University of Washington, and more.

The Beavers had a successful turnout for their only home meet of the season, racking up wins in in the long jump and javelin throw. Sophomore Ann Wingeleth recorded a 19’ 1.25 leap to take first in the long jump, marking the fifth-longest jump in OSU history.

In the Javelin, three Beavers advanced into the finals. Senior Amber Peschka placed sixth with a throw of 146’ 3, a personal record for her. First place went to senior Destiny Dawson, who threw a 163’ 11 to secure back-to-back High Performance javelin wins.

“I wasn’t excited because of the weather, but it turned out better than I expected,” Dawson said. “It wasn’t easy to find my big throw today, but I did.”

Sophomore Lindsay McShane took third in the discus throw with 157’ 07, and placed sixth in the hammer throw with a 172’ 08 toss to add to the throwers impressive overall performance.

David Dumble is the assistant track & field coach for OSU, and works with the throwers on the team.

“I’m really excited about how they’ve competed at home, they were really excited to compete in front of their families and friends,” Dumble said. “As we’re preparing for the Pac 12, we have two weeks to go, and they did really well.”

As for the racing side of track & field, senior Alba Villaronga set the tone in the 100m hurdles by running a 14.37, the seventh fastest time in OSU history and placing third overall in the meet.

In the 800m, junior Nicole Goecke became the second women in OSU history to run below a 2:07 in the event, and took seventh overall in the meet with a time of 2:06.59.

For her last home meet at OSU, senior Kala Kopecek broke 2:10 for the first time in her track & field career with a 2:09.85 in the 800m, placing her at number four in the all-time fastest for the event in OSU history.

“I’m actually coming off of a pretty serious injury, I didn’t think I was going to be able to race this season,” Kopecek said. “It feels great to finish out my senior season strong, just being on this team is such a privilege. I’ve enjoyed my time here, I love this track and I love this program.”

The OSU women’s track & field team will be heading to Eugene on May 4 for the Oregon Twilight meet. The following day will be the start of the Pac-12 Multi Event Championships in Palo Alto, California.