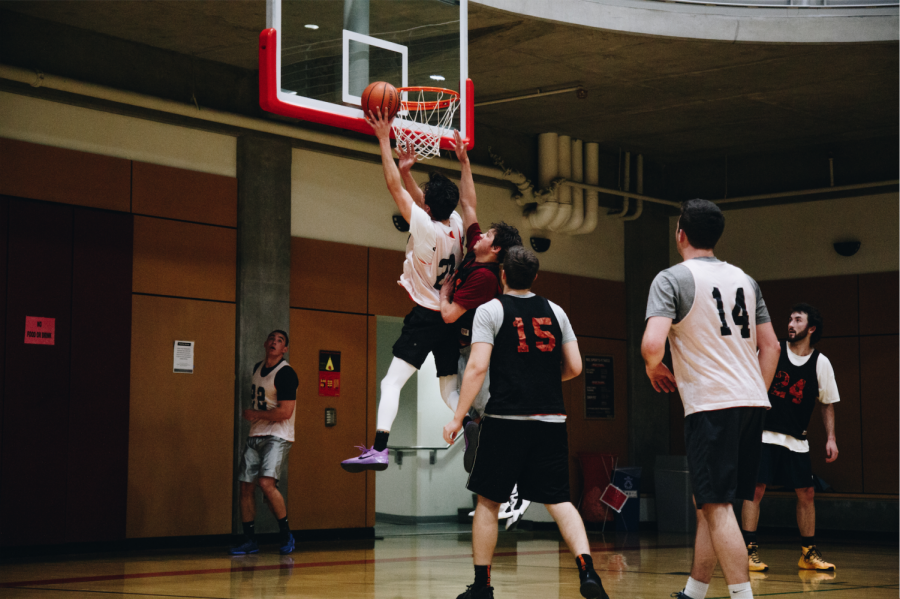 SAE’L Team 6 attempts to score. The ending score was 50-40 after 11 straight points for SAE’L Team 6, putting them in the lead.

With the music bumping and the court set, Oregon State University’s finest basketball players came out to compete for their respective titles.

Every year as winter term comes to a close, so does the intramural basketball season. Teams with a 2-2 record or better advance to the single elimination playoff bracket.

On March 14, Sig Ep A and SAE’L Team 6 took the floor for the Greek championship game to kick off the night.

Both teams came out aggressive in the first half, with the two teams combining for 11 fouls. The teams traded buckets for the majority of the half, as the lead changed eight times. SAE’L Team 6 took a 23-18 lead into halftime.

“I was just out there trying to play like Dame D.O.L.L.A,” Fishback said.

Next up, the women’s championship featured Dam Good Buckets and Double Dribble.

Double Dribble opened up the scoring for the game, building a quick 5-0 lead to start the game. Dam Good Buckets kept the game within reach, going on an 11-3 run to close out the half.

The second half was all Dam Good Buckets. The team utilized pesky defense and hot shooting to pull away. Double Dribble made things interesting in the final minutes, pulling the game to within three points. Dam Good Buckets held off the rally, earning a 42-39 victory.

“I thought we played as a team and shared the ball well,” Chantal Castaneda, player for Dam Good Buckets, said. “Everybody believed in one another and we made it happen.”

The men’s final closed out the night, with Patty Clappers and Shrimp Shaq Shooters competing for the title.

The intensity was there right from the tip-off, as both teams pushed the ball up the court with pace. The teams went basket for basket early, but a few late threes gave Shrimp Shaq Shooters a 31-24 lead at half.

The Patty Clappers could not get themselves back into the game after half. Whenever they made a basket, Shrimp Shaq Shooters would answer with a basket of their own.

The game got as close as four points late in the game, but accurate free-throw shooting and timely defense by Shrimp Shaq Shooters secured the win.

Shrimp Shaq Shooters, who went by the motto “the shrimp shaq experience,” took home the 61-48 victory.

“We definitely competed against a lot of good teams,” Majeed Badizadegan, player for Shrimp Shaq Shooters, said. “I thought we played unshellfish basketball.”