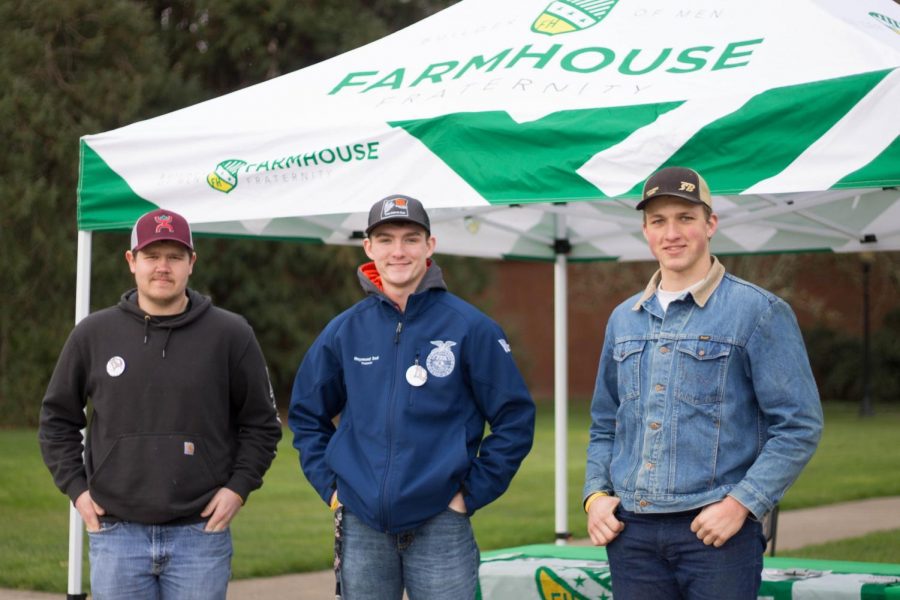 (Left to right) Eston Hughey, Raymond Seal and Seth Barnhart stand in front of the Farmhouse Fraternity tent in the Memorial Union Quad. Farmhouse is returning after 22 years.

FarmHouse relaunches 22 years after shutting down, “Builders of Men” motto.

A casual visit to room 354 of Oregon State University’s Student Experience Center on Thursday nights wouldn’t reveal anything out of the ordinary. A small group of OSU students play cards there at 7 p.m. every week, but these card-loving Beavers have a deeper purpose.

FarmHouse, a professional agriculture-oriented fraternity that became a national organization in 1921, was active at OSU between the mid-1960s through 1996 when, according to Raymond Seal, the new chapter president, it closed due to poor finances and incidents of bad behavior.

Twenty-two years later, FarmHouse is back at OSU thanks to four charter members who believe it can play an important role in the student life of the university’s Agricultural Sciences and Forestry Colleges and related majors. OSU’s agricultural and forestry programs, according to the college’s website, was recently ranked seventh in the world. The agricultural school serves 2,600 students.

Seal, freshman crop and soil science major, said his father and uncle were in FarmHouse in the 1980s. Seal also disclosed that the OSU chapter was officially recognized on Nov. 6, 2017.

This semester the four charter members have been busy organizing their chapter, establishing recruiting strategies and learning about their new fraternity. The new OSU officers recently traveled to FarmHouse’s national office in Kansas City, Mo., for four days of training.

Seal and the other officers want to build a different kind of fraternity.

“We really want to be the gentlemen on campus and not looked upon as a fraternity stereotype,” said Seal. “We want to be a place where we can improve ourselves, socially and morally. Building a strong community as a group of guys who work together with the same goals in mind.”

FarmHouse International Fraternity has 34 chapters in the U.S. and Canada. The fraternity’s motto is “Builders of Men,” according to the organization’s website. FarmHouse is an acronym for “faith, ambition, reverence, morality, honesty, obedience, unity, service and excellence.”

Seth Barnhart, the OSU chapter’s vice president of Finance, said he decided to join because he knew the values and what Farmhouse stood for, as a result of his father’s positive experience in the chapter during his time at OSU.

“There is a huge potential to establish a fraternity that truly stands out from the typical frat stereotype,” said Barnhart. “I want to try and make it a goal to live up to our motto of ‘Builder of Men,’ and not just be a party crowd. Being an ag fraternity, we want to try and establish connections within the ag and forestry industries for future employment and education opportunities. Our ultimate goal is to make our fraternity one of value and not simply a fun time.”

James Spry, membership consultant for FarmHouse International, joined the fraternity at Clemson University. Spry, who recruited Seal as chapter president, said he will be working with the OSU officers to attract new members.

“FarmHouse is a non-secretive fraternity,” Spry said. “So anything anyone wants to know or learn about FarmHouse, they can learn either from talking to a member or by looking it up online. The acronym for FarmHouse are the values we believe every FarmHouse man should have.”

FarmHouse hasn’t been without its controversy. Seal noted that the previous OSU fraternity, like many Greek organizations in the 1990s, suffered because of a few members who developed a bad rap following a few incidents.The chapter couldn’t pay its bills, Seal said, and had to sell its house and close down.

Seal and the other members said there will be no such controversial activity associated with the OSU chapter.

Seal shared he originally didn’t like fraternity and sorority life because of the concepts, but when he learned about FarmHouse’s values and goals he knew that this fraternity was a good opportunity to fill a need at OSU for agriculture and forestry majors.

The fraternity is holding a co-philanthropy event with the Sigma Alpha sorority on Feb. 23, from 7:45 p.m. to 10:45 p.m. in the old field on the west side of campus. The country swing dance will raise money for Be the Match

Of course, there are the card games. Seal said anyone interested in joining the group can come to the SEC on Thursday nights at 7 p.m. to meet fraternity members and join in the card games. For more information, prospective members can email Seal at [email protected]