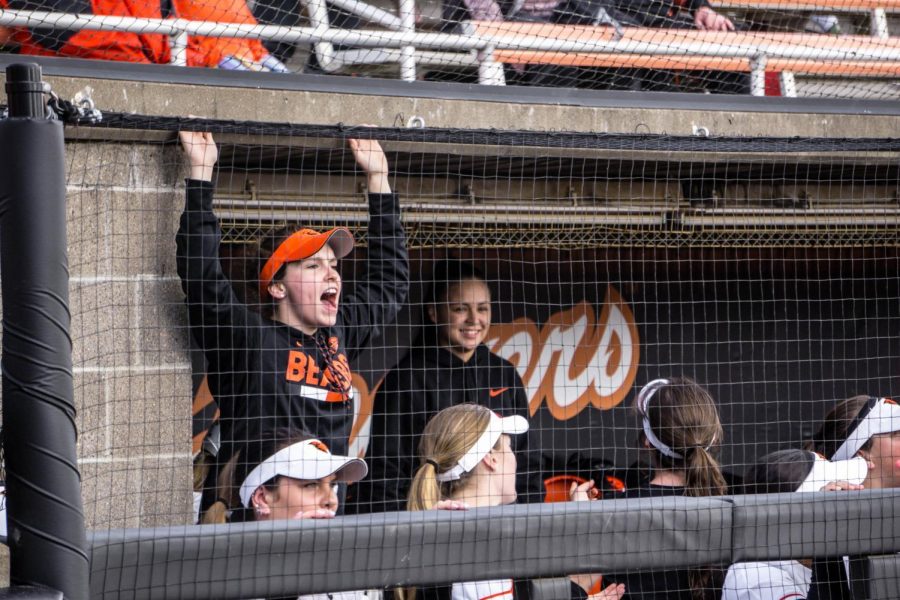 Members of the Beaver softball team watch this weekend's series from the dugout.

Next game on the road against UCLA.

The No. 25 Oregon State University softball team (19-10) swung open their Pac-12 conference with a three-game series win against the No. 16 University of California, Berkley Golden Bears (24-5), this weekend at home in the OSU Softball Complex.

The Beavers won for the eighth time in the last seven games while California lost their five-game win streak.

Friday, OSU scored in every inning, including three runs in the second and sixth frames.

Freshman infielder Hope Brandner belted a three-run home run, her sixth of the year, in the bottom of the sixth to conclude the Beavers’ scoring. Her home run gave the Beavers some breathing room with a five-run advantage.

“We know how we can play and I think we know our potential,” Brandner said. “This game showed what we can do, especially because we were underestimated in the Pac.”

Senior shortstop McKenna Arriola had hits in her first two at-bats. Her two-run, two-out double to center in the second made it 4-1.

“I think that was good for our pitchers, too, knowing that we had their backs, and they can just go out there and throw,” Arriolas said.

OSU came back in the bottom half with senior infielder Alysha Everett’s run-scoring base hit to center, also with two outs. Junior Michelle Sass two-out solo homer in the fifth made it 7-3.

The Golden Bears got back in the game in the sixth with two RBI singles off OSU freshman pitcher Mariah Mazon, who pitched the final three innings.

OSU had 13 hits in all, with two apiece from six different players.

“It’s a big win and gives us confidence for the rest of the weekend,” Laura Berg, OSU head coach, said. “We played a lot of top 25 teams in the preseason and I think that really helped us heading in the Pac-12 schedule.

In their second game of the series that took place on Saturday, the Beavers suffered multiple errors which helped lose the game an inning early

“We didn’t have the same mentality as yesterday,” Coach Berg said. “We just

California took a 3-0 lead in the third on a three-run home run by sophomore pitcher/infielder Bradie Fillmore.

Arriola and Everett each notched a hit in the loss. Mazon struck out five in five innings.

Only seven of the Golden Bears’ 12 runs were earned.

OSU took home a 8-3 win in the final game of the series, winning the series overall.

Arriola had the first run of the game in the first inning, followed by two runs by California in the second inning.

With another run by California in the top of the fourth, OSU tied up the game in the bottom of the fourth with Everett and Brandner scoring off of Brandner’s home run.

With a tied game, Everett, Brandner, Sass and freshman utilities player Missy Nunes all scored in the bottom of the fifth inning with no runs in the sixth or seventh innings, putting OSU up by five.

The next game is on the road against University of California Los Angeles on Saturday, March 24, at 6 p.m. The next home game is against the University of Oregon at home Thursday, March 29, at 4 p.m., which will be aired on Pac-12 Networks.