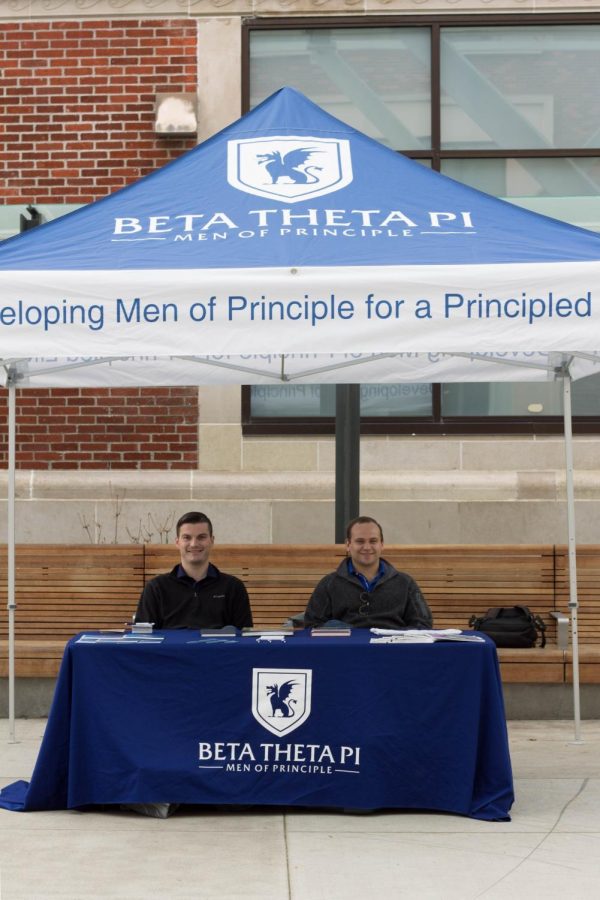 Beta Theta Pi has been recruiting new members for its expansion to the Oregon State University community since its closure in the late ‘90s.

Beta Theta Pi’s plan to return to fraternity and sorority life as an expansion with the help of new members and funding could later create a home for Beta members in OSU’s community.

Joshua Fuentes, Beta Theta Pi colony development coordinator, assists Beta in getting funding from alumni and other organizations and works with men of the chapter and advisory team to help them lay a solid foundation for when they are operating by themselves.

“We want to work closely with the university administration, primarily with the CFSL, in order to be sure we are following their rules and guidelines,” Fuentes said. “That way we are setting our men up for success while also showing them how to operate correctly as a fraternity.”

According to the Beta Theta Pi Fraternity website, the fraternity has five core values that all members are expected to uphold; they are mutual assistance, intellectual growth, trust, responsible conduct and integrity. Additionally, the fraternity’s mission is to develop men of principle for a principled life. Since the start of Beta’s award-winning Men of Principle initiative in 1998, they have seen significant improvements in the areas of academics, recruitment, risk management and leadership development.

According to OSU’s Center for Fraternity and Sorority Life webpage, there are 53 different chapters on campus. Students looking to be a part of Beta Theta Pi must have a minimum GPA of 3.0 in order to participate in recruitment.

OSU previously had the chapter open until 1998 when they had to close down for financial and cultural reasons. However, Beta Theta Pi still has a record on file. Currently they are recolonizing, meaning students will be starting up a new group on campus.

Kyle Daniel, president of the IFC, runs the IFC executive board along with 10 other members elected by each of the chapter presidents at OSU.

“It’s very nice to see another large international organization like Beta come back to Oregon State,” Daniel said. “I’m in favor of expansions, I think the more the merrier.

The IFC and OSU have laid out standards for fraternities and sororities to keep up with while they remain open and a part of the community.

“I think it’s really important that we strive for community values from all of our chapters,” Daniel said.

JP Peters is the assistant director of the Center for Fraternity and Sorority Life where he serves as an adviser to the IFC, Unified Greek Council and National Pan-Hellenic Council chapters.

“I am excited to welcome Beta Theta Pi back to the OSU community,” Peters said in an email. “Nationally, they are a strong fraternity that focuses on Men of Principle. And speaking with OSU Alumni who are a part of Beta Theta Pi, I think it would be a great addition to our fraternity community and

The IFC shows increasing interest in referring students to fraternities that might be a better suited place for new recruits, according to Daniel. Even if they aren’t a good fit for one fraternity, perhaps a different one might be

“Each chapter has its own persona, its own characteristics that make it unique and the more chapters you have the better chance some new member has of having their fit, you know, their niche,” Daniel said.

For students looking to participate in recruitment, contact Josh Fuentes via email at [email protected] or by cell phone: (513) 839-3391. He will be in the Student Experience Center plaza or Memorial Union Quad until the end of spring term.