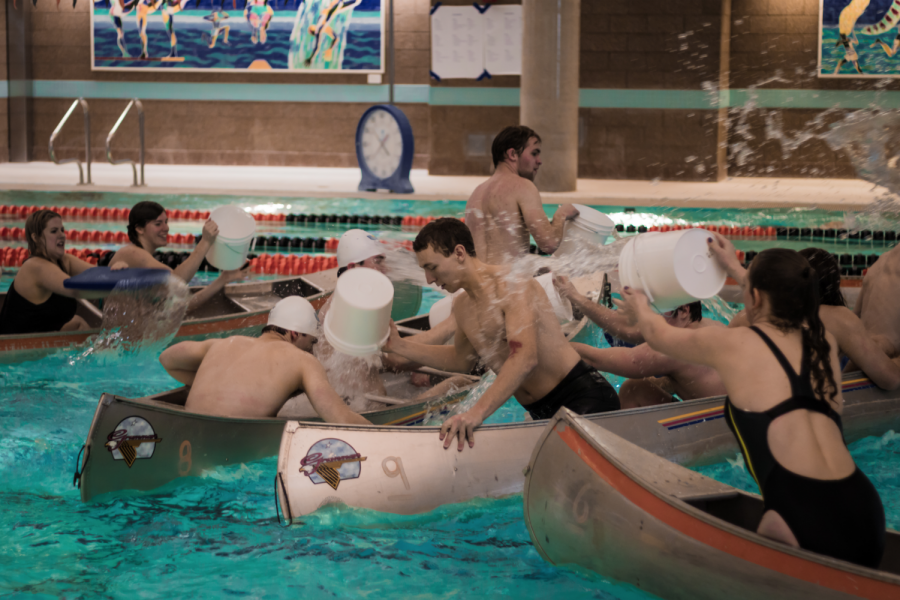 Teams attempt to sink other boats in the pool. Team Presentation Support ended with a victory.

Presentation Support comes out on top for inaugural tournament.

The goal of the game, like normal Battleship, is to sink opponents’ boats. Teams of four were placed into canoes, given buckets and kick boards and sent into the pool. Once the game started, teams had eight minutes to try to

Each game consisted of five teams, with the last canoe standing deemed the winner of that round. First place got five points, second place got four points and so on.

The game play itself was hectic. While teams tried to fill other canoes with water, they had to focus on not tipping their own boat. Every once in a while, the tipsy canoes would fling someone out, making the team play a man down. The referees, who were in the water during the game, would push canoes closer to create more chaos.

The tournament was originally made to host 16 teams, but because of ongoing requests it was pushed to 24 teams. When teams continued to form, Rec Sports pushed it to 30 teams. With that many people, Senior Sports Programs Associate Colby Schoniwitz had his work cut out for him.

“It went way better than I expected,” Schoniwitz said. “A lot of people were saying thank you for putting the event on, so I think it went great.”

The 30 teams were split into two groups of 15. Each group would have nine games, allowing each team to play three times. At the end of group play, the 10 teams with the most points would move on to the playoffs.

The semi-finals featured two games, with each game consisting of five teams. The final two teams left afloat in each game would advance to the finale.

“We had our team built already, so we came together when we heard about this event,” Darin French said of Presentation Support. “We had a great time.”

After it was all said and done, the tournament lasted over four hours and had nearly 120 people come out to compete. The event won’t be available again until next winter, so mark it on your calendars now.

“It was so cool being in the inaugural Water Battleship competition.” Molly Carpenter, a competitor at the event, said. “I’m so excited for next year. Our training starts tomorrow.”