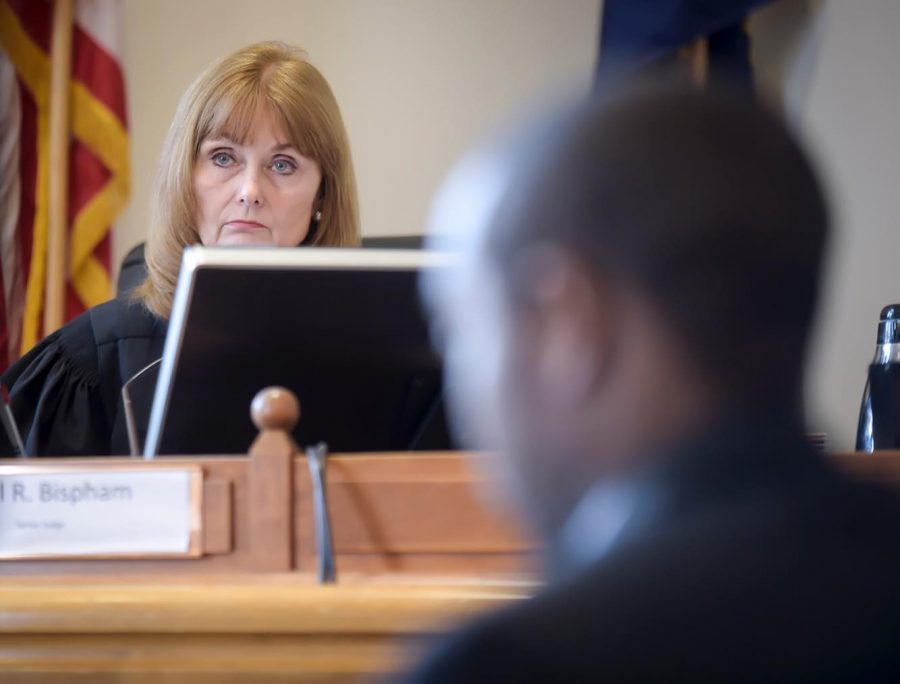 courtesy of Andy Cripe, the gazette-times

Senior Judge Carol Bispham presided over Oswalt’s arraignment. Bispham granted the state of Oregon’s requests that if Oswalt is released, all firearms in his possession are to be surrendered to law enforcement.

University will monitor legal process to inform any future actions.

Andrew Oswalt posted bail and was released from the Benton County Jail the afternoon of Feb. 2.

The Associated Students of Oregon State University graduate representative, who recently drew controversy for expressing white nationalist views, was indicted on Jan. 30 on two counts of intimidation in the first degree and two charges of criminal mischief in the third degree. Oswalt’s charges are related to him allegedly placing racially charged bumper stickers on cars in Corvallis on June 17.

According to the terms of his release, Oswalt is banned from the OSU campus, must surrender all firearms in his possession to the authorities and have no contact with any victims or witnesses in his case. Although he is not allowed to come onto campus, Oswalt still remains a graduate representative in the student government’s legislative branch.

Oswalt will face a recall vote in the general ASOSU election, beginning Feb. 12 and running through Feb. 16. In addition to the recall, Oswalt is also running again for the position he currently holds for the 2018-2019 year.

There are no specific ASOSU policies relating to members of the student government who are in jail, according to ASOSU Judicial Chair Josh Kaufman. As a state-funded organization, ASOSU would not be able to take action against Oswalt unless he is convicted of a crime or pleads guilty.

According to Steve Clark, OSU’s vice president of University Relations and Marketing, exclusions of students from the university have occurred from time to time. Because of this, the university has procedures in place when handling students in legal trouble.

“OSU’s immediate policy and practice is to cooperate with all investigations being conducted by law enforcement,” Clark said via email. “Someone who is accused of a crime, cited or charged, and lodged in jail for that alleged offense is allowed due process including a trial or proceeding with the court to determine their guilt.”

According to Clark, it is up to a student who is in jail or charged with a crime to decide to withdraw from classes or not.

Clark was unable to comment if Oswalt still remains a student enrolled at OSU or if he is still a graduate teaching assistant within the Chemistry Department. However, he noted the university pays close attention to legal processes when students are involved.

“OSU would fully monitor that entire process—including the severity of charges, sentencing and any risks and impacts to the university and the OSU community—to inform any actions it may take,” Clark said.

“So what I think of our friend in ASOSU is that he no doubt is sincere, he’s no doubt enthusiastic; he is ignorant and the things he said are incredibly stupid,” Ray said. “I will continue to speak out and continue to do everything I can to let people know here that that’s not us. That’s not who we are.”

“When you get someone who gets up and says things that are hateful and vile, somebody needs to take them on and challenge them—dare them to share the facts,” Ray said.