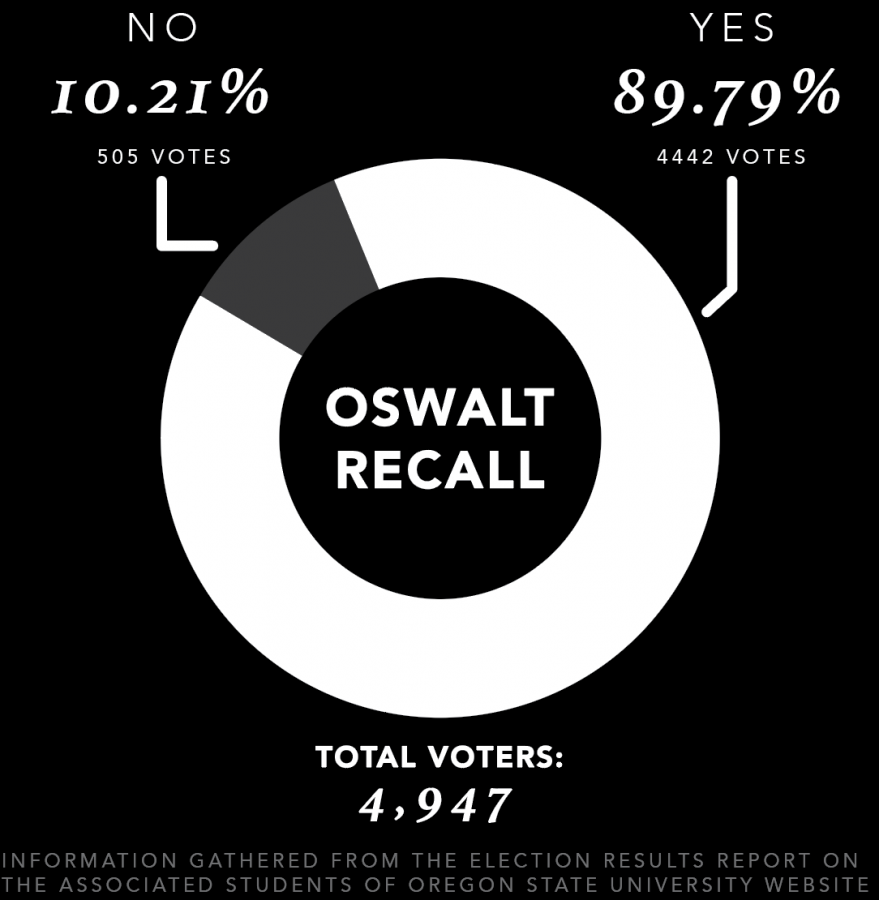 Appearing on the ballot under his preferred title ‘Rex Imperator,’ a Latin phrase meaning king-emperor, Andrew Oswalt was recalled in the recent Associated Students of Oregon State University election.

The former student government graduate representative, who has drawn controversy for expressing white nationalist views and faces two charges of felony intimidation, will no longer serve in the ASOSU House of Representatives for the rest of this year. In addition to the special recall election for his seat this term, the member of the ‘alt-right’ failed to win a re-election bid to serve in the ASOSU House next year.

Oswalt believes that students voted against him because of misrepresentation by the media and communist brainwashing in higher education.

“I think both the Marxist brainwashing, as well as the sustained legal and media campaign to misrepresent me contributed to irrational voting behavior,” Oswalt said via email.

Despite the recall, Oswalt intends to continue his participation as a member of the student body.

“I will be attending the House of Representatives meeting next week as a member of the public in a bid to make statements which I was prevented from making this past week due to a few communist agitators,” Oswalt said in an email.

Last week’s House meeting included peaceful protests by over two dozen students, faculty and community members. One protestor interrupted the meeting to swear at Oswalt, only to be asked to leave.

For ASOSU President Simon Brundage, the results of the two votes are a referendum on racism and bigotry.

“I am proud of Beaver Nation for voting in alignment with our values as an institution, and for articulating once again that diversity is our strength, and not our weakness,” Brundage said in an email.

Brundage’s successor Justin Bennett, the president-elect of ASOSU who will take office on June 1, echoed the sitting president’s message, but also noted the continued presence of Oswalt supporters in the OSU community.

“I’m proud to see that so many students took this recall election as an opportunity to stand up to this hate and make their voices heard. This is clearly a powerful message from our student body,” Bennett said via email. “Looking to the future, we know that these detestable and contemptible ideologies will not simply vanish, and we need to actively and consistently be pushing back and fighting against all types of hate.”

The incoming student government president urged all students to stand with those affected by Oswalt’s views, according to Bennett.

“Racism and bigotry have no place in ASOSU and no place on our campus. Period,” Bennett said via email.