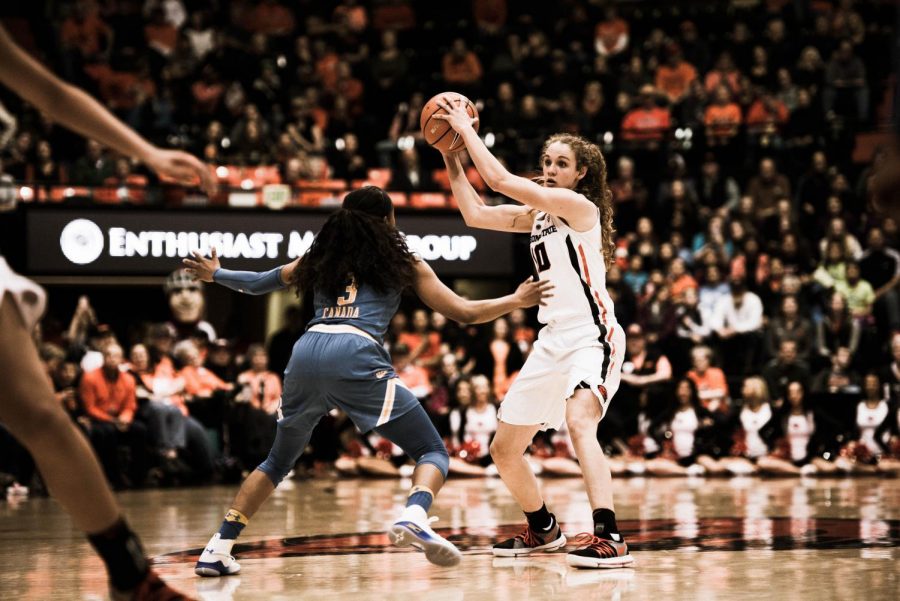 The Beavers (21-6) women’s basketball team was back at home this weekend to take on both the University of California, Los Angeles Bruins (21-5) and the University of Southern California Trojans (17-10) for the second time this season. These were the last regular season home games for Oregon State University.

OSU was first met by the Bruins on Friday night in a crucial battle as both teams battled for a high spot in the national rankings.

The game got off to a cold start, with the halftime score being just 27-24. Both teams struggled to get their offense going as OSU and UCLA came out with stout defenses and shot for a combined 37 percent from the field.

Things picked up in the second half however, as the game ended with an overtime win for the Beavers with a final score of 67-64.

Senior center Marie Gulich had herself a game as she shot 61 percent from the field, tallied 24 points and recorded a double-double on the night. Gulich ended the game by hauling in the rebound to put UCLA down for the count.

“When the time ran out, I was just super happy,” Gulich said. “Now that it’s over, I’m just very excited for the team and very proud of the effort we had tonight.”

“Scott’s play calls down the stretch were on point,” McWilliams said. “Getting the ball to Marie was our focus and she came up big for us. I’m super proud of her.”

With only a day for preparation, the Beavers were back in Gill Coliseum on Sunday afternoon to take on the unranked USC Trojans.

What was thought to be an easy win for OSU turned out to be a game on upset-alert. The game followed similar traits to the UCLA game, with a low scoring first half and Gulich leading the way to a win with a final score of 69-63.

Gulich put up 25 points and 9 rebounds on her senior day as the only active senior on the roster.

Sophomore guard Kat Tudor also chimed in with 17 points, going 3-5 on three-pointers and nabbing six rebounds on the way.

Head coach Scott Rueck was content with the win and gives Beaver Nation the credit.

“This team continues to improve,” Rueck said. “Gill is still the best place for a game atmosphere. It was absolutely awesome out there tonight.”

OSU will head to Arizona next weekend to face the University of Arizona Wildcats on Feb. 23, at 7 p.m., followed by the Arizona State Sun Devils on Sunday Feb. 25, at 1 p.m.