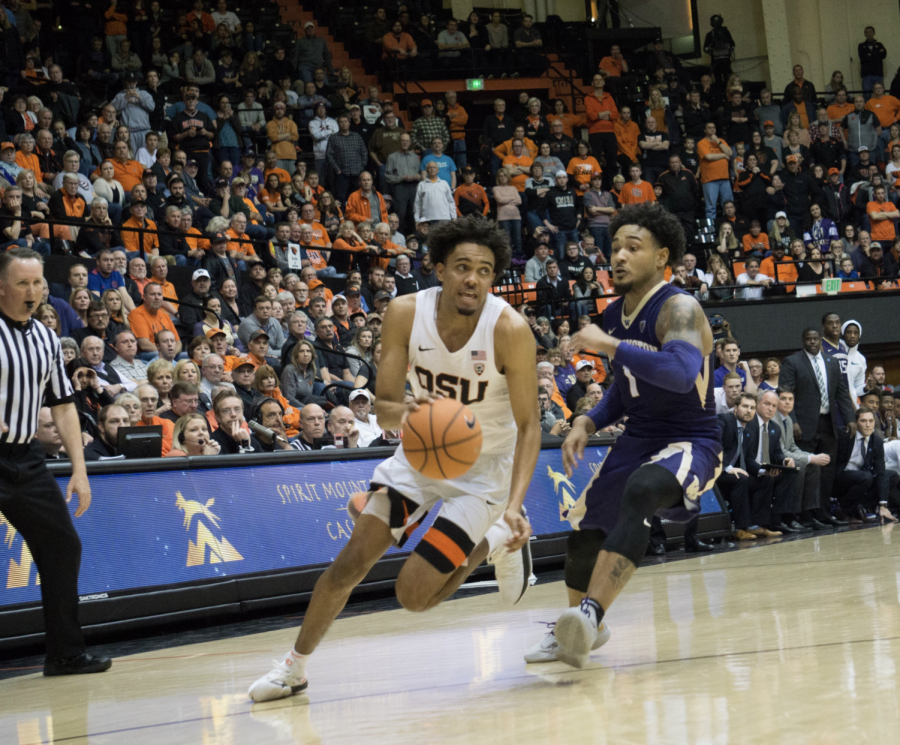 Stephen Thompson Jr. drives to the basket in the game agains the Washington Huskies on Feb. 10.

Riding a blowout victory on Thursday and a double overtime buzzer-beating shot to win on Saturday, the Oregon State men’s basketball team had a productive weekend.

The Beavers dominated the Washington State Cougars on Thursday night with an end score of 94-62 in Gill Coliseum. Tres Tinkle led the scoring with 20 points, Alfred Hollins recorded a career-high 19 points, Drew Eubanks added another 18 and the Thompson brothers combined for 36 points.

Eubanks ushered in his name to the 1,000 career point club, the 41st Oregon State player to do so. Stephen Thompson Jr. hit this mark earlier in the season. Tinkle is approaching the milestone as well, which would make this the third time in program history an Oregon State team had three 1,000-point scorers. He requires only 111 points to do so.

Robert Franks led Washington State with 17 points and Carter Skaggs added 11. Oregon State won the only meeting between the teams two years ago, 82-81, on Feb. 24, 2016 in Corvallis when Stephen Thompson Jr. made a 3-pointer at the buzzer. Thompson Jr. finished with a team-high 18 points, while Eubanks had his first career double-double with 17 points and 13 rebounds. The team really seemed to up the game of teamwork with many assists and passes, Coach Wayne Tinkle even stating, “…it’s the kind of selflessness that we’ve been looking for in this group.” The Beavers won 64-50 on Feb. 8, 2015 at Gill Coliseum when Gary Payton II led the way with 17 points, five rebounds, four assists and five steals.

Oregon State played the Washington Huskies for the 300th time on Saturday. The Beavers lead the series 160-140 overall. The Beavers defeated Washington two straight times at Gill Coliseum and held a 97-49 all-time advantage in games played in Corvallis.

Oregon State ended the game with a double- overtime stunner that culminated to a 97-94 win. Stephen Thompson Jr. scored a dramatic near buzzer beater three-pointer, sending the team and crowd wild. The Beavers began the second half trailing behind with 13 points. They then made a comeback that ultimately led the game into overtime at 80-80. Stephen Thompson, Jr., with the pressure on, missed two free throws with four seconds left in the first overtime that could have put the Beavers ahead. The game then soon went to the double- overtime at 87. The Huskies led the score in the second overtime and would eventually tie the game at 94-94. Washington’s Dominic Green made one of two free throws before Thompson Jr. connected from behind the arc. Thompson Jr., scored 22 points overall, hitting 4 of 8 three-point field goals. He also had a career-high six steals. Eubanks added 18 points and 13 rebounds. Washington was led by Noah Dickerson’s 28 points and 12 rebounds. As of right now, Oregon State is 13-11 overall, and 5-7 in the Pac-12.

The Beavers travel to Los Angeles next week to face UCLA on Thursday, Feb. 15 and USC on Saturday Feb. 17. Both games start at 8 p.m. and will be televised nationally on FS1.