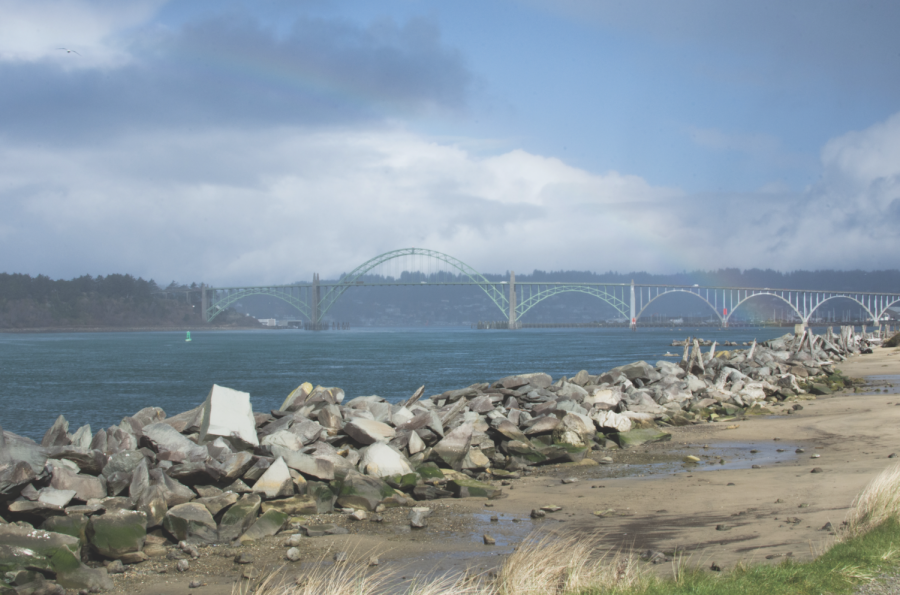 Yaquina Bay Bridge from the south Jetty in Newport, Ore.

In 1971, the state of Oregon became one of four Sea Grant states, alongside Rhode Island, Texas and Washington. Since then, Oregon State University Extension Services has paired with the Sea Grant College Program to establish research projects along coastal stations, according to the Oregon Sea Grant history webpage.

“The OSU150 Sea Grant Festival is one of four Festivals during OSU’s 150th anniversary celebration,” Signs said in an email. “The Festivals recognize our Land, Sea, Sun and Space Grants. OSU is one of only two institutions in the United States to hold all four grants.”

“We as a program support research and education focused on issues oriented around coastal and marine issues, from engaging with the fishing industry to working with the community on hazard warnings and ocean forecasting,” Walker said. “There are opportunities to support research that addresses societal issues and it provides student opportunities.”

The Sea Grant Festival spans many disciplines connected to OSU marine studies, both supported by the grant and not, Walker said. Topics vary from oceanographic technology such as gliders and research vessels to sustainability and restoration of oceanic systems.

“I think it is a really great opportunity to highlight the work that is being done here at OSU that is not only supported by OSU Sea Grant, but the broad marine domain that is here at OSU,” Walker said. “The topics cover a broad diversity of opportunities including some directly supported by Sea Grant, and others that focus on seafood or field stations where Sea Grant may not have a direct impact, but may orient around the same marine and coastal issues.”

The Sea Grant Festival is holding festivities up and down the Oregon coast. This may increase access to those who are not local to the OSU Newport community, Walker noted.

“I would encourage everybody to see what they can. I know it is a challenge to get to all places on the coast,” Walker said. “But having the events broadly distributed, there might be something everyone can see whether you are down in Port Orford or up in Astoria.”

Celebrations range from individual learning experiences to workshops and tours of OSU marine science operations depending on interest, Walker said.

“Self-guided tours or what we call quests, which are these very fun kind of clue-based hikes and you have the guidance and you can just go on a tour,” Walker said. “There’s one on Coos Bay, Cape Perpetua. There’s one based working with Taft Elementary and one in the Lincoln Ocean District. It’s a fun and family-friendly experience.”

Students have an opportunity to take a behind-the-scenes tour of the Sea Grant Festival, Signs said. Signup is through the official OSU150 webpage.

Sea Grant events are held inland as well, including lectures and discussions happening on the Corvallis campus, and a screening of the movie “Saving Atlantis,” Walker said.

“There are things for people to do based in Corvallis, things like touring the Hinsdale wave lab and Kickoff day, and there are things up in Portland,” Walker said. “I think there’s a screening of the movie which will also be here in Corvallis and in Newport. And there’s the OSU150 exhibit in Portland as well.”

The Hatfield Marine Science Center is also holding events for the Sea Grant festivities. The Center has been closed for the last two months and is opening its doors in time for the Festival, Maureen Collson, HMSC’s Visitor’s Center communications manager, said.

“We’ve been closed since early December doing remodeling and construction, so it’ll be our first day open,” Collson said.

Only the front half of the center will be open to the public. The second half of HSMC will open on March 26.

Spreading knowledge and awareness of marine-based issues is important for both the scientific and public communities, Walker said.

“Honestly I think (this is) sort of an increased opportunity for people to learn about OSU Sea Grant and OSU investment—sharing information, engaging with the community,” Walker said. “I think this is a nice opportunity to expand broader awareness for a lot of the issues that go on in respect to our coastal environment in a way that’s fun and interactive.”