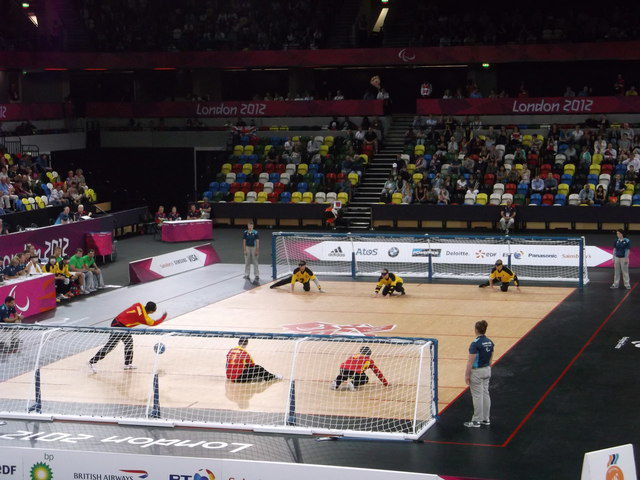 Goalball is played with three players on the pitch at one time, with the players attempting to throw the ball into the opponents net. Goalball has been  a Paralympic sport since the 1976  Summer Games in Toronto.

Goalball is designed for the visually impaired, ‘2011-12 Denver Nuggets’ leave with victory.

Oregon State University intramurals is known for offering a variety of uncommon events. On Feb. 3, students were able to test their skills and abilities in a lesser known sport—Goalball.

Goalball is a unique tournament offered at OSU, allowing students to try something they have likely never played before.

The game involves two teams attempting to roll a ball across the opponent’s goal line. The catch? Everyone is blindfolded.

Goalball is a sport designed for the visually impaired, but has been adapted for intramurals by wearing blindfolds.

Each team has three people on the court at a time and must use their bodies to block the ball thrown at them. The ball, which has bells embedded inside of it, must pass the defenders and stay inbounds to score. The court is marked with a textured line so players can keep their whereabouts and line up correctly.

Players must stretch, dive and bend in order to stop the ball, resulting in some hard hits and sore hips.

“The ball is surprisingly heavy, so the impact can hurt,” Stephen Bianchi, senior, said. “My teammates and I got hit in the face a couple times, but in the end it’s all fun.”

This year, teams made their way to McAlexander Fieldhouse to play on the basketball courts. The tournament started with pool play, with each team playing three games. The top four teams at the conclusion of pool play advance to a single-elimination bracket.

At the end of the day, the “Peaky Blinders” and the “2011-12 Denver Nuggets” found themselves in the championship game.

The game was as close as it could get, with the teams trading scores throughout the first half. The “2011-12 Denver Nuggets” held a slight 5-4 lead

The “2011-12 Denver Nuggets” found momentum in the second half, going up by as much as three scores, but the “Peaky Blinders” were not done yet.

“The win was very rewarding,” Trevor Folska-Fung, junior, said. “It was fun being blindfolded with my friends and not knowing what was going on

Goalball, like most tournaments at OSU, is free to students. There is no need for prior knowledge of the sport and any student can sign up.

“No one knows the rules so we are all learning together,” Brody Larson, senior sports programs associate and organizer of the tournament, said. “I’m happy we can offer fun, adaptive sports