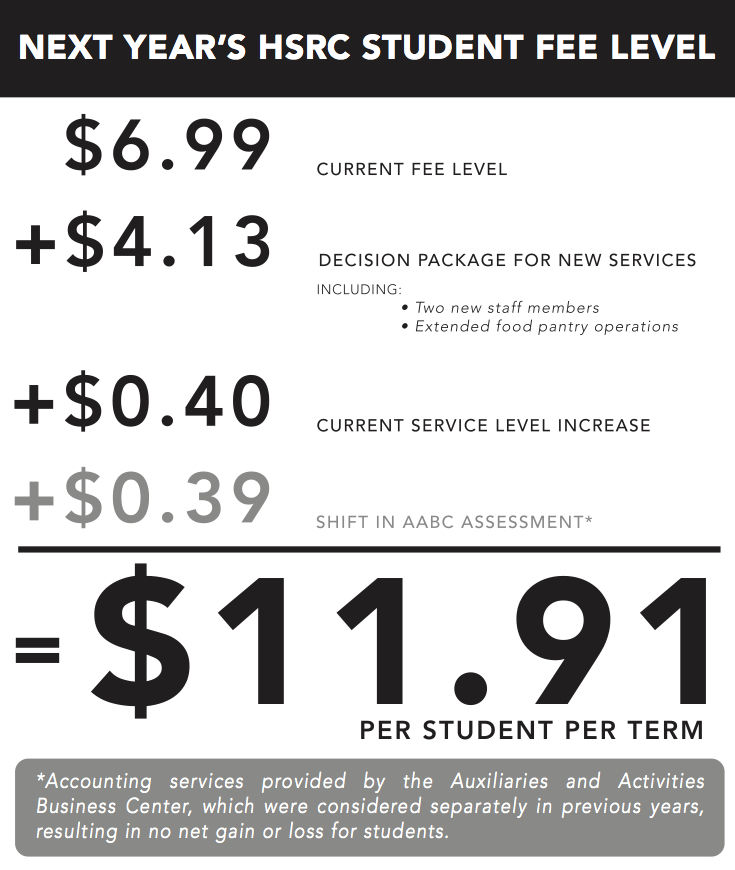 The Oregon State University Human Services Resource Center, the only program of its kind in the country, will likely receive increased funding from student fees next year.

The center currently operates a food pantry three times a month, as well as offering a free textbook lending library, laundry and other services, according to Assistant Director Nicole Hindes. The Associated Students of Oregon State University Congress and President have approved an increased fee level for the HSRC to hire two new full-time staff members, will eventually have a food pantry once a week and expand other operations. All told, the HSRC will still be the third lowest of all 10 student fee-funded units.

While other universities provide aspects of the HSRC’s services, such as a food pantry or textbook lending, they are offered by different departments and organizations, according to Hindes. The HSRC is special and unlike anything that exists anywhere else in the country.

“It is a best practice to have everything under one roof because no student likes to be run all over the sun,” Hindes said. “Because we were born out of student fees, we have a student-need-driven model.”

Hindes pointed to the reporting of how many students are using their services, compiled into a document known as the State of Affordability, as the most impactful part of the new budget. This document would be a tool to give ASOSU and university administrators more data in order to advocate for increased funding beyond student fees to benefit low-income students, such as state, federal or grant funds.

“I think it is challenging for administrators who have a place to stay and enough to eat, to understand the lived experiences and challenges some low income students go through,” Hindes said.

Next year, the increase in fees will also go toward a Basic Needs Navigator to help students in financial crisis. According to Hindes, the center’s current sole full-time employee, this second staff member will assist students who suddenly need housing find a place to live, as well as help connect students to resources beyond the HSRC itself. For example, the center has a list of 504 students who are likely eligible for the federal Supplemental Nutrition Assistance Program, but aren’t receiving these benefits, commonly known as food stamps.

The following year, a Food Security Programs Coordinator will join the team to oversee the expansion of the food pantry, as well as coordinating workshops to teach students how to cook and shop on a budget. They would also organize SNAP outreach efforts, a task currently being handled by an hourly student worker, according to Hindes.

For the assistant director herself, she expects to focus her work on the larger vision of the center and managing day-to-day operations, according to Hindes.

“I think I am still going to be working with students because they are really important to me,” Hindes said. “I am excited to see more professional staff and graduate students to help me. The challenges of being the only full-time person means that it is not always easy for me to see that someone else cares how many students don’t have a place to stay at night.”

The ASOSU Congress denied an initial, lower fee request from the HSRC in order to provide them with more funding to benefit low-income students. This vote led to the formation of a mediation committee made up of members of Congress and the Student Fee Committee to reconsider the budget. According to SFC Chair Peter Schwartz, who served on the committee, he expected the mediation process to run smoothly because the entire committee wanted to increase the fee level from the original request. Last year, the budget for athletics tickets went to mediation and drew contention from some members who sought to lower the fee level.

“It was nice to have a more relaxed, constructive meeting,” Schwartz said. “I had a feeling there would be people from Congress who would want to add to the ask even higher.”

When the mediation committee met, the majority of the group wanted to increase the fee level at the rate of the ask, with a minority arguing for an even larger increase to direct the money to an emergency fund for students. Schwartz personally is glad the fee level was kept to the strategic plan laid out by the HSRC, according to the SFC chair.

“I think it was coming from a place of goodwill, but the marginal increase they asked for was well-thought-out, and I would not have been comfortable with a larger increase,” Schwartz said.

One of the committee members who advocated for an ever higher increase was House Speaker Pro-Tempore Thomas Olsen, who drew a distinction between the HSRC and some of the other student fee-funded units, which have a less direct impact on student’s lives in his view. By addressing issues of food and housing insecurity, the HSRC ensures some students have the opportunity to remain students in the first place.

“At the end of the day, student fees are the single biggest thing students can do to affect life on campus and how we can help others out,” Olsen said. “If you want to put a real number on how much students get out of these programs, it’s the increase in salary they get because the HSRC was able to help them get a bachelor’s degree.”

Olsen was glad to see HSRC providing concrete data on the number of students they serve, making it easier to argue for increased funds. For him, all units should bring forward more decision packages—the options to increase fee levels to provide new services, according to the speaker pro-tempore.

“A department may indicate there is some level of unmet need, but if they do not present it to us in time, we are not able to do anything about it,” Olsen said.

Even with the coalition supporting the unit, Hindes was unsure what to expect going into the mediation session.

“This was definitely my hope,” Hindes said. “I could not even imagine someone would offer more. I’m just really heartwarmed about the support we get from students on campus.”