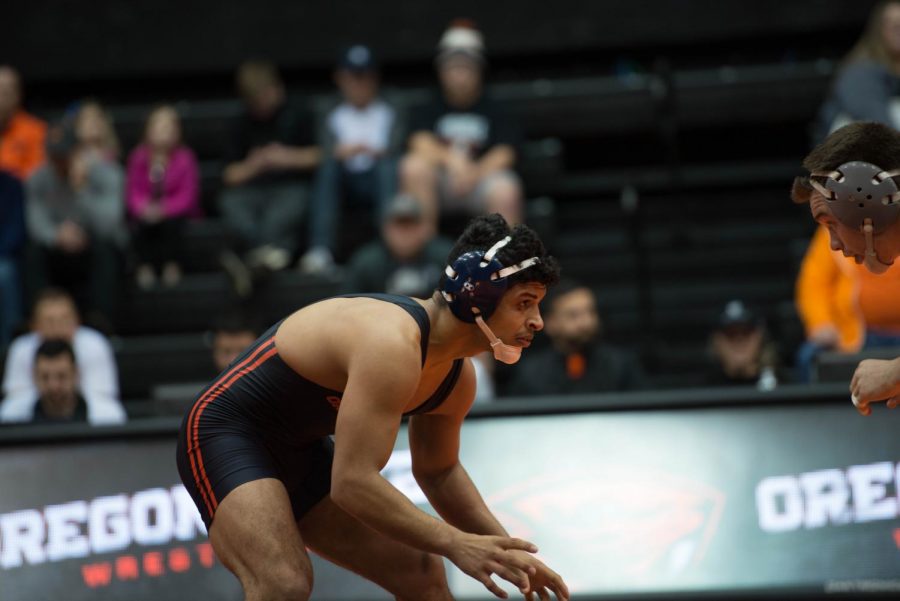 Riding on the back of their previous win, Oregon State University wrestling took home their second victory of the season and beat Cal Poly with a score of 34-11.

This score is similar to last week’s against Northern Colorado, where the Beavers won 34-10.

Head coach Jim Zalesky said that last week’s win contributed in a positive way to the match this week.

“Any time you win you can build off of it. It’s a lot easier sometimes to build on a win than a loss,” Zalesky said. “I think some guys wrestled well against Northern Colorado and some guys kept it going here (at this match).”

Pac-12 wrestler of the week redshirt freshman Devan Turner credits their wins to changing up their strategies. Turner was on top of his game as he only surrendered 2 escape points to achieve his second win of the season.

“It just shows that before this we hadn’t been wrestling that well and we’re changing things around,” Turner said. “Whatever we’re doing is working so let’s keep doing that.”

Turner has set plans on how to improve his next match.

“Just keeping my legs out on bottom, getting away faster. (Not doing that) slowed me down a lot,” Turner said. “I wrestled a good match last week, so I’m just trying to replicate that.”

No. 15 ranked redshirt junior Corey Griego commented on Turner being named Pac-12 wrestler of the week. Griego was in the only matchup of the night that had two ranked wrestlers where he scored 13-3 over No.23 Tom Lane.

“He (Devan Turner) needed that. I think it’s awesome. Good for him. I mean, he’s a stud. I feel like he hasn’t proved it until last weekend,” Griego said. “Of course we see it in the room all the time but now he’s really shown everyone how great he is so that’s good for him.”

One highlight of the night was redshirt senior Jack Hathaway’s bout, where he accomplished his eighth fall of the season. This placed him at 13th all-time in the OSU record books.

Another highlight of the evening was No.12 Ronnie Bresser, who achieved five takedowns before he secured 4 points for OSU. He also used his signature move known affectionately as the “flying squirrel” to score a takedown.

OSU will be back home as they take on Fresno State in a Pac-12 matchup Monday Feb. 5 at 7 p.m. in Gill Coliseum. Tickets can be found online at osubeavers.com.

For more information on the wrestling team go to OSUBeavers.com or Twitter.com/BeaverWrestling