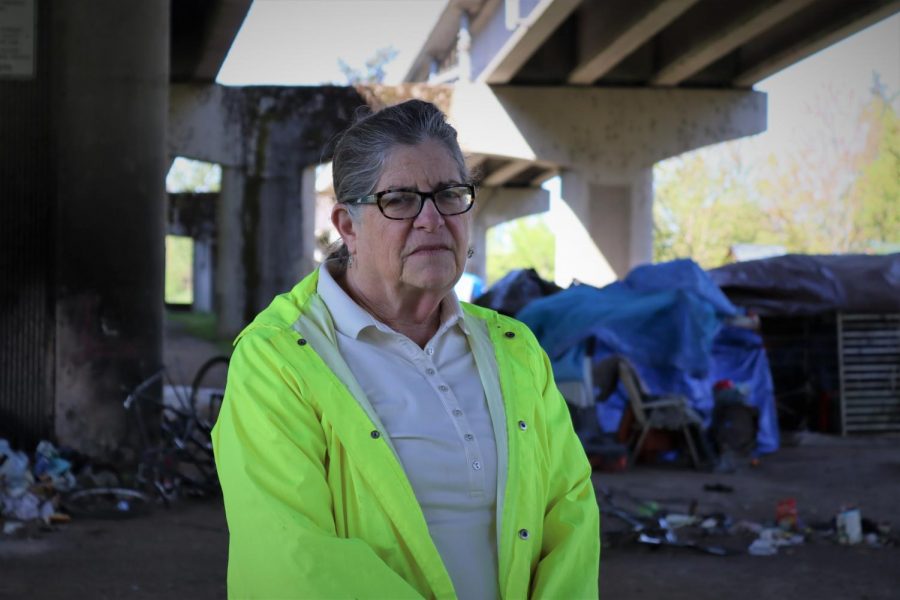 City of Corvallis Ward 1 Council Woman Jan Napack can be seen by homesteads underneath the Corvallis bridge. The city of Corvallis has passed legislation around these homestead with a focus on relocation and safety for taxpayers.

A Corvallis City Council meeting in early April saw the passing of an ordinance that will fully enforce Corvallis’ illegal camping laws that state there can be no tents set up within 50 feet of sidewalks, multi-use paths, parks and natural areas beginning May 15.

This most recent ordinance comes at the end of several phases of clearing out the homeless camps, specifically attempting to alleviate the strain put on the businesses and residents of south Corvallis.

“As a City Councilor, our interests [are] in preserving the interests and safety of our houseless residents,” said Jan Napack, city councilor for ward 1. “But we need to get our local government back to where it needs to be.”

The homelessness issue in Corvallis has certainly put a strain on the city’s government and according to Napack’s own calculations, the city has spent over $1 million on the issue. About $380,000 is provided by the five year “Livability Bond,” meaning that about $700,000 of additional funding was needed for homeless/houseless issues in 2020.

On April 19, the Council allocated  $40,000 of their discretionary fund to assist in funding the cleanup process.

“We had quite a bit of damage occurring in the parks, especially the riparian areas—they’re very sensitive areas,” Napack said.

“Riparian areas” are in reference to the banks of the Mary’s River where a lot of campers have laid their tents. The Councilor expressed concern for the Corvallis Parks and Recreation Department, stating that they have been left with the burden of handling campers on their property, and with spring in full bloom she predicts residents will be using the Parks and Recreational facilities more than before. As the vaccine rollout continues in both the Linn and Benton counties, it is safe to say that restaurants and retail shops are itching to open their doors for an influx of people, but with the issue as prominent as it is, nearby businesses are being adversely affected.

Simon Date, president of the Corvallis Chamber of Commerce, predicted that consumers might have been less likely to go to businesses near the camps later at night because of an increased chance of a “negative interaction.”

The First Alternative Natural Foods Co-op’s General Manager Cindee Lolik spoke at the Council meeting on April 5, saying that due to some of the campers poor behavior, the Co-op’s staff and customers have been faced with consequences they didn’t deserve.

According to Lolik these consequences have resulted in the southside Co-op spending tens of thousands of dollars cleaning up used syringes, human waste, hiring security personnel and placing security cameras down.

Collins is a long standing member of the community, and after 13 years at Hewlett-Packard Collins wanted to get involved in public service. The Unity Shelter is a 501(c)3 non-profit that seeks to be the umbrella organization that coordinates Corvallis’ resources for the homeless like the Men and Women’s shelters.

Councilor Napack has expressed that the city is working on a solution, commissioning the Home Opportunity Planning and Equity board to work on finding that solution. Napack is a member of the board, stating that the recommendations for the program are pending, until a future committee meeting during the week of the 19.

Collins believes that the fix to the homelessness issue is affordable housing, but understands that isn’t something that is easily attainable.

“We need to look for more creative options to get people into safe spaces,”  Collins said, “Tent camping is not ideal, but it can be done in a way that is safe, the safe camp that started at the First Congregational Church is a good example of that. It started as a collection of tents… over time it developed with some infrastructure, a fence around it and staffing.”

Collins referred to the First Congregational Church at West Hills that has created a faux shelter for the homeless, which he said “has become, literally, a safe space.”

Since starting as  Executive Director, Collins has shifted the Men and Women’s shelters to be open 365 days a year, instead of the typical November-March schedule most homeless shelters provide.

“[Being open all year] is a big move; it’s expensive, it’s a big staffing change all around,” Collins said. “We have gotten lucky with some grant applications this year and we can afford to do it… being able to stay open all year has been a goal for a lot of folks for a long time, and I think this year we’ll be able to pull it off.”