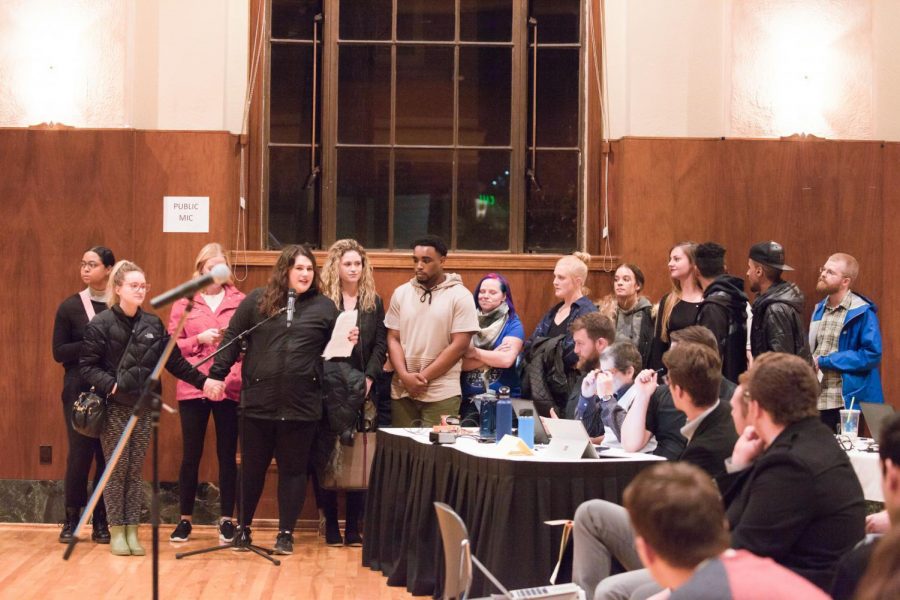 Both chambers of the Associated Students of Oregon State University Congress met for its annual joint session to vote on its’ recommendations for next year’s student fee levels. During the nearly three hour public meeting on Wednesday, Jan. 24, all requests passed, except for the Human Services Resource Center. Members who voted against the HSRC budget did so in order to provide the center with more funding than proposed.

The center provides assistance for students experiencing hunger and poverty. The failure of its fee level automatically triggered a mediation process. According to Speaker of the House Peter Halajian, a part of the 14 member group, the bill failed during the joint session because many senators and representatives felt the unit was not receiving enough funding.

“Our committee will be tasked with creating a new recommendation that will be able to pass both houses of Congress,” Halajian said via email. “While I am not normally a fan of student fee increases, I am happy that we can have a discussion about the HSRC and how much money it is given. The work they do is crucial to many students on our campus. My goal for my part on the mediation committee is to increase the recommended student fee level, while at the same time being fiscally responsible.”

Each fee discussed was introduced as a joint bill, with the level set by the student government’s Student Fee Committee, which deliberated last term to arrive at the proposals Congress assessed. They approved fee levels for all units excluding the HSRC, which include Diversity and Cultural Engagement, student tickets to Beaver athletic events and the ASOSU itself, will be sent to the ASOSU President Simon Brundage. Brundage will have the option to sign or veto Congress’ recommendations, which must be further approved by OSU President Ed Ray and the university’s Board of Trustees, and finally the Oregon state legislature.

Before the proposals for the 10 student fee-funded units were discussed, ASOSU Judicial Council Chair Josh Kaufman announced that the option to recall Rep. Andrew Oswalt will be on the ballot in the upcoming ASOSU election. Oswalt, who has aligned himself with the white nationalist “alt-right” movement, still participated in the proceedings, including his votes against Diversity and Cultural Engagement and Orange Media Network receiving their funding from all students.

Over a dozen protesters attended the session, ostensibly to denounce Oswalt and his ideology. Emily McDonald, a philosophy major who spoke during the open comment period, addressed her comments to Oswalt specifically.

“To tolerate the ideology of the ‘alt-right’ is the active stripping of free speech from non-white individuals because all expressions of hate are accompanied by the threat of violence,” McDonald said. “It is not a viable political position to claim that some human groups are more or less human than others. You will not be comfortable in your community because this community will not recognize you as a member.”