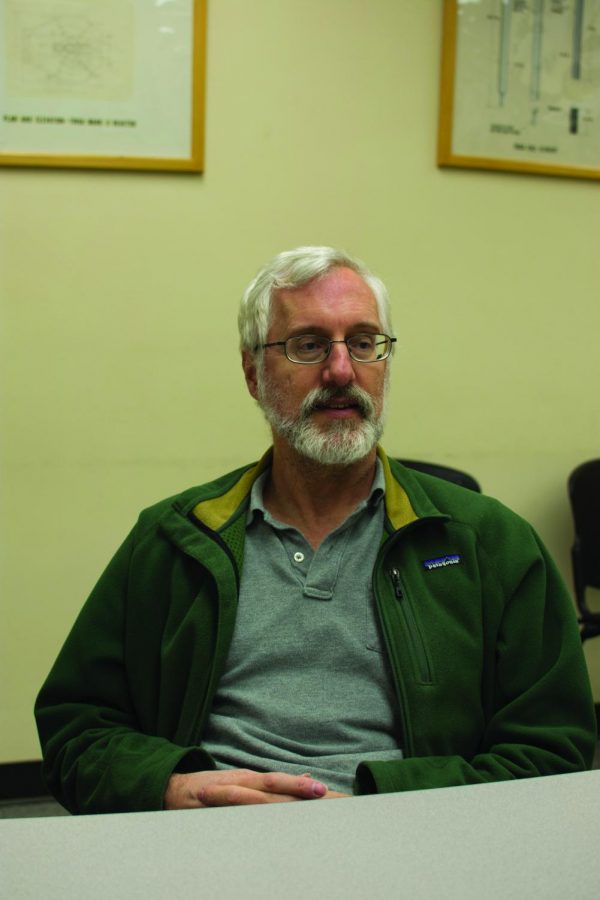 Todd Keller has been the reactor administrator for 16 years at OSU’s Radiation Center.

Emergency planners recommend shelter-in-place response, separating self from outside environment.

Nuclear warfare is a real phenomenon in today’s society. Early on Saturday, Jan. 13, a false incoming nuclear missile alert was sent out across the island of Hawaii, demanding Hawaiian residents and tourists to seek immediate shelter. Even though Hawaiian officials soon after declared the alarm incorrect, the false alarm affected many.

“My initial reaction (to the threat) was just shock,” Isaiah Kela-Pacheco, president of the Hui O Hawai’i club, said. “Hearing something so sudden in such a short time is pretty devastating, especially when the amount of time they have to find shelter and everything is short. In reality, we can’t really do anything from up here. You can either take it two ways: just not accept it in shock or you can just break down and cry.”

According to Kela-Pacheco, the Hui O Hawai’i club offers a “home away from home” feel for its Hawai’i-native members getting used to the feel of the university. While some meet new people and network, the club is also used for students to connect with people who share their same values and culture from home, especially when disaster like a missile threat surfaces.

Both of Kela-Pacheco’s parents live on O’ahu, where the alert was sent out by the Hawai’i Emergency Management Agency at their headquarters in Honolulu. His grandparents, along with some of his other family, live on the big island of Hawai’i, and Kela-Pacheco was not sure how big of an impact the missile would have on them because of their distance from the alert center.

“So I heard the alert from my mom because she called me and that’s the first I’d heard of it,” Kela-Pacheco said. “In my head I was trying not believe it and hoped that is was just a false alarm, or that maybe we’d shoot it down. You don’t really want to expect that it’ll happen.”

According to Kela-Pacheco, he knew he couldn’t think any other way than hope it wouldn’t or couldn’t happen. He felt hopeful that the Navy could do something to stop the missile if the alert was real.

“I’m sure students reacted to the alert in different ways,” Kela-Pacheco said. “They called off the alert in about 45 minutes, which is longer than the time it would actually take for a ballistic missile to hit. And so by the time students up here had found out about the alert, people were already saying that it was a false alarm.”

Many questions regarding the false alarm still exist: what would happen if a nuclear missile alert was real? For those at Oregon State University, there are a number of officials and students developing ways to battle this reality scientifically, resourcefully and emotionally.

According to OSU’s Vice President of University Relations and Marketing Steve Clark, Benton County and the State of Oregon would launch the Emergency Alert System to warn everyone of the affected areas.

“OSU could re-transmit the message via the OSU Alert system to ensure the OSU community receives the warning,” Clark said in an email. “We would provide additional shelter-in-place instructions and other updated protective information in the message.”

According to Clark, the university recommends that students and employees review the university’s emergency preparedness website by students and faculty alike takes place. Extensive and valuable information is placed there, as well as how other emergency responders will inform the public on safety concerns and guidelines.

“Emergency planners believe the best response for a nuclear incident that might affect OSU would be to shelter-in-place,” Clark said in an email. “As we would suggest students and employees respond other hazardous types of incidents, including some natural disasters, that we could not evacuate from.”

According to Clark, shelter-in-place means to immediately seek shelter and isolate your inside environment from the outside hazard. It does not require any specially designed or designated building, but the closest building that you can get into and are able to shut the windows and doors. In the event of a nuclear incident, going to the lowest floor possible and seeking interior hallways is best.

“We encourage students, faculty and staff to keep their OSU Alert cell phone information updated,” Clark said in an email. “This is the system that we send messages and information via text and phone call.”

According to Clark, building and campus managers plan and hold drills that utilize evacuations for things such as natural disasters like fires and even tsunamis from the Oregon coast.

“The plan outlines numerous procedures and responses that the university recommends and requires,” Clark said in an email.

Safety plans have also been put into place as response to situations relating to the nuclear reactor on the OSU campus.

Todd Keller, the reactor administrator of 16 years at the OSU Radiation Center, has the job of keeping safe the nuclear reactor on campus, doing its safety analysis, reviewing changes to the facility and remaining in charge of the emergency response organization.

“If there is a fire or we’re leaking coolant or something like that, we activate our emergency response organization,” Keller said. “I’m the one that’s gonna be running that and also interfacing with outside organizations.”

The nuclear reactor does not produce any sort of electricity, according to Keller. The energy produced is in heat and radiation form, which the facility considers waste products as a result of neutron, beta, gamma, alpha and x-ray radiation. Neutron radiation is the facilities primary research tool which is used primarily for radioactive dating, Keller added.

A power plant in Washington called Columbia Generating Station teams up with the Radiation Center at OSU every few years to run drills that simulate situations where potentially hazardous amounts of radioactive material is released, according to Keller. The Radiation Center analyzes soil and water samples from CGS detailing what and how much radiation is in the samples, so they’re acting as a support facility for contamination purposes.

“We have done some training scenarios with emergency organizations in Portland,” Keller said. “Their concern isn’t so much a missile or a nuclear explosive, as it is a dirty bomb like an RDD, Radiological Dispersal Device. Again, we can act as an analytical support facility and tell them how and what it is, how much of this stuff is around and how close you can get to it.”

According to Keller, the facility is required to run standard drills to exercise both their interface with external groups and within the internal organization. External groups have a memorandum of understanding, which includes Good Samaritan Medical Center. Good Samaritan provides medical services and are prepared to take in radiation-exposed patients who are not only injured, but contaminated.

“We also have an MOU with the Corvallis Police Department, Oregon State Police and campus security of course,” Keller said. “So we’ve got all of the groups that you might think of, we’re prepared to interface with them if need be. If it’s something like an RDD, dirty bomb or a nuclear weapon, we can get help from across the country.”

The Oregon Department of Energy is trained to deal with things such as a nuclear weapons, according to Keller. The Radiation Center has contacts to the Nuclear Regulatory Commission that helps the facility cope with emergencies involving radioactive material.

“If there was a drill or an announcement that was a false alarm, I have a direct line to campus public safety dispatch,” Keller said. “They can get in touch with the Corvallis Police, the state police; if necessary, I know OSU has sort of an emergency notification system on campus.”

Although the Radiation Center would not be the first facility to know if a nuclear missile was headed for the U.S., their primary responsibility would be to shut down the nuclear reactor, according to Keller.

“There’s a public information officer, Mr. Steve Clark, who’s a part of our response plan where we’re required to call him in the event of any sort of emergency,” Keller said.

The emergency response office encourages students to reach out to loved ones to openly discuss concerns related to the idea of disaster strikes at nuclear intensity, or any extremity. Counseling and Psychological Services are also on campus to support students in any need of assistance.

“The university recognizes that significant national and global events and reports in the media may cause concern among our students,” Clark said. “When that occurs, we encourage students to reach out to friends, family and others to discuss and openly share concerns and questions. Meanwhile, OSU’s Counseling and Psychological Services staff are available to assist students in need of support.”