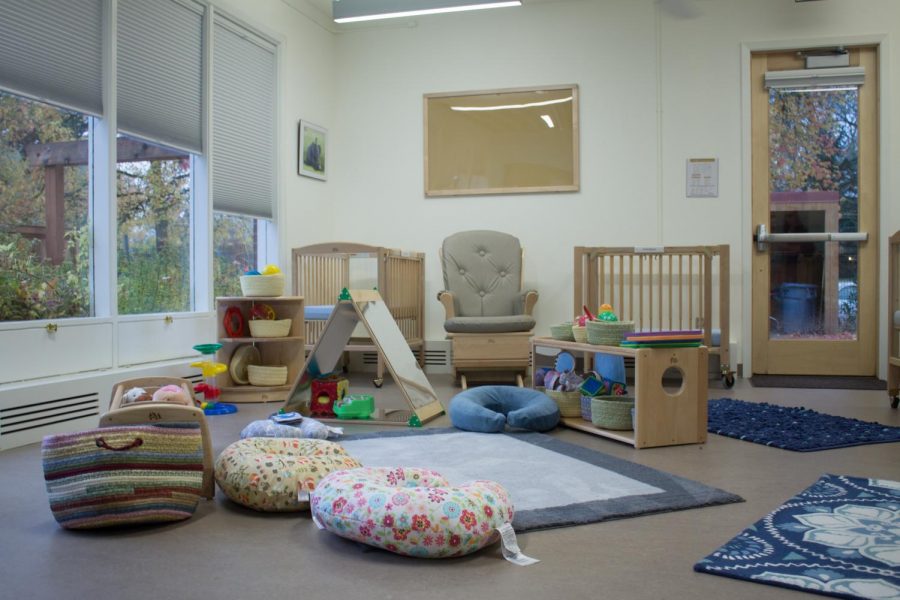 Azalea House is a new child care facility located on 1050 SW Madison Ave. Azalea House offers child care for students that are parents, as well as OSU faculty and staff with dependents.

The sight of children playing, brightly lit rooms with smooth wooden chairs, blocks and cribs, a sizeable outdoor space with more wooden toys: this is the view that greets anyone who walks into Azalea House, the recently opened child care center at Oregon State University.

According to Amy Luhn, director of the Family Resource Center, the fall of 2013 marked the beginning of Azalea House. It was at that time the Student Community Center partnered with University Housing and Dining Services to create a space for campus child care.

“Years went into the planning and execution,” Luhn said via email. “(We) included student focus groups and info gathering to ascertain what students were looking for in terms of a space on campus that would cater more to the needs of a non-traditional student.”

OSU and the greater Corvallis area have a major shortage of available child care, according to Luhn. Therefore, it was especially important for a new child care center to be built just to increase capacity to help with the shortage.

“Benton County ranks as the second-most expensive county in Oregon for child care,” Raju Woodward, a reporter for the Corvallis Gazette-Times, said in an article (“Increasing Cost of Child Care”). “The average annual cost of toddler care in Oregon is $10,392, a figure that ranks it the seventh most expensive state in the nation for child care.”

According to Luhn, OSU attempted to bridge this gap with the new child care center. Building for Azalea House began in the summer of 2015, and the center opened in November of 2017, Luhn added.

“The architects did an amazing job of creating a light-filled space that is warm and inviting,” Luhn said in an email. “(It) was designed by Hennebery Eddy Architects Inc., with contributions from our office, Marilyn Read, an OSU professor in Design and Human Environments, as well as some guidance from our state child care licensing specialist.”

“The student fee portion is allocated through the ASOSU SFC process; this coming Wednesday evening is the joint Congress where they will be reviewing the SFC fiscal year 2019 budget recommendations for all student fee-funded units,” Luhn said.

With the recent opening of Azalea House, Luhn, along with the other individuals working in and associated with the center, are working to increase enrollment.

“As of now, the center is still ramping up enrollment,” Luhn said via email. “We opened the center just a month ago and early November is not an ideal time to enroll. Many families have accepted enrollment but are postponing starting at the center until the New Year. By the end of February it’s anticipated that the center will be full, at capacity.”

Azalea House is operated through Bright Horizons, which has a contract with OSU and is partnered with the FRC, according to Nancy Campbell, regional manager of Azalea House.

“We looked into operating the campus child care centers internally, as OSU operations, and the costs associated with that are tremendous,” Luhn said in an email. “Quality child care is a very financially difficult endeavor. Given the cost implications and the ability to contract with a quality child care service vendor, we decided to forego internal operations.”

According to Campbell, their priority is to provide the university students and faculty with additional child care options because there’s such a demand for quality programs, particularly for infant toddler care for the university population.

“We have been able to hire a stellar staff so far, many of which are in the Early Childhood Education field of study right here at the university,” Campbell said. “We are very excited about our teachers and all the creative expertise they bring to the program for the children and families.”

There is such a high demand for child care for OSU student and faculty parents in Corvallis, some families have been on a waitlist for years, according to Tania Henry, the center director for Azalea House.

“Often parents get on a waitlist when they are expecting, because there is such a high demand,” Henry said. “We partner with the university to expand the child care options available to their families. We are very excited to be here serving this community.”

The FRC works closely with Azalea House to make sure they keep the ratio of children they accept at 50 percent student children and 50 percent faculty children, according to Henry. Azalea House accepts children from a waitlist provided to them by the FRC, as well as new applications from the OSU community.

“In addition to funding this center in terms of building it, the FRC also offers some subsidies for student families based on their income levels that will offset the tuition,” Campbell said.

Azalea House is located on 1050 SW Madison Ave. The staff is happy to provide information and/or tours upon request. They can be reached by their email [email protected] or by phone at 541-737-9057.