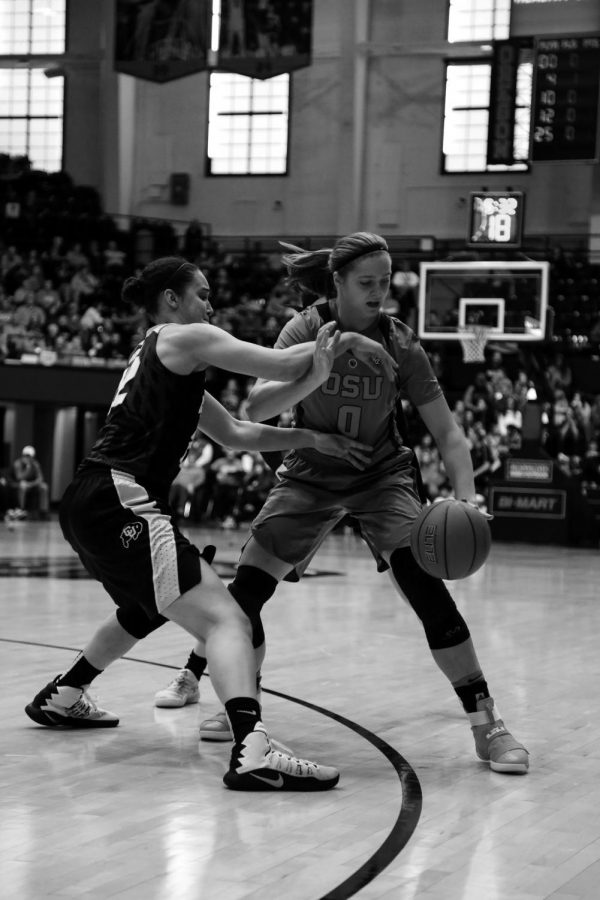 Just starting out her second basketball season at Oregon State University, point guard Mikayla Pivec has caught the attention of many from around the Pac-12, and the entire nation. Since she stepped onto the court in late 2016, her name has sat high among the stats sheet and has yet to come down.

In her debut game against Lamar University, Pivec tallied up a team-high of three steals. From that point on, number zero has been electric for the OSU girls basketball team.

As a freshman, Pivec averaged seven and a half points, five rebounds and two assists per game while holding up a .423 shooting percentage. After her performance, she was awarded a spot on the 2016-17 Pac-12 All-Freshman Team.

With basketball in offseason, Pivec decided to join women’s track and field late to throw the javelin 142-4 feet, the fourth longest recorded throw in OSU history.

Now a sophomore, Pivec is off the track and back in the gym. The 2017-18 basketball season is currently underway and Pivec has yet to cool down. With 14 games played, she is averaging 12.4 points, seven rebounds and five assists per game, as well as maintaining a .500 shooting percentage.

“I’m really proud of Mik,” Rueck said. “I love the way she’s approached it, and now she’s playing a different position. That’s a lot to take on, it’s been really impressive and she’s a great example to our team.”

Following the departure of senior point guard Sydney Wiese, who is now with the WNBA’s Los Angeles Sparks, there were some large shoes to fill on the court for the Beavers. Having played shooting guard last year, Pivec stepped into the position and continues to make an impression.

Throughout her career, Pivec has had some stellar performances on the hardwood. During her sophomore debut against North Dakota, she put up 15 points, 15 rebounds, seven assists and three steals as the new starting point guard. In their most recent game against USC, she hit a half-court shot at the

Number zero has certainly made a difference on both ends of the court for OSU these past two years, and with the national championship looming ever so close, Pivec will be the one to watch.