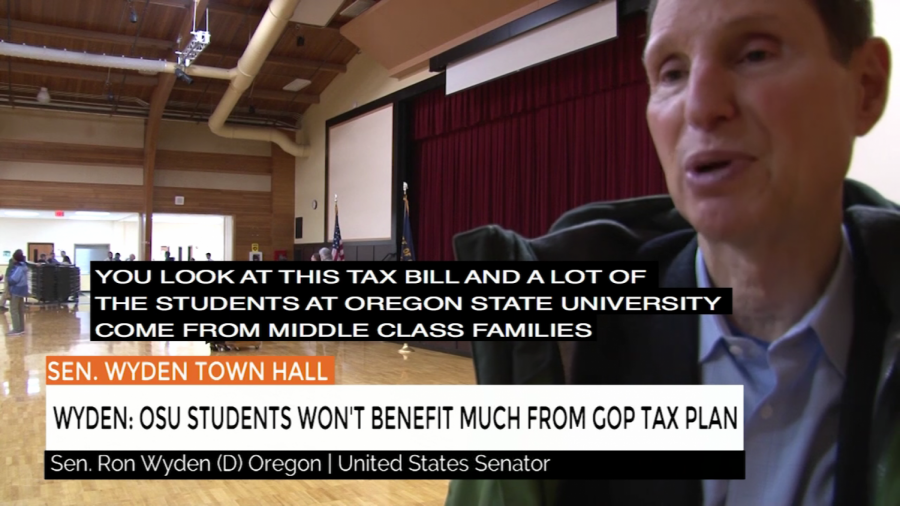 After the passage of the Republican tax plan in the past congressional session, Wyden explained how the new tax cuts did not do enough for middle class families.

“According to what was in the paper (Saturday), from the State Revenue Office. If the average Oregon tax filer gets paid twice a month, they will get a tax cut of $32.31 per paycheck.”

Wyden added later, “You look at this tax bill and a lot of the students at Oregon State University come from middle class families and they’re not going to benefit much from this tax cut.”

According to Wyden, many democrats like himself worry that the cuts will force many federal organizations like the Environmental Protection Agency to suffer from lack of funding as well as disproportionately helping out the top 1 percent.

In a speech Wyden gave on the Senate floor last December,

“The basic proposition on offer is taking money and healthcare away from middle-class Americans to pay for tax cuts of the multinational corporations and the powerful,” Wyden said.

“The comments of the last few days indicate you can’t set the bar any lower, than what we’ve heard. What does it say to the world when our government condemns an entire continent,” Wyden said. “Words have real consequences.”

In addition to President Donald Trump, Wyden addressed the implications of Russia’s interference in the 2016 presidential election as well.

“Steve Miller, one of the presidents top advisors, is always saying that there was a massive amount of voter fraud in the last election. I said ‘I haven’t seen it’ but if you (Steve Miller) think there’s been all this voter fraud, the Trump Administration should support my bill to take Oregon vote by mail national so there would be a paper trail.”

“If you share my view that the Russians are really after our (democratic) institutions, I think Vladimir Putin is a fascist. No democrat has said it, no republican has said it, you want to protect elections? Have a paper trail ballot.”