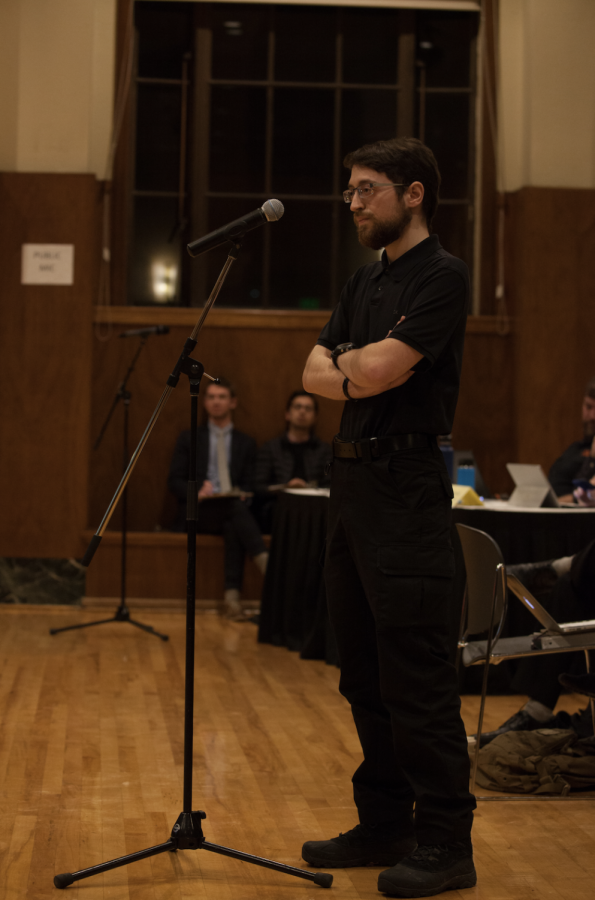 Andrew Oswalt, a current Associated Students of Oregon State University graduate representative, speaks during the ASOSU Congress joint session on Jan. 24. Oswalt, who has expressed white nationalist views, faces a recall vote on Feb. 12. Oswalt is also on the 2018 candidate list for a graduate representative position.

In the upcoming Associated Students of Oregon State University election, “alt-right”  Rep. Andrew Oswalt will be on the ballot in two places: as a candidate for next year’s House of Representatives and switch special segment for his recall from the same position.

Oswalt drew controversy for expressing white nationalist views in an interview with The Barometer, and is the owner of a Confederate flag hanging in a window across the street from the Lonnie B. Harris Black Cultural Center. His recall was announced at last week’s joint session of both chambers of the ASOSU Congress, where the body voted on next year’s student fee levels.

The election, where voters will decide next year’s President and Vice President, members of Congress and the Student Fee Committee, as well as Oswalt’s recall, will take place online beginning on Feb. 12 at 12:01 a.m. and last until Feb. 16 at 10 p.m. According to ASOSU Judicial Council Chair Josh Kaufman, this is the first occasion the procedure has been used in the student government’s history. As provided in Article VII, Section B of the ASOSU constitution, the recall was officially initiated with a petition signed by eight Senators, whose accuracy was certified by Kaufman himself.

“Two thirds of those who vote would need to vote in favor of recall in order to remove him,” Kaufman said. “Assuming that happens, then as soon as the election is certified on that night as being accurate, he would be removed from his seat.”

Despite the effort to recall Oswalt, he is still eligible for the position next year, regardless of the outcome of the recall vote. To hold a seat, graduate students must have a GPA of 3.0 and be enrolled in at least five credits. Any undergraduate student is eligible for ASOSU office if they are taking at least six credits and have a cumulative GPA of 2.0. No student seeking election can be on conduct probation, according to Kaufman.

Oswalt is one of 12 candidates running for five open graduate seats in the House. Currently, he is one of three graduate representatives in the chamber. According to House Speaker Peter Halajian, the lack of knowledge about student government in general contributed to Oswalt gaining power in the first place.

“I think it is obvious his views increased the number of graduate students running,” Halajian said in an email. “We have had very low voter turnout as long as I’ve been at Oregon State and many students are unaware of the good that we do.”

Kaufman explained that there is no minimum voter turnout rate required for the recall vote, either in the ASOSU constitution and statutes or in the cases the JC has ruled on.

“We are just going to take the constitution at face value and say that it is two thirds of those who vote on the recall,” Kaufman said. “Beyond addressing legal concerns, a recall will give the students the chance to make a resounding statement about what they think of Rep. Oswalt’s ideology.”

Last year, only 12.8 percent of OSU students voted in the student government election, according to ASOSU Vice President and Chief Elections Officer Radhika Shah. She attributed years with higher turnout rates to students paying close attention to contentious issues on campus or nationally. To increase awareness of the election, this cycle Shah and the organization as a whole had a $5,000 elections budget. The election timeline has also been adjusted from last year, with campaign season beginning two weeks earlier and voting lasting an entire week, instead of three days.

Shah reminded students that they should analyze all candidates through multiple lenses to see who reflects their opinions and values.

“You are electing a representative and this person should definitely have views that are inclusive and just and representative of what the student body at OSU wants,” Shah said.

According to Kaufman, he fully expects students at large will vote to recall Oswalt.

“Within the organization most people do not approve of Oswalt’s views, but we need to have respect for due process and have respect for the laws of the state of Oregon and federal laws, which supersede our own procedures,” Kaufman said. “We do not want to feed into the narrative that Rep. Oswalt wants to put forth—that he is being victimized or that he

For ASOSU President Simon Brundage, allowing students at-large to decide Oswalt’s membership in the organization was the correct decision.

“White nationalist and supremacist rhetoric has no place in ASOSU, and is a microcosm of a much greater moral scourge,” Brundage said via email. “I am proud to see Congress take steps to repel and reject its influence on our campus.”

While other methods of removing Oswalt were discussed when his views became public, the organization’s leadership settled on recall because there were legal concerns over the need to protect Oswalt’s right to free speech, according to Kaufman.

“ASOSU is a state agency and the First Amendment protects you from actions taken against you by the state for expressing your views, no matter how abhorrent,” Kaufman said. “The one thing that the First Amendment does not protect you against is voters.”