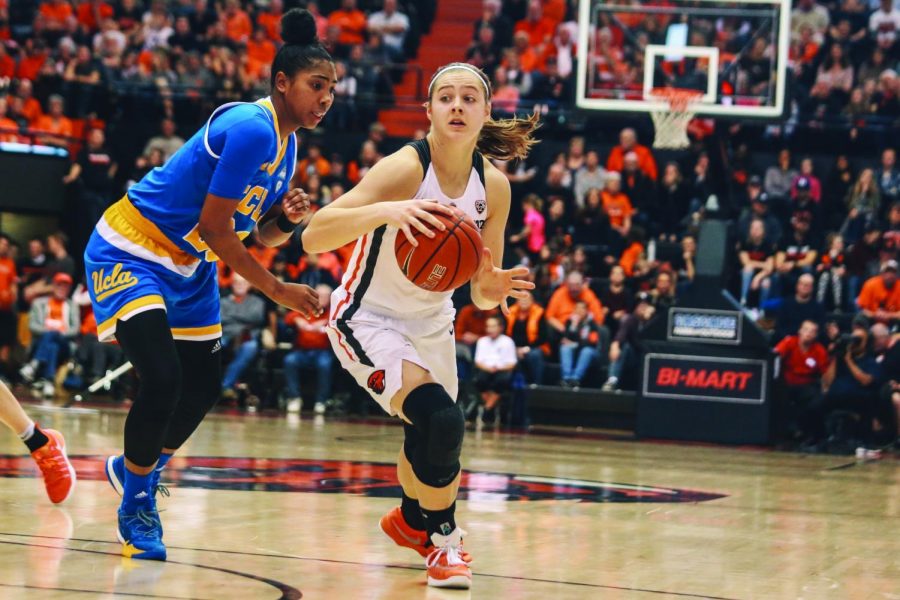 With 12 games underway and a civil war victory, men’s basketball is 10-5 overall and has already surpassed the number of last year’s total wins. They held a six-game winning streak until falling to Kent State 79 to 78, which was the longest winning streak the team has had in 13 seasons.

Forward Tres Tinkle returns this year after sitting out the last 26 games last year with a broken right wrist. So far, he leads the team in points per game averaging 18.3 and 7.1 rebounds per game.

Women’s basketball has risen to number 16 in the Associated Press rankings and second in the Pac-12 behind Arizona State. Their record is 11-4, with losses to No. 2 Notre Dame, No. 17 Duke, USC and a brutal 84-49 defeat to No. 14 UCLA, breaking their eight-game winning streak.

Sophomore guard Mikayla Pivec returns for her second year and leads the team with 16.5 ppg and 7.1 rpg.

Senior center Marie Gulich is on the preseason watchlist for the Naismith Trophy. In the 2016-2017 season, she was selected for the All-Pac-12 Selection.

Sophomore guard Kat Tudor also remains a key player on the team. She is currently ranked first in the Pac-12 in 3-pointers per game.

Iowa State came out on top beating OSU in all but four weight classes for their first win of the 2017-2018 season. Sophomore Kurt Mode, redshirt junior Corey Griego, Bresser and Dhesi won in their respective weight classes.

Their next match is home against Wyoming Jan. 14, at 7 p.m. Pac-12 Conference play begins on the road on Jan. 20, against 2017 Pac-12 Wrestling Champions Arizona State.

Oregon State walked away from the 69th Husky Invite with two top finishes and six NCAA B cuts in early December. Sophomore Felicia Anderson and junior Arianna Letrari ended on top in their prelims. This put the team in third going into the finals.

Anderson, Letrari and freshman Callan Jackman all left the invite with personal bests. However, the team did not stay for the finals due to fall term finals, finishing with 361 points in fourth place.

Coming off of a 124-100 loss against San Diego State in late December, the team will go head to head at home against UCLA Jan. 12.

With the majority of the team being underclassmen, the Oregon State women’s gymnastics team is relatively young with a combined total of six juniors and seniors out of the 19 total gymnasts. At the Orange & Black Exhibition 16 of the 19 gymnasts performed with four being freshmen in December.

The team is currently ranked No. 8, according to the College Gymnastics Association rankings.

Last year, the team took second in the Pac-12 Championships with a final team total of 197.4, falling to Utah. Oregon State’s very own Kaytianna McMillan, former senior, walked away with the title of Pac-12 Gymnast of the Year by a vote of conference coaches.

Their season starts off on the road against Pittsburgh on Jan. 13 and Utah on Jan. 19. The first home meet will take place Jan. 27 against Stanford.

Student tickets for all sports games are available online as long as you are an enrolled and fee-paying Oregon State student or are participating in the dual-degree program with Linn-Benton Community College. Tickets are free to students.

1. Go to osubeavers.com/student and click the “student login” button.

3. Select the sport and game you want a ticket for.

4. Your ticket will be sent to your OSU email inbox.

5. Students will need to present their ticket on their smartphone as well as their ID to be admitted into an event.