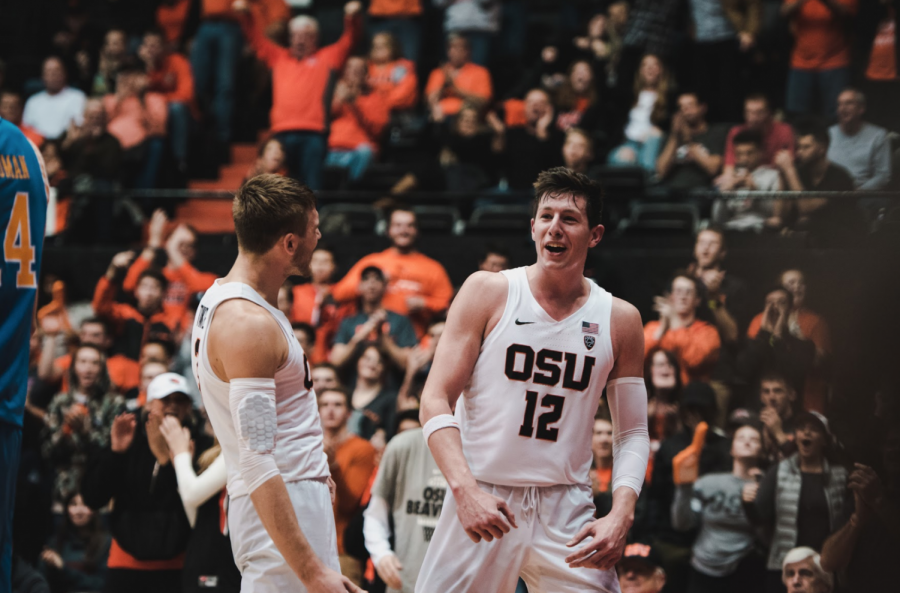 Forward Drew Eubanks and forward Tres Tinkle celebrate on the court. The team pulled off a win against UCLA.

The Oregon State University men’s basketball team came out with a much deserved 69-63 win Thursday against UCLA, followed by a 74-67 defeat against USC Saturday. They now stand at an overall 11-8 streak and 3-4 conference standing.

“We’ve got a great crowd that’s behind us,” Tinkle said at the after game press conference Thursday night.

Both teams slogged through an ugly first half but came back swinging with the help of a half-time spirit booster from head coach Wayne Tinkle lifting his arms up to the crowd in an attempt to raise their spirits even higher.

The Beavers crashed the glass aggressively all night, missing numerous put-back chances but ultimately tallying 18 offensive rebounds and a 45-37.

Eubanks led the team in rebounds, totaling a whopping seven.

The Beavers also played USC’s Trojans this past Saturday evening, forfeiting a second half lead and ending with a 74-67 defeat. This marks the eighth time this season OSU saw a second-half lead disappear.

Fouls came aplenty during the course of the game with both Tinkle and Eubanks coming to rest on the bench due to their play.

Tinkle won a complete 21 points for the team and had seven rebounds. Eubanks finished with 14 points, shooting four three-pointers. Both players received their four-foul limit through the action.

The loss appeared especially frustrating for the Beavers due to the win on Thursday and dropped the Beavers to 3-4 in Pac-12 play.

Saturday, the Beavers head to Eugene for their next conference play, a rematch against the Ducks, hoping to extinguish their current conference position.