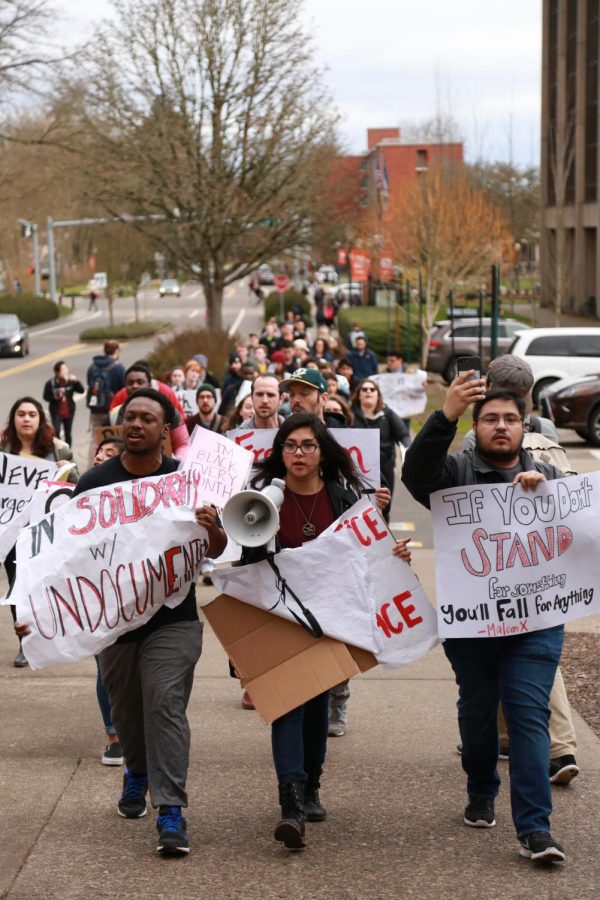 From tuition increases to federal immigration policies, Oregon State University students who exercise their right to freedom of speech are restricted by university rules.

According to Jonathan Stoll, OSU’s interim assistant dean of student life, he has tried to engage students, faculty and staff in conversations around civil rights and civil liberties, including the freedom of expression. This includes informing students of their rights, as well as the differences between unprotected and protected speech and the university’s free speech policies.

“I like to think that activism is really rooted in one’s love for their community,” Stoll said. “My role is to support students, regardless of what their ideology or agenda might be.”

OSU is bound by the free speech protections enshrined in both the Oregon Constitution and the First Amendment to the U.S. Constitution, according to Dan Larson, the interim vice provost for student life. In general, students’ and community members’ rights to express their opinions, even on controversial issues or in ways considered offensive by others, cannot be denied by the university.

However, Larson says that freedom of speech does not cover specific threats of violence against individuals, and there are restrictions on speech activities that could disrupt the safety of the university as a whole.

“There is no debating that speech can hurt,” Larson said. “It can also be used to communicate the impact of one’s speech on yourself or others. Speech can inform, enlighten and expose others to new ideas, values and perspectives.”

In a Freedom of Expression document available on the OSU website, the university affirms its commitment to protecting individuals’ rights to freely express their ideas, as well as the university’s right to respond to speech that is deemed threatening to OSU’s status as an inclusive institution.

According to Larson, he is not aware of cases when the university has engaged in this kind of counter speech opposing student protests. However, the administration has clarified its position on larger issues such as the university’s continued status as a sanctuary campus for undocumented students.

Under the current interpretation of the First Amendment, hate speech is protected speech, according to Christopher Nichols, an associate professor of history at OSU. The university can restrict speech activities based on time, place and manner restrictions, but not censor their content.

“Just because something is protected, however, does not mean that it needs to be supported by the community, of course, or listened to at all,” Nichols said in an email.

For Nichols, protecting speech that goes against the university’s stated values is particularly significant, showing the tension between the right to free speech and the administration’s desire to promote social justice. According to Nichols, OSU’s Freedom of Expression document should serve as a model for other universities.

“(OSU) does an excellent job elaborating that university members share a responsibility to treat each other with respect, by putting forth a robust notion of counter speech and directly noting the highly context-specific nature of protections of speech on and around campus,” Nichols said in an email.

These specific details can be found in OSU’s Time, Place and Manner rules, available on the University Policies and Standards Website.

Classrooms, research facilities, the Valley Library, the Plageman Student Health Center and any building designated for authorized access only are off-limits to these activities, according to the standards. Speech activities are also not meant to interrupt normal classroom activities with excess noise or physically block traffic or access to entrances, exits and roadways.

Stoll has met with students to work on building trust between the university administration and activists. He encouraged those who are interested in expressing their views on campus to meet with the Office of Student Life to better understand OSU’s policies regarding speech.

“By no means is a student required to meet with us, a student can demonstrate and do as they wish,” Stoll said. “But whether it is our office or staff on campus, I think it is helpful for students to have somebody to turn to with questions.”

Student Expression: Past and Present

Protests are nothing new at American universities, according to Nichols. Even before the Revolutionary War, students demonstrated on issues such as course offerings and the quality of food. Over the last half of the 20th century, the issues prompting students to speak up became increasingly political, beginning with widespread campus protests in favor of civil rights, Nichols added.

“Compared to the height of campus activism, including protests, during the late 1960s and into the 1970s, current universities are not confronting as much overall activity,” Nichols said in an email.

Nicholas was echoed by Steve Clark, OSU’s vice president for University Relations and Marketing, who remembered the protests he witnessed as an OSU student from 1971 to 1975 being larger than demonstrations seen today.

“They were about important social and national issues, such as the Vietnam War, racial issues, environmental protection and agricultural worker rights,” Clark said in an email. “While large and likely included contentious opinions, to my recollection none of the protests conducted at OSU at that time resulted in violence, although that was not the case at other universities or nationally.”

This past year, a number of campus protests have sparked violence and drawn national attention, such as the white nationalist march on the University of Virginia’s campus in August. According to Clark, the safety of the OSU community is a constant priority, and he has no knowledge of violent clashes on campus.

Student Activists in Their Own Words

A variety of student political groups engage in peaceful activism at OSU. Andrew Damitio, the vice president of College Democrats, explained that the group has engaged in activities ranging from canvassing—knocking on doors and calling voters to promote Democratic candidates—to attending protests and rallies held on campus. The group does not feel limited by the restrictions the university places on free speech whatsoever, Damitio added.

“I have never felt any threats to my freedom of speech, or seen anything other than a warm heart from OSU,” Damitio said.

Damitio cited an example of this support—in his mind—from last year, when students protested the names of several university buildings tied to white supremacy. Recently, this resulted in OSU President Ed Ray’s decision to rename Avery Lodge, Benton Hall and the Benton Annex because of their namesakes’ support of slavery.

“I think OSU President Ed Ray has been very amenable to protest,” Damitio said. “He responded very visibly to those protesters and I think he has shown a respect to activists.”

One student who was associated with the renaming protests, Patrick Storment, a political science major, does not feel that OSU effectively advocates on behalf of students who are targeted by hateful messages. Storment is a member of Allied Students for Another Politics, an anti-capitalist, anti-authoritarian group with no leaders.

“By going down this road of allowing freedom of speech for all beliefs, we allow corrosive and really hateful beliefs to be expressed,” Storment said. “It is more important that we are minimizing that than protecting the overall value of freedom of speech.”

Storment pointed to an event put on by the campus conservative and libertarian group Turning Point USA, in which a large beach ball was made available to students to write any message they wanted. He noted that some students choose to express racist and sexist beliefs when given the opportunity. Even if statements are not made against individuals, for Storment, allowing the expression of bigoted views is a tacit endorsement of those views on the part of that group, as well as the university itself, Storment added.

“I still think the value of free speech is important, but when you are putting people’s lives in danger in any capacity, there is no room for that,” Storment said. “That speech ball gives people the ability to say more hateful stuff.”

Beyond the free speech ball, Turning Point also drew controversy last year by holding an anti-affirmative action bake sale, demonstrating against these policies by charging white students more for baked goods than students of color. According to Mitchell York, the president of the OSU chapter, the event prompted productive conversations in addition to criticism.

“There are a lot of universities that are kind of folding underneath the pressure from students to get rid of hate speech,” York said. “How are you going to learn about the awful things that have happened in history unless people are willing to talk about it? If you are not willing to talk about the things that happened in the past, there is a good chance that it could easily repeat itself.”

According to York, he tends to disregard other students who accuse Turning Point of promoting hate speech as immature.