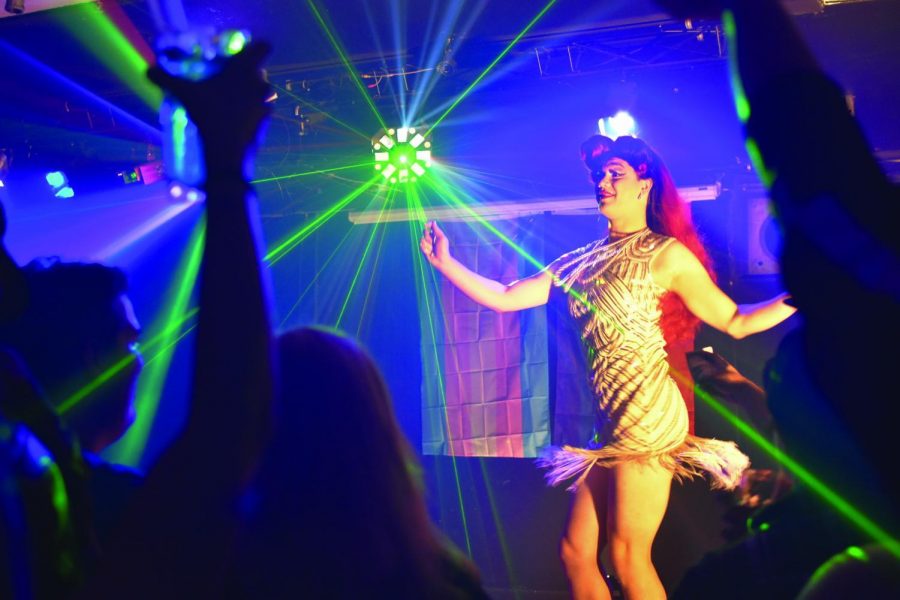 Lucille S. Balls dances for the crowd during Dam Right Dance Night. Balls is a local queen in Corvallis.

The world of drag performance is growing and changing in Corvallis.

Dam Right Drag Night, the first drag event in town to occur outside of Oregon State University, has changed to Dam Right Dance Night after taking a hiatus once The Dam, the past venue, permanently closed. The event will now be held at Tom’s Peacock Bar & Grill, located on 2nd Street.

Some of those involved with DRDN are feeling uneasy with the change due to some negative past experiences at the new venue, according to Dharma Mirza. Mirza is the mother of a local drag family, Haus of Dharma, and has been performing with DRDN since they first began doing shows in January of this year.

Mirza threatened legal recourse after staff at the Peacock prevented her from using the bathroom that matches her identity. Subsequently, he was banned from the Peacock for a while after that.

“I think other individuals have had (unpleasant) experiences there as well,” Mirza said. “So it comes with some tension that this is happening, but also it comes with a big dose of reclamation of space. I love that they’re doing something and keeping their parties going, but also as a statement about what’s going to happen in this space, the reconstructive abilities here and the forgiveness that we can show to empower the community and maybe reinvigorate that space among ourselves and the staff as well.”

According to Stephanie Lee, owner and manager of the Peacock, she’s been putting in the work necessary to ensure everyone feels safe while at her venue.

“I have owned and managed the restaurant for 13 years and I have never and won’t ever be afraid or have any kind of phobia,” Lee said. “I can be open and welcoming, and hire and work with the queer community, but how the general public might treat customers while they’re here is something I can’t control. And because it happens in our space we become unwelcoming and unsafe. Hearing that there was transphobia or homophobia is distressing.”

Luke Kawasaki, one of the organizers of DRDN, felt apprehensive about working with the Peacock at first. According to Kawasaki, the organizers have been very selective with choosing a space because they want to work with businesses that are inclusive, sizable and accessible under the Americans with Disabilities Act. The main reason they considered working with the venue initially is because it is the biggest dance hall in town, added Kawasaki.

According to Andres Lazaro Lopez, organizer for DRDN, the Peacock is focusing on how to create a welcoming and safe space, rather than dwelling on what has happened in the past.

“One of the things we’ve focused on when working with Stephanie is what policies can we put in place, what trainings can we do and what kind of language can we start using with the staff,” Lopez said.

Lee has been more than willing to get the staff the training they need to be inclusive, according to Kawasaki.

The best way to train staff is not through traditional sensitivity trainings, but through in-person discussion, according to Lee.

“The only way I can create that safe space is by actually having conversations with people and get people together face-to-face in a connective way,” Lee said. “It’s really through experience that we are training people to be more inclusive. I teach through osmosis that you can succeed in this business by using inclusive language.”

Naming the event Dam Right Dance Night instead of Dam Right Drag Night is a way for the performers and organizers to both test the waters with the new venue and show that this is an event that is popular, desirable and profitable, according to Kawasaki.

Allyson Dean is another organizer for DRDN.

“Before we dive into a new show we need to feel what it’s like to be in a new space,” Dean said. “After taking a hiatus when the dam closed, we wanted to be able to slowly build this back up.”

According to Mirza, it’s important to keep these performances going because drag is an  art form that has value for everyone in the community, whether they are LGTBQIA+ (intersex, allies, plus) or not.

“I was doing drag at their shows to survive,” Mirza said. “It was a really important thing for me being able to go and share radical love with individuals who feel supported, and also spreading support for other individuals.”

According to Mirza, these shows allow people to explore standards of femininity and have a supportive group to perform with. For others, it’s educational. There is a perception that drag performances are entertaining because they are about cross dressing, but it’s really teaching people to celebrate gender expression, added Mirza.

“If you appreciate art, drag is art,” Kawasaki said. “We have things that are very avant-garde and create political conversations. Drag is also love. There’s something to be said for performers showering the audience with love, that is powerful for the soul. You don’t have to be a part of the LGBTQIA+ community to recognize that and be able to appreciate that.”

DRDN began in 2017 and did monthly shows until July. Mirza says, it has been the biggest LGBTQIA+ event in Corvallis. There are now drag shows that happen two to three times a month at various venues, added Mirza.

According to Kawasaki, drag does not have to be done by only queer and trans people. There absolutely is room for people outside of that community to engage in the art form. The drag events Kawasaki is involved in are trying to shift the narrative from just drag queens to being totally inclusive and non-binary.

“We want performers we can rely on, and a good mix of queens, kings, gender non-conforming performers that come together and do their best,” Kawasaki said.

The drag scene in Corvallis has been able to expand because of the multitude of amazing people who are involved in it, according to Kawasaki.

“We have people who can navigate the business world and have taken it upon themselves to bring things forward,” Kawasaki said. “The bars haven’t changed, what’s changed is who is now in leadership positions and able to make things happen.”

Despite the changes with DRDN, the party continues on. The first DRDN was at the top of the Peacock on Nov. 9, and charged a $5 cover charge. According to Lopez and Kawasaki, DRDN will continue working with the Peacock for future events.

“We have lots of themed gatherings going on, and every single one of them is valuable. The difference between this one and other ones is this one is part of who I am as a queer woman,” Lee said. “This event hits close to home for me; creating space for all of the parts of the community is extremely valuable to me.”