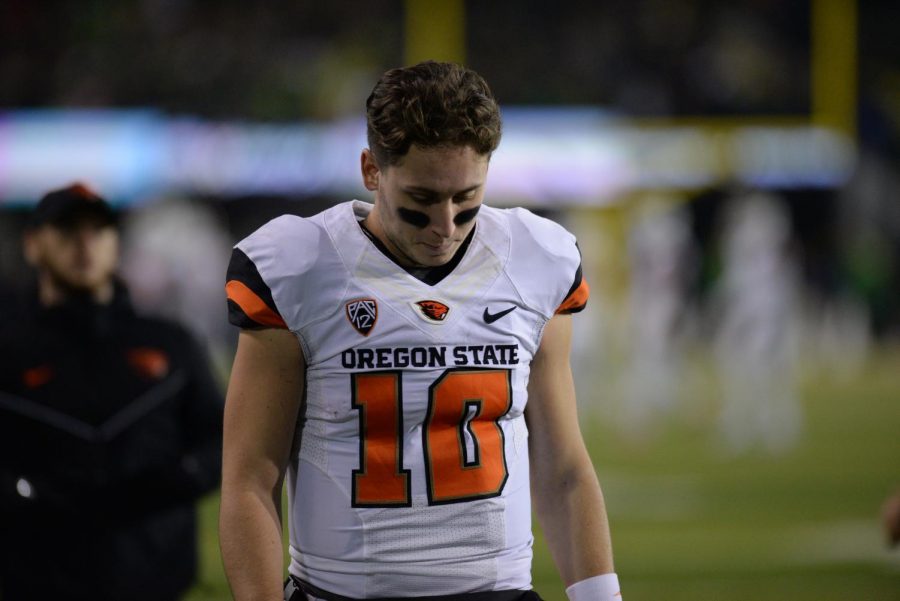 OSU senior quarterback Darell Garretson left the Civil War with an injury in the third quarter. This was his final game as a Beaver.

In a historic fashion, Oregon belongs to the

The 121st edition of the Civil War was over by halftime. Up 52 to 7 at the break, the Oregon Ducks’ firm grasp on the game was enough for them to see out the contest and emerge as the clear winners with a final score of 69 to 10.

Oregon’s 69 points were the most ever scored by a team in Civil War history, and the 59 point margin of victory also set a record.

The Oregon State Beavers were outplayed in every aspect of the game. The Ducks finished with 577 total yards offense, piling on 311 rushing yards and 266 through the air against a deflated Beaver defense.

OSU quarterback Darell Garretson finished his last game as a Beaver going down injured on an illegal hit in the third quarter. Prior to his departure the senior went 11 for 20 with 112 yards, one touchdown and two interceptions. Freshman Mason Moran stepped in to finish the game for the Beavers. In his limited playing time the young quarterback went 0 for 2. Punter Nick Porebski was able to complete a pass on a fake punt in the first half, but his one-yard completion was not enough to convert and OSU ultimately turned the ball over on downs deep in

For Oregon, sophomore quarterback Justin Herbert threw for 251 yards on 13 completions and tacked on three touchdowns through the air, as well as one on the ground. Oregon’s dominance in the run game saw two players reach the 100-yard mark—seniors Kani Benoit and Royce Freeman. With his two touchdowns in the game, Freeman set the Pac-12 record for most career rushing touchdowns with 60.

Oregon scored on 12 of their 15 drives and did not turn the ball over once. OSU punted seven times and turned the ball over on four occasions. The third and fourth quarters saw several Oregon backups see playing time, including both the second and third string quarterbacks. The final defensive drives featured just one Duck starter.

OSU running back Ryan Nall led the team with 41 yards on 14 carries. Set to graduate after winter term at OSU, Nall’s future with the team is uncertain.  Following the game, Nall said he is focusing on school for hte time being before any decisions on his future will be made.

Frustration boiled over on the OSU sideline as reports of a fight among teammates that coaches were forced to break up surfaced just before half time. OSU was called for nine penalties throughout the game, including four on four separate

The Beavers finish the season with an overall record of 1-11, and a conference record of 0-9. Interim head coach Cory Hall, who most likely saw his last game in charge of the team, went winless in his tenure despite the energy he was able to stir up midway through the year.

OSU heads into the offseason now looking to rebuild. Rumors that Cal offensive coordinator Beau Baldwin will be announced in the coming days as the new head coach have been swirling since Friday evening. However, OSU has denied that report and says the search is ongoing. As of now, nothing has been substantiated.

For OSU, 2017 was a year to forget. From losing starting quarterback Jake Luton to injury early in the season, to Gary Andersen walking away from the team and $12 million two and half years into a seven-year contract, to going winless in conference play to the Civil War blowout, there has been little for the Oregon State program and their fans