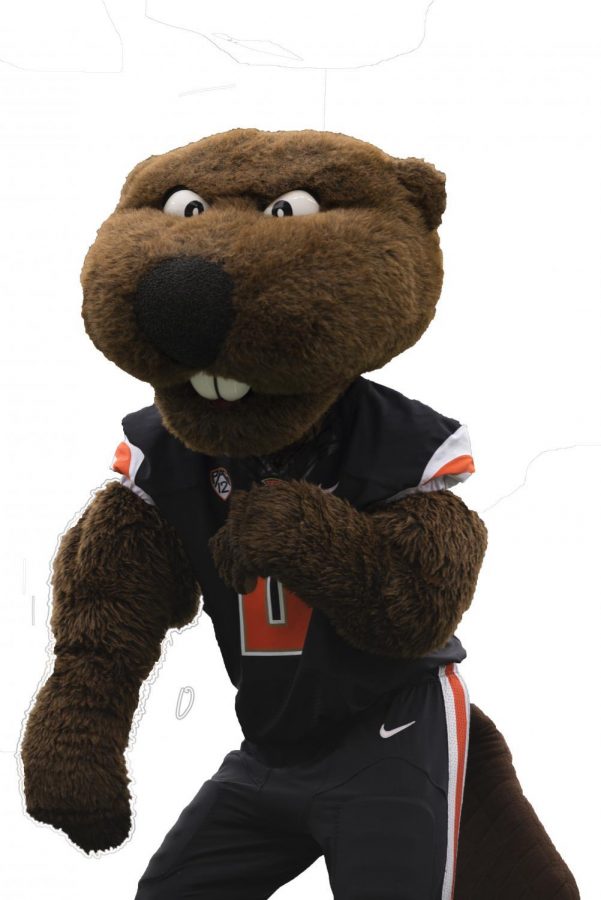 Benny Beaver cheers at a football game from the sidelines of Reser Stadium. The mascot’s identity is kept a secret in order to keep the spirit of Benny alive, according to the Associate to Benny.

Specific requirements are in place for mascot, tryouts to be set for April.

The Gill Coliseum gym remains quiet with the exception of the occasional testing of the buzzer, the stands overlooking Ralph Miller Court are empty of eager spectators, and Benny Beaver, Oregon State University’s beloved mascot, is stored away until the next game.

Believe it or not, there are specific requirements to becoming Benny Beaver at OSU. To try out, you must be at least 5 feet 8 inches or taller, and the peak is around 6 feet 4 inches. According to the Benny Coordinator, a senior majoring in kinesiology with a business minor, anyone can try out whether you are male or female.

“In the coming years, I think we want to unite tryouts with cheer tryouts,” the Benny Coordinator said. “So cheer and dance would be their own separate tryout but additionally divide the gym to partner with them because, you know, Benny and cheer go hand in hand.”

An associate to Benny, a sophomore studying mechanical engineering, saw an advertisement on Facebook last January for the tryout and showed up at the designated time and date ready for anything. According to the associate, he had no experience, but the ad did not specify he needed any.

“I went there thinking there was gonna be like a hundred people with a bunch of gymnastics routines and dances and put on a whole show for them and prove that you were capable of doing it, I guess,” the Associate said. “I showed up and there was like ten people there, so it was super easy and they just asked a couple questions and I put on the suit and tried out.”

According to the Benny Coordinator, tryouts will be held around April this year; last year they were held in May.

“I was a mascot for my senior year in high school,” Benny Coordinator said. “I basically got into it because I came from a school where nobody really grasped or embraced it and we were trying to figure out something for a pep rally and it was brought up in a student government meeting. I said, ‘Oh, I’ll try it out and see how it is.’”

Only one Benny is allowed at a sporting event; this is to avoid overlapping and having two Benny’s in the same place at the same time, according to the Benny Coordinator. A schedule is made to determine who gets to suit up and be Benny for an event or game.

“It comes with seniority,” the Benny Coordinator said. “Football, men’s basketball and more highly-attended events are obviously where Benny has the most interactions and stuff like that. He can show off his personality more, but is charismatic in all the events he attends.”

According to the Benny Coordinator, the lead student acting as Benny, Benny Beaver’s identity is kept a secret to keep the spirit of OSU alive and to have the spirit of the students and staff at OSU remain genuine and authentic. The students’ names are kept confidential for that reason.

“It’s more than association with the people who understand that Benny is the mascot, cause there’s kids involved and stuff like that,” the Benny Coordinator said. “We want to keep the spirit alive without making something seem fake or fopaux, obviously there is a certain amount of imagination to it, but you got to keep an equal amount of factual versus imagination.”

According to the Associate to Benny, it is important to keep Benny’s identity a secret, as it’s part of the fun of having a mascot.

“It’s a part of the ambiguity and it makes it so that when Benny changes, people don’t really know who’s in it”, the Associate to Benny said. “It’s not about who’s doing it. It’s about the character.”

According to the Benny Coordinator, being Benny Beaver is not a job, but a mindset and a personality. The job fell into his lap because he is the third or fourth generation of his family to attend OSU.

“When I came here I was just a student sitting in the student section like everyone else,” theBenny Coordinator said. “My original upbringing was with the Beaver Dam, the student section and as the year went on I just got more and more involved with Athletics as a whole.”

Sara Elcano, associate athletic director of fan engagement and revenue generation, says that Benny is paid, but if positions for a game are filled up, then an associate can volunteer for an event to get more experience as Benny.

“Every mascot has their own identity and I think Benny is the fun-loving guy that everybody wants to have around,” Elcano said. “He doesn’t get into the negative sportsmanship kind of stuff; he stays pretty clean, he’s very family-centric. I think he’s relatable.”

According to the Benny Coordinator, the best part of the job is getting to see everyone’s reactions and interactions with Benny at sporting events and any of the other functions he attends, athome and away events.

“It’s a feeling that you can’t even describe,” the Benny Coordinator said. “Kids, adults, doesn’t matter what age; everyone loves Benny. Benny is the best, literally.”