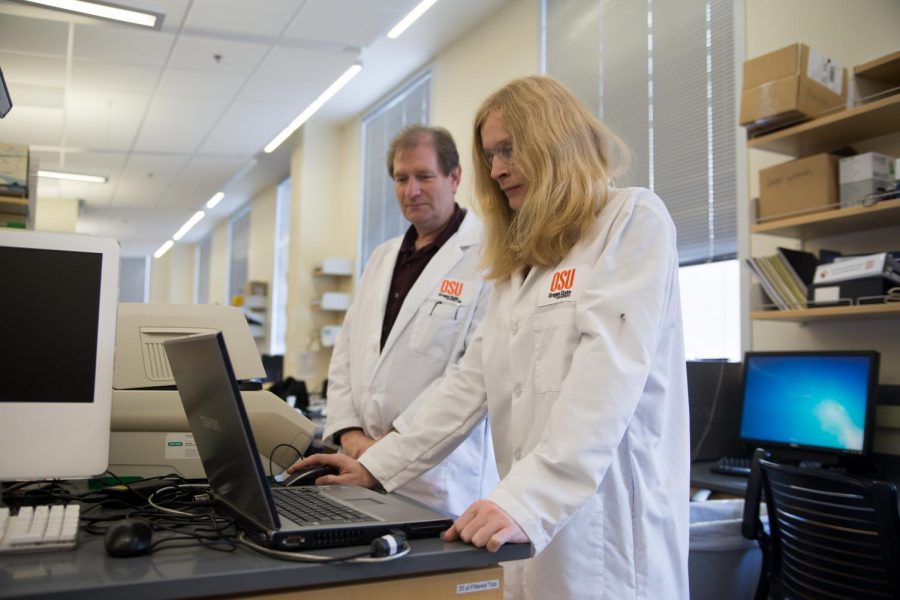 (Left) Dr. Fritz Gombart and (right) Isabelle Logan, OSU second year graduate student, study their results from the Polymerase Chain Reaction machine to measure gene expression. Gombart and Logan have been designing vitamin D-laden bandages and sutures, which have shown to speed up the healing process of wounds.

Watch out standard bandages and stitches, a new method of surface healing is on the rise. Sutures and bandages laden with 25-hydroxy vitamin D have been shown to lead to more effective and rapid healing processes.

Research published out of the Oregon State University Linus Pauling Institute in collaboration with the University of Nebraska Medical Center, has shown that coating stitches and bandages in vitamin D may lead to a more rapid and effective method of healing. This is made possible by harnessing the body’s own immune process in efforts to fight bacterial drug resistance and common hospital infections.

Researchers have created medical sutures and bandages composed of fibers loaded with vitamin D. It has been shown that supplemental vitamin D triggers the body to release an antimicrobial peptide that fights off infection, according to Fritz Gombart, an associate professor in the department of biochemistry and biophysics and principal investigator in the Linus Pauling Institute.

“We want to develop materials for use in patients that are wounded or undergoing surgery to hopefully reduce the possible risk of a variety of infections from drug-resistant bacteria,” Gombart said. “It’s a safe compound, and we basically harness the hosts’ own response to fight infection in a way that may not select for antibiotic-resistant pathogens, which is a major problem.”

Vitamin D is shown to be useful in a number of ways when it comes to wound healing, according to Gombart.

“Vitamin D is also important in wound healing and we think that it might also help to speed wound healing,” Gombart said.

In addition to speeding up the healing process, vitamin D also reduces inflammation, scarring and infection, according to Gombart.

“Surgical site infection is a major health problem and a huge financial burden. In the US, over 150,000 surgical site infections occur within 30 days of an operation, and kill more than 8,000 people each year,” said Yang Zhang, a second-year PhD student in the Nutrition Graduate Program under the School of Public Health and Human Sciences, and a graduate research assistant in Gombart’s lab in the Linus Pauling Institute.

“Treatment currently uses wound dressings that deliver antibiotics, but their use can select for survival of drug-resistant pathogens, which is a serious problem,” Zhang said. “After incorporation with vitamin D, this new nano-fiber technology enables a slow and durable release of the active form of vitamin D, which turns on cathelicidin expression, an antibacterial peptide that can improve our own barrier defense by directly killing bacterial pathogens and promoting innate immune functions.”

The thought process follows the idea of combating antibiotic resistance from the host’s point of view, according to Zhang.

Gombart and his lab collaborate with the joint-led Indra lab in the department of pharmacy and the Xie lab at the University of Nebraska Medical Center to study the mechanics and effectiveness of this strategy.

“Our skin synthesizes vitamin D, but it only synthesizes when you are exposed to the sun,” Arup Indra said. “It’s the largest source in the body for producing vitamin D.”

Arup Indra works alongside his co-lab head and wife, Gitali Indra, to study how skin wounds and infections develop, as well as how they are effectively treated. According to Gitali Indra, also a research associate professor in Pharmacy, vitamin D containing nanofibers promote effective wound healing and reduce infections around the wounds.

“These nanofibers will have a sustained release into the wounds,” Gitali Indra said. “Once that vitamin is released, then the expression of antimicrobial peptide will be induced, and infection will be managed.”

This medical strategy could potentially reduce rates of surgical infections, according to Arup Indra. This could result in more effective medical practices and higher chances of recovery without infection, thereby reducing the associated healthcare costs. Approximately 300,000 patients contract post-surgical infections, and the market is valued at 10 billion dollars.

According to Gombart, this approach is a spin-off of other strategies, including lacing nanofibers with antibiotics or antimicrobial compounds, such as silver.

“One reason we’re pursuing this is rather than targeting bacterial pathogens or microbes with a single point of attack like an antibiotic compound, we’re activating part of the immune system and might have multiple points of attack,“ Gombart said.

Genomic expressions can be seen as “selected” or “non-selected” towards a function. When a gene is selected for a certain feature, it is known to express that feature. In this case, selecting certain bacteria for resistance would mean creating more antibiotic-resistant pathogens.

Zhang says the advantages to this method include working with relatively safe substances and materials that can break down in the body.

“Because the nano-fiber material is biocompatible and biodegradable, there is no need to take the suture out of the patients, which prevents the risk of getting surgical site infections,” Zhang said. “Ultimately, we’ll have a better chance at avoiding development of drug resistance in the first place, in the case of surgical site infections.”

Further work for Gombart and his collaborators is aimed at developing and correcting new techniques, as well as lab animal modeling.

“This work is really in-vitro work. In other words, we haven’t tested on animals yet,” Gombart said. “That’s the next step. That’s what we’ve been funded to do.”

Gombart and his collaborators are funded and pre-approved by the National Institute of Health to perform animal test trials.

“And when we work with the animals, we try to make sure they don’t suffer,” Zhang said. “We will do anything we can, and we will follow every step in the protocol.”

Further application involves looking for more effective ways of delivery to the wound site, as well as understanding the mechanics of wound healing, according to Gombart.

“I think it’s an exciting field, skin biology; it’s quite interesting,” Gitali Indra said. “It’s a very easy route for drug delivery. It’s very efficient; you don’t need to go inside for surgery. You can just give a shot and the compound can be delivered innate immune functions.”