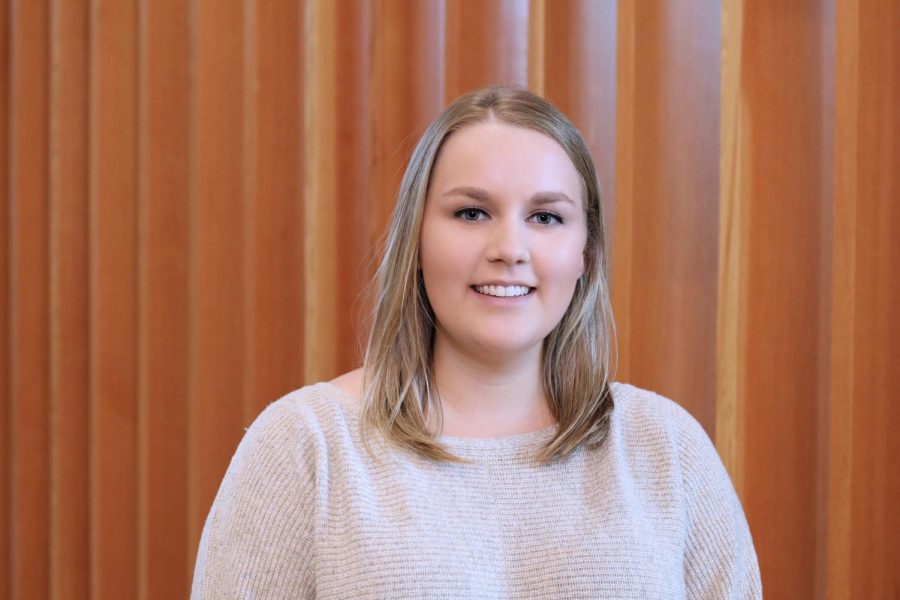 Amy Schenk is the president of Associated Students of The University of Oregon.

Oregon State University and the University of Oregon are rivals in a number of areas, from the football field to the research lab. Student government is one aspect in which the schools share some similarities, as well as critical differences.

Alongside tuition affordability and transparency, food security was one of ASUO President, Amy Schenk and her administration’s main platform planks. UO students currently have access to a community food pantry run by a local church, but she wants to move this resource onto the Eugene campus itself and attempt to secure more funding for the program.

At OSU, ASOSU President Simon Brundage recently outlined his administration’s main goals and projects this year in an annual State of the Students Address. According to Brundage, these include building an online housing platform to help students find reputable landlords and screen roommates, as well as increasing transparency by updating the ASOSU website more frequently.

Schenk’s administration was able to create task forces at the UO administration level to work on their three main issues, as well as organize a student forum to increase student voices in tuition conversations, according to Schenk. The ASUO president herself is leading the food security campaign, while her two vice presidents focus on the other two main priorities.

“I cannot praise my team enough, not only my core team, but the rest of the executive and ASUO Senate,” Schenk said. “I think we are pretty on par with where I thought we should be to make effective change on campus.”

Chief among these team members are Schenk’s two vice presidents: Internal Vice President Tess Mor and External Vice President Vickie Gimm. According to Gimm, the roles of external and internal vice presidents are self-defined rather than prescribed in the ASUO constitution. The external affairs position focuses on the wider university level, as well as the state and federal level, while the internal vice president tackles student organizations and local affairs such as campus safety. For example, work on tuition affordability can be split between UO’s own administration, as well as stakeholders outside of the university. Gimm herself has been involved with advocacy on this issue since her first year at the UO.

“We can anticipate every year that there is going to be a tuition increase,” Gimm said. “If we want to push for institutional changes, sometimes we have to take that to the state level and lobby for it,” Gimm said.

Gimm began her involvement on campus through the UO’s multicultural centers, but felt these organizations’ grievances were not being well-heard by student representatives in student government.

For Gimm, the ability of student government to help students of all backgrounds find out their interests, and fund these programs, is often misunderstood by her fellow students at the UO.

“We have a lot of power, but despite that, no one cares,” Gimm said.

The ASUO allocates funding for student organizations through an incidental fee, with more autonomy over student fee levels than at OSU, according to Schenk. Unlike the ASOSU, the legislative branch of ASUO is solely composed of a Senate, while OSU students are represented in both a Senate and a House of Representatives. The ASUO Senate has four finance committees that propose fee levels to the full Senate and President, who can approve or deny the funding requests, much like the ASOSU legislative and executive branches.

According to ASUO Senate President, Lauren Young, while this funding predominantly goes to established programs such as student tickets to Duck athletic events and free student bus passes in the Lane Transit District, the Senate also allocates surplus requests made by student groups and campus departments. These requests include opportunities to attend conferences or put on events.

“The way we allocate money is whether or not it aligns with the ASUO mission statement and whether or not they are using funds that they have in their account as well,” Young said in an email. “I have been to a lot of events that Senate helped put on for different multicultural student groups on campus and they have been huge successes and a lot of students really enjoy them.”

The size of the unallocated pool varies each year depending on enrollment and whether or not there is money left over in student organizations’ budgets from the previous year, according to Young.

The amount of funding available for student groups to request is one part of a much larger whole.  ASUO’s Finance Director, Zachary Rentschler coordinates between the Senate’s four finance committees and the executive branch.

“I’m the day-to-day person representing the president at those finance committee meetings to make sure communication goes both up and down the chain of the budget process,” Rentschler said in an email. “Last year, the overall budget was $16,557,901 dollars.”

Beyond having a single chamber rather than two, Rentschler explained a key difference he sees between the ASUO and ASOSU legislative branches: how students are represented. Some Senators run to be members of one of the four budget committees, while others are elected to represent their academic majors or departments and serve on university committees.

At OSU, 12 Senators are elected to serve on behalf of all students, while 20 House members represent the undergraduate student body and up to five graduate students also serve as Representatives, according to the ASOSU Constitution. Another difference between schools is the student fee process, with a single Student Fee Committee under the executive branch making recommendations to the legislature for 10 fee-funded units.

According to ASOSU President Simon Brundage, while the two organizations have worked together on legislative advocacy throughout the OSA, as well as issuing joint statements on safety around Halloween, the groups usually focus on issues specific to each campus.

“I would say there is a lot of room for future collaboration,” Brundage said in an email. “ASOSU is currently working on developing an off-campus housing database, and we know that ASUO has developed such a database. Indeed, getting insight from them may accelerate the process and allow us to expedite our own inner workings.”

Schenk met with Brundage and ASOSU Vice President, Radhika Shah, at an Oregon Student Association Board retreat over the summer.

“I’m really excited to collaborate with them in the future, whether it’s tuition this year or other issues where we need more student power,” Schenk said. “Even though we are rivals, Beaver versus Ducks, it is great that we can work together on building student power.”