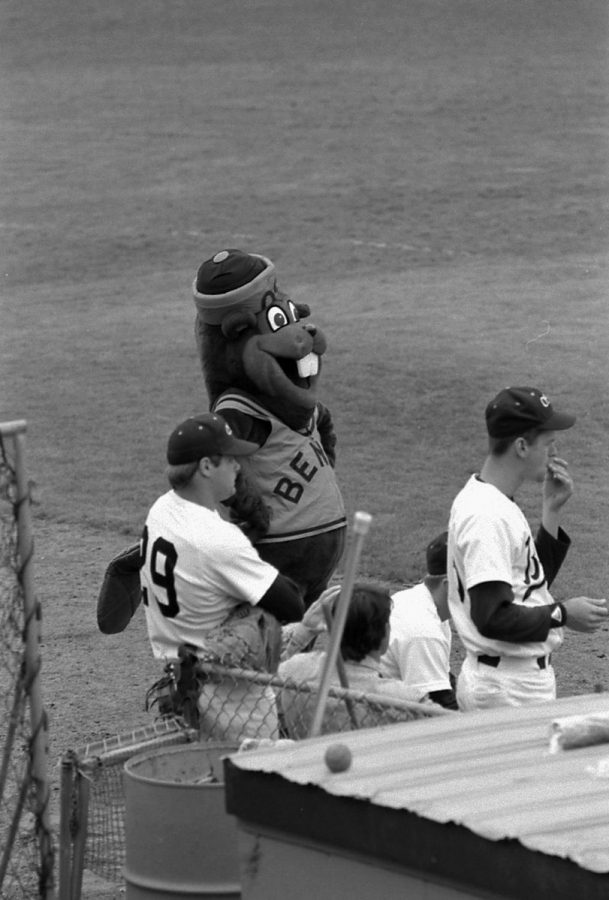 Benny Beaver watches the baseball game in 1988. The original mascot outfit was created by Ken Austin in 1953.

According to Mike Dicianna, the first mascot of OAC (during the 1930s to the end of the 1950s, OSU was known as Oregon State College, and before that, Oregon Agricultural College; it wasn’t until 1961 that the name of the institution changed to Oregon State University) wasn’t even a beaver, but a coyote named Jimmie. The first instance of an OAC Beaver mascot was in the 1920s, when OAC students found Bevo the beaver caught in an eddy in Marys River. Bevo was then adopted as the University’s mascot. The first use of the name “Benny Beaver” was applied to the plaster copy of the original cast metal statue. It was a replacement for a cast metal Beaver statue used by the Yell Kings and Rally Squad in the late 1920s.  It was so heavy that it was towed around the field on a small trailer.  What happened to the original metal Beaver is unclear, but it was stolen at one point in the 1930s (Ducks were blamed).

“My identity was unknown at OSC while being the first Benny Beaver and they would always ask my girlfriend in the stands who was inside that costume when I would come up to her during the games,” Ken Austin said in an email. “My fellow fraternity members all knew I was Benny and would give me a hard time—all part of the fun of being Benny.”

“I would say he represents what we represent, a lot of grit and toughness,” Fenk said. “He’s a builder.”

Additionally, Benny Beaver reflects all assets of the University, according to Benny coordinator.

“Benny is literally the entire institution, you know?” Benny Coordinator said. “Benny definitely has certain departments and connections throughout the university that utilize and embrace him more, but we’re expanding his abilities to span across the entire university and state. Benny represents athletics, academia, every direction that OSU goes.”

With Benny Beaver being the official OSU mascot, Austin was able to travel to away athletic events and represent OSU as the mascot.

“I was able to travel with the rally squad to a Stanford game in California,” Austin said via email.  “After crawling up the goal post, the Stanford rooting section called me turkey, so the fraternity brothers would chant, ‘Hey, Turkey,’ just like they did at Stanford.”

According to Austin, he was a dedicated OSC athletics fan before his time as an OSU student.

“I think I have bled orange ever since my summer school experience in 1942 when I got to go to the 4-H summer school program at Oregon State College,” Austin said in an email. “I don’t think I missed many OSC football games while I was a student—even traveling to those that I could when they were out of town.”

While attending OSC, Austin competed in track and field.

“I, personally, was involved with athletics from my second term of school all the way through my sophomore year as a quarter miler on OSC’s track team,” Austin said in an email. “I am proud to have lettered in my freshman year in 1950.”

According to the OSU Special Archives, after graduating from OSU as a second lieutenant in the Air Force with his degree in industrial engineering, Austin would serve in the armed services until 1958. He then moved on to various positions until he and his wife, Joan Austin, founded the Austin Dental Equipment Company, or A-Dec, in 1964. The company would gain international reputation as a leader in its field in the years to come.

“It is very humbling. I had no idea, when I set off for OSC, that any of these things would happen,” Austin said in an email. “I’m very grateful to OSU for letting me stay in school with such poor grades.”

Austin approached performing as Benny with no experience whatsoever.

“I had no coaching as to how to perform as Benny because it was so new, but as you can imagine from a recent PBJ interview, I acted more like a rodeo clown than a student mascot,” Austin said via email. “As a matter of fact, the Barometer published an article in 1952, ‘Who is the Student Dressed like a Beaver that Acts Like a Jack Ass?’”

The position of Benny Beaver comes with high expectations according to Benny Coordinator.

“It’s a huge responsibility, but I’m most grateful to be able to work with Benny and athletics,” Benny Coordinator said. “My family is a big athletics family, and I’m from a small town in Southwestern Oregon. I’m thankful I can come here to represent my city and my family.”

According to Austin, he enjoys connecting with the university’s current Benny Beaver.

“It’s always special to be around the current Benny Beaver and have someone introduce me to him/her. I enjoy trying to talk to Benny because they usually will not talk back.” Austin said in an email. “The most special event as the old Benny was when Benny celebrated his 60th birthday on Reser field along with the current Benny Beaver.”

Benny Beaver and other long-term traditions are held sacred at OSU, according to Benny Coordinator.

“I think OSU is very dedicated to traditions for long-time fans, either athletics, alumnus or otherwise,” Benny Coordinator said. “Our goal is to make a place where everyone can feel welcome regardless of age, gender or sex.”

The OSU heritage runs deep into the years past graduation, according to Austin.

“My late wife, Joan Austin, and I have always been very proud to be Beavers,” Austin said in an email. “We were both very grateful for all the things OSU did for both of us. It brings me great pleasure to be able to give back to OSU.”

Ken and Joan Austin have given much of themselves back to OSU programs; Austin Hall is built in their honor and houses disciplines focused on business education, according to the OSU website.

According to Fenk, OSU emulates Beaver behavior when establishing programs, whether it be involved with football, basketball or business.

For Austin, his experience as a Benny Beaver alumnus has come with its own unexpected challenges.

“I am sorry to say that when I meet a Beaver alumni for the first time, in certain situations, I have to tell them I have a secret,” Austin said via email. “They ask what the secret is and I tell them I was the first Benny Beaver. It’s amazing how many free desserts I get at restaurants when I have a server that is an OSU Beaver believer.”

Ken Austin’s Benny Beaver tradition has persisted through 67 years of OSU history. With time, however, comes change, according to Austin.

“I’ve seen many changes. Change is inevitable,” Austin said in an email.  “I look at it from a positive view that change is good, even though it’s different. Times change.”