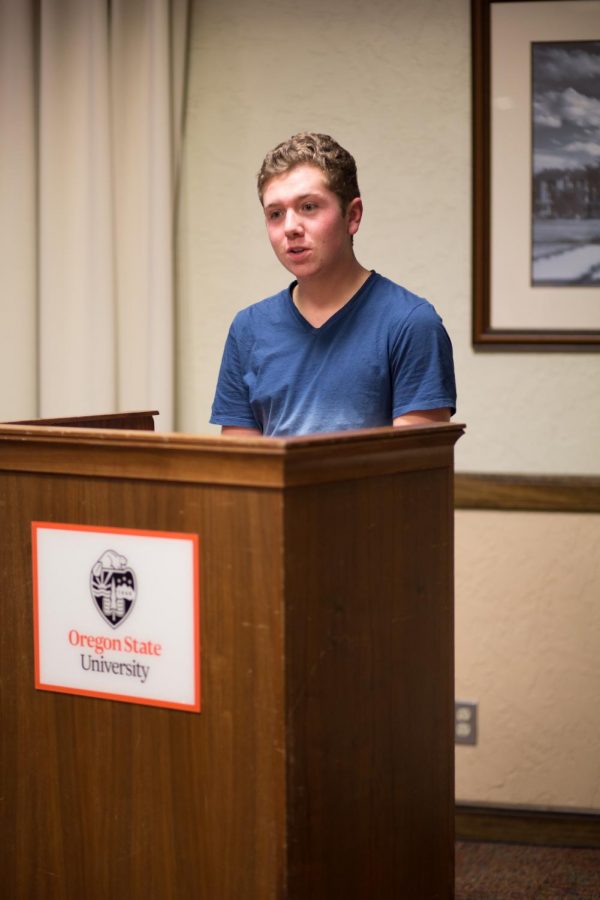 Candidate information sessions for this year’s Associated Students of Oregon State University elections will be held in November, two weeks earlier than last year. Attending these sessions is the first step in running for ASOSU office, with the campaign season beginning formally in late January and voting in February.

According to Radhika Shah, the ASOSU vice president and chief elections officer, this decision was made to ensure OSU’s student government is competitive with hiring for other departments and organizations on campus, such as Diversity and Cultural Engagement and University Housing and Dining Services.

“If they realize later on that that’s not something that they want, it is easier to withdraw, but you kind of miss your opportunity if you are on the edge and then do not do it,” Shah said.

These informational meetings help interested students understand the elected positions in the legislative and executive branches, from President, Vice President and Speaker of the House, to members of the Student Fee Committee, Senators and Representatives, according to Shah. The information sessions will also go over the rules governing the election itself, such as not campaigning in classrooms.

According to Drew Desilet, the faculty adviser for ASOSU, all decisions are made by students, but the conversation around timeline changes began 2 1/2 years ago when he made a presentation to the House and Senate suggesting that the elections be moved from spring term, which was when they were held at that time. Beyond giving more time to turn campaign platforms into position descriptions, holding elections earlier also allows more time to transition students into their new roles. While this year’s election timeline change is focused on ensuring a smoother transition for the President, Vice President and Speaker of the House, it also has an impact on students running for other positions, Desilet added.

“No matter when you set the deadline to file, you are always going to run the risk that there is somebody who wants to run for that position who files after that deadline,” Desilet said. “We are never going to have a perfect deadline to meet everyone’s potential needs to decide whether or not they want to run.”

Shah also voiced this concern, stating that the Elections Committee of six she oversees will continue the deadline conversation as later dates are finalized.

Josh Kaufman, Elections Committee member and ASOSU Judicial Council chair, expects that the earlier filing deadline could potentially reduce the number of candidates who choose to run, especially those new to ASOSU.

“I wouldn’t expect voter turnout to be significantly affected,” Kaufman said via email. “The big benefit to this is that it will give ASOSU a much larger pool of applicants for our hired positions.”

According to Shah, last year’s ASOSU Vice President Brett Morgan chose to limit the voting period based on higher turnout on the first and last days, claiming that this higher overall voter turnout in the election was what brought her, along with current ASOSU President Simon Brundage, into office.

“I’m hoping that it will increase voter turnout,” Shah said. “You should have at least three weeks before voting that people know that elections are happening, so hopefully it helps.”

According to Brundage, he thinks overall voter turnout will rise thanks to an increased focus on outreach and promotion, two weeks of campaigning and a week-long voting period, as opposed to one that lasts for two days.

“If you give them a week, you are still more likely to rally more folks to vote overall, so we will see what ends up happening,” Brundage said. “I am willing to wager that we will get over 15 percent.”

Other than the timeline adjustments, no other fundamental changes to the elections process are being implemented or considered. However, some rules will be clarified, according to Brundage. For example, campaigning next to voting booths is considered influencing the vote, and will hence be policed. Another potential area for reform is the funding limit for an individual’s campaign, currently set at $300, Brundage added.

“It is always a really constant struggle because you want to increase the cap so that there is more promotion, but you also want to keep it low so that it is a much more accessible election for students who may not have the economic means to run otherwise,” Brundage said. “I have a feeling we are going to keep the cap at the same rate if I was to speculate.”

An aspiring president and vice president pair cannot pool funds with other students running for positions in Congress, nor can students run as a slate by forming political parties through shared slogans, according to Shah. These efforts to collude will be watched with a close eye by the Elections Committee.

“Candidates should know even when they are considering this that it is a really rigorous and hard process; I think Simon and I both still think that it was the hardest period in our life that we have ever undergone,” Shah said. “It is very mentally taxing, so just preparing yourself over winter break, really thinking what self-care looks like for you and knowing that it is going to be really mentally challenging, but that it is temporary and you will pass through it.”

Brundage’s advice for any student considering running for office is to have a plan before filing, to pay attention to the platform an individual or presidential/vice presidential ticket intends to run on, as well as to the groups a candidate wants to speak to and how they plan to advertise their candidacy.

“Elections, just a full disclaimer for those who are interested in running, they are a really chaotic time of year,” Brundage said. “I would wager a guess that for both Radhika and I it was probably the hardest experience we have ever gone through. It is emotionally grueling, it requires a lot of strategy, a lot of pre-planning, there are just a lot of different facets that you have to consider, and at the same time, you have to be a student.”

Kaufman, who has held positions in all three branches of ASOSU, advised candidates to pack their schedules completely during the campaign season.

“If a candidate for a big office ever finds themselves without something to do during that time, they’re probably losing,” Kaufman said in an email. “I’d also stress the importance of building a team around oneself. It’s something that I didn’t do a great job of, but it can really help take the pressure off.”

According to Shah, she intends to make herself available as a resource for any student interested in running for office.

“I will tell you what I would tell anyone else, but just know that you can ask me anything, I am a pretty open book about what this job actually requires and what we actually accomplish on campus,” Shah said. “Also, I am a support system for you. Obviously I am not a qualified mental consultant, but I will be there to support whatever candidate in whatever way that they need.”